Government close to getting agreement on the extension of Military Courts 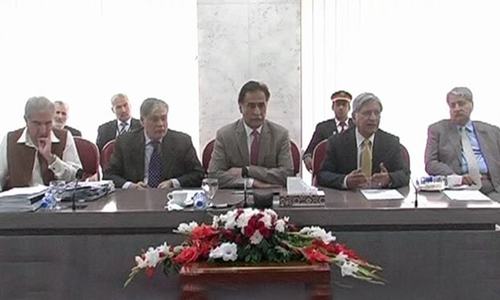 In a meeting held today PML-N and PTI parliamentary leaders have decided to extend the tenure of the military courts for a period of two years. The subject has been controversial since the beginning of this year when they expired in January, 2017.

The military courts were set up, under the 21st Amendment in January 2015 and were to last for two years, right after the Army Public School (APS) attack in December 2014, in Peshawar. Tuesday, parliamentarians took the decision to extend these for another two years till January 2019.

The government was lobbying for the extension to be for three years, however, the opposition parties were extremely reluctant to have military courts at all. The dialogues between several political parties and the government were carried out based on two important points.

One, when the parties were finally reconciled to the idea of extension they only wanted it for one and half years, whereas the government proposed that the extension should be given for three years. The second issue was over Article 175 (3) being amended. The opposition claimed that in case the amendment was put into effect, the military would use it to victimize political workers from the parties.

To cajole the parties the government has drafted an amendment to the constitution (Article 175 (3) which made it easier for the opposition parties to reconsider their stance on the issue.

The article 175 (3) explains that “The Judiciary shall be separated progressively from the Executive within [fourteen] years from the commencing day”.

“Despite our differences with PML-N, we have agreed on the extension of military courts in greater national interest”, said Pakistan Tehreek-e-Insaf Vice Chairman Shah Mehmood Qureshi. He said that after the two years are over, cases pending in military courts would be transferred back to anti-terrorism courts.

The draft will be presented in parliament on March 6.

Read more: Where is the Pakistani government and what exactly is it doing if anything?

In his address to the media on Tuesday, the Mutahida Qaumi Leader (MQM) leader Farooq Sattar stated that, “PM Nawaz should first address our concerns on the issue of terrorism”. “He should at least confess about his party’s incompetence before the Parliament,” he further added.

Pakistan Tehreek-e-Insaaf (PTI) leader, Imran Khan said that PTI will not be attending the All Parties Conference (APC) which is being called by the Pakistan Peoples Party (PPP), since they have agreed to military courts.

PTI will not be attending PPP-called APC as Parl Parties ldrs’ mtg has agreed to mly courts Constit Amend Bill to be tabled in NA on 6 March
— Imran Khan (@ImranKhanPTI) February 28, 2017

PPP did not attend today’s meeting and is still not agreeing to the governments proposal on military courts, they have called a multi-party conference on March 4 to discuss the matter with other politicians.