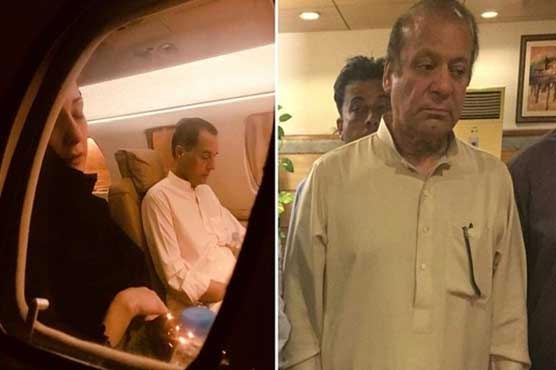 Former Prime Minister Nawaz Sharif, his daughter Maryam Nawaz and son-in-law retired captain Mohammad Safdar have been extended three-day parole to attend the funeral ceremony of Begum Kulsoom Nawaz in Jati Umrah—who passed away on Tuesday in London Hospital. Earlier, reports had emerged in media suggesting that Nawaz was not willing to sign the Parole papers and Maryam had also supported her father’s decision. Eventually, former CM Punjab, Shahbaz Sharif instead signed the papers.

The Sharif family had requested for the five-day parole, however, the government extended it for three days. According to the Information Minister Fawad Chaudhry, Prime Minister Imran Khan had directed the authorities to facilitate the release of Nawaz Sharif and Maryam Nawaz on parole and assist in the shifting of the body for burial.

The wife of PML-N’s supreme leader Nawaz Sharif passed away at London’s Harley Street Clinic on Tuesday after a year-long battle with cancer.

The Punjab government had initially released the family on a 12-hour parole to attend Begum Kulsoom’s funeral. According to the Punjab government, “the extension will be in effect from midnight and will expire on Saturday night and in case of a delay in Begum Kulsoom’s funeral, the parole will be further extended.” The arrangements have been made for the burial of Begum Kulsoom at Jati Umra on Friday afternoon. Following the release orders, Sharif family members were escorted by police to the Nur Khan airbase from where they were flown to Lahore.

The grief-stricken images of the family emerged on the media when they prepared to leave Islamabad airport. The sources claim that Nawaz’s health has deteriorated since returning to his house. Therefore, he is unable to meet visitors arriving at Jati Umra to extend condolences over his loss. Other members of the family including Hamaz Shahbaz and Salman Shahbaz are meeting the guests in the absence of their father Shahbaz Sharif—who left for London to bring back Kulsoom’s body.

Since Nawaz’s both sons—Hassan and Hussain Nawaz are not returning to Pakistan for the burial because of legal challenges facing the family in Pakistan; Shahbaz especially went to accompany the sister-in-law’s body from London. Former CM Punjab will attend the funeral of Begum Kulsoom Nawaz scheduled to be held tomorrow in Regent Plaza Park. The body of former first lady will be flown from Heathrow airport on Thursday at 10 pm PST via PIA flight PK-758.

Pakistan Muslim League-Nawaz (PML-N) leaders and family members of Sharif’s have been arriving at Jati Umra residence since last night to extend condolences. Amid the influx of a large number of people, security has been beefed up around Jati Umra and traffic police have taken the necessary measures to facilitate the transport. The wife of PML-N’s supreme leader Nawaz Sharif passed away at London’s Harley Street Clinic on Tuesday after a year-long battle with cancer.

Political leaders and civil society have praised the deceased over her brave fight against the deadly disease. During Nawaz’s imprisonment after Musharraf’s coup in 2000, Kalsoom Nawaz remained defiant and kept the party together for a short span of time as the president of the PML-N. She is also credited for putting Nawaz on the path of reconciliation with Benazir Bhutto.