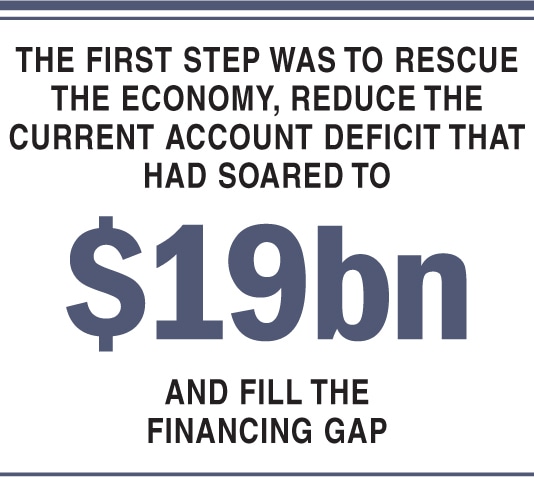 With elections just around the corner – the Government of Pakistan has decided to borrow an additional $450m on a short-term facility from a Credit Suisse led a consortium of commercial banks, to improve the dwindling foreign exchange reserves. Pakistan’s foreign currency reserves are falling at staggering levels (close to 25% this year). This has triggered the government to sign two loans of worth $650 million earlier this year and now avail this short term facility.

Overall, in its current tenure, PML-N’s government has taken huge $35 billion in new foreign loans so far to finance the new infrastructure projects, almost half of it is to repay the existing loans debts and interest rates.

Does Pakistan have enough tendencies to build up enough resource power to avert the current trend? Pakistan must show restraint in its spending and more sobrieties going forward on the external front. Otherwise, things can get messy, if left unaddressed

It is not clear what interest rates the government will be paying for this short-term facility. It is an unusual source of foreign finance for the government. This is its third loan agreement with Credit Suisse.

Despite witnessing a hike in exports, the import bill has continued to surge at even higher levels, one reason is the import of heavy machinery for CPEC.

Read more: Does the growth in FDI depict the true picture of Pakistan’s…

Currently, Pakistan has less than 3-months of foreign reserves & situation is becoming increasingly precarious. This fresh injection of cash is much needed to cover the three to five months of imports.

Hints of positivity on the Economic Front

As per a recent report by the SBP, FDI has taken a positive turn and grew by 56 % in the first quarter of 2017-18 as per the report by the SBP. Similarly, on the external front, the growth in exports and remittances also portray the encouraging signs for the economy.

But, the magnitude of increase has not been enough to overcome the higher number of imports. Pakistan, being an underdeveloped low-income country, savings are scant and are not enough to allow for the adequate investment.

What if the billions secured on loans for the energy and other infrastructure projects are partly eaten up by corruption or get used on other non-productive uses?

Resultantly, the government has no choice but to secure loans from external sources. The FDI investment, exports, and remittances—which are non-debt creating inflows fail to build up enough resources to meet the financing requirements of the country.

The surge in debt to GDP ratio from 60% in the financial year (FY) 2013 to 67% in FY2017 is a concern but, given the kind of capital investment taking place in the country, it seems understandable, especially if it can realize its potential and deliver economic growth in the long run. In the short term, however, it has led to the substantial hike of at least $5.8 billion in the foreign debt servicing in 2017-18.

Economists in Pakistan, as elsewhere, mostly remain divided on the state of the economy. With some citing, that the imports will bring considerable benefits in the subsequent years. Optimistic economic analysts believe that massive investments in energy and high-tech product require imports which are currently creating an exports and imports gap. The imports of machinery and other intermediary goods are termed as the investment in the future of Pakistan. However, due to the acute energy shortages, and uncompetitiveness, exports have failed to flourish in the past.

Due to the acute energy shortages, and in-competitiveness, exports have failed to flourish in the past. The imports of machinery and other intermediary goods are termed as the investment in the future of Pakistan.

For the time being, it is expected to increase the twin deficits leading to further reduction in the reserves by approximately $3 billion. According to the experts, the deficit will start improving in 2019. Therefore, there is no need to panic as the economy continues to grow at steady rate and borrowing is crucial to sustain and guide the economy to the right path for the future.

Pessimists depict a rather gloomy picture, though.

The positive rhetoric is appreciated as long as it can deliver. But, the opposition has also mounted an attack on the government over the corruption in CPEC projects. What if the billions secured on loans for the energy and other infrastructure projects are partly eaten up by corruption or get used on other non-productive uses? It can severely damage Pakistan’s envisioned ability to pay debts and leave it in disarray.

Some economists believe that accelerating growth story built by the economists working for the government is constructed wrongly on the assumptions that imports will pay in future. Will the healthy imports which are supposed to enrich our economy payoff in future? The argument has not held in the past. The majority of the import bill is coming from oil imports and consumer items. The government on Monday introduced an SRO duty on many consumer items to curtail imports. However, Pakistan still needs energy, it does not have enough local resource power to avert the current trend.