For anyone living in Pakistan, overloaded trucks with brimming jute bags and various paraphernalia quite literally falling off the sides are a common sight. Clothed in their traditional truck art, these vehicles mask their hazards well; road accidents, road degradation due to unreasonable weights, and long-term deterioration of the vehicle itself are just some of the hidden risks associated with this overloading.

Pakistan earlier formulated a policy to deal with this issue in 2007, but the implementation is near nil. In light of this, the government has introduced a policy of limiting weight carried by 50% per axle. This could put a catastrophic burden on the industry overall and create a need for up to 200,000 additional trucks for raw material and heavyweight product transportation. 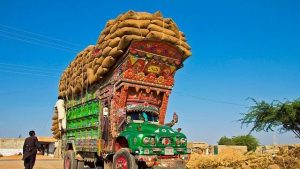 According to a Pakistan Institute of Trade and Development (PITAD) report funded by the European Union, the 2007 policy recognized that the majority of heavy trucks in the sector were assembled in informal backstreet operations with little to no regard for international industry standards. The bigger 2 to 3 axle trucks that dominate the industry are manufactured in these operations at a cost of around 2 million rupees, while Euro-II specification compliant trucks often reach prices of around 7-9 million rupees.

These informally assembled trucks have incredibly high carbon emissions, low-quality assemblage which easily breaks down and a short life span to boot. With consistent overloading, these trucks break down a lot more often than they otherwise would. This explains why the government would want to limit the load, but still begs the question of how the industry is expected to bridge a gap of 200,000 trucks overnight.

The bigger and more organized trucking companies in Pakistan will be the least affected by this policy as they tend not to overload and are more compliant with regulations because of their massive scale and modern fleets. The small operators with fleets between 1 and 5 trucks which make up and estimated 80% of the industry will be the worst affected.

The largest of the fleet operators in Pakistan is the National Logistics Cell (NLC). The National Logistic Cell (NLC) was created in 1978 by the Government of Pakistan. It is managed by the Armed Forces for Crisis Management Tasks during natural disasters and emergencies like strikes and port congestions etc. While maintaining those strategic aspects, today the NLC also operates 10% of the total freight market. The NLC’s systems today are technologically advanced and it has installed computerized monitoring systems in its entire fleet of 800 prime movers/heavy vehicles.

One axle load, in short, can lead Pakistan into a complete chaos and civil unrest and more than a trillion rupees revenue shortfall for the government.

It also boasts a network of support facilities all over the country such as Trans-freight stations and workshops, which aid its transportation of palm and crude oil, fertilizer, wheat and other goods. With its massive scale and resources, the NLC is probably the best suited to not only withstanding the shock of a weight-limiting policy like this but on expanding its fleet to meet the sudden new demand that can be created.

The loss of millions of jobs that could come about due to a policy like this can and should be mitigated by larger firms like the NLC trying to cover the gap in the market. The transport sectors being affected will by extension effect all related industries in a powerful way. The cement industry, for instance, is expecting a reduction in sales by 50% because of this policy.

“Not only will the transportation cost of finished products increase but the higher freight of raw material will also leave the manufacturers with no option but to increase cement prices, hence slowing down the entire construction industry, affecting infrastructure projects like dams, roads, and bridges,” said a source in the cement industry.

A policy that creates such strong trepidation within industries must be immediately reviewed and reconsidered. The fears of the cement industry are also just one node in a much larger network of businesses. Virtually no heavy industry can function without adequate heavy vehicles. “One axle load, in short, can lead Pakistan into a complete chaos and civil unrest and more than a trillion rupees revenue shortfall for the government,” said an economic expert.

Previous article‘Butcher of Beijing’, Chinese Li Peng dies at 90
Next articleImran Khan in US: Foreign Aid is a curse on Pakistan

Dr. James Dorsey - 21 October 2021
Iranians surveyed last month by Iran Poll and the University of Maryland’s Center for International and Security Studies were telling Mr. Raisi that they are looking to him to alleviate Iran’s economic and other problems and have little hope that a revived nuclear agreement will make the difference,

Modi and Shah: Anathema of the duo ruling India

Who leads fight against Islamophobia? Pakistan or Turkey?!

US to stop hacking tool exports to Russia, China

KP Government might be slow but it works: A young citizen reflects!

21 October 2021
Previous article‘Butcher of Beijing’, Chinese Li Peng dies at 90
Next articleImran Khan in US: Foreign Aid is a curse on Pakistan

Modi and Shah: Anathema of the duo ruling India

Who leads fight against Islamophobia? Pakistan or Turkey?!

US to stop hacking tool exports to Russia, China

Thanks Pakistan Navy: Indian submarine on back foot

Why it is impossible to accept Savarkar as father of the nation?

Talal vs Iqbal – who is right on Pakistan’s economy?