Govt. has a plan to arrest Ishaq Dar soon 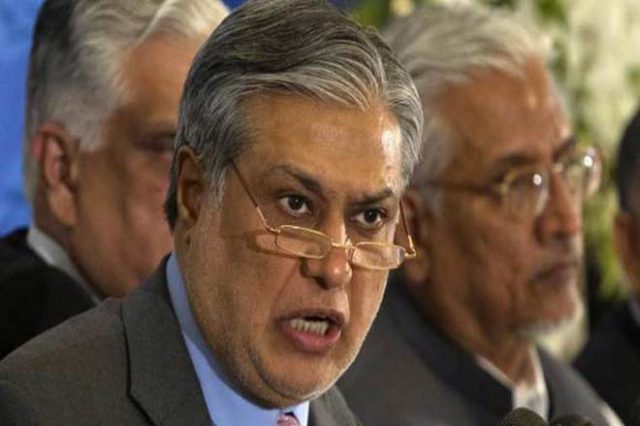 The Special Assistant made these statements while speaking to Dr. Moeed Pirzada on his show “Live with Moeed Pirzada” at GNN. He said that the case against Ishaq Dar is moving in steps and stages. On the first stage, the accountability team of Pakistan has sent a questionnaire of about 26 questions to the British government. “The prevailing investigation is leaving no room for Dar to escape” Barrister Akbar said.

Special assistant to Prime minister on accountability also claimed that Ishaq Dar is not in a stage to move to any other country from England and that is why Dar is filing an application for asylum within the United Kingdom. “As he files asylum, the request of our extradition will come into effect and in the first phase, he will be arrested. In the later stage, we will extradite him due to the lack of an extradition treaty with England; Dar would not be able to escape from England.” the Special Assistant briefed.

He also said that because of fear of security and in an attempt to change narratives, Ishaq Dar is appearing in live programs to escape from accountability by explaining his position. “Soon the process for extradition will be started against Hassan and Hussain Nawaz, because the court has declared them absconders”, Akbar said.

Read more: LHC allows an ‘indicted’ Ishaq Dar to contest in the Senate…

After listening to the statements of Hamza Shehbaz and Rana Sana Ullah about the current wave of accountability, Special Assistant to Prime Minister for accountability said that the cases that are faced by these political leaders were filed during their own government. “I am appointed to eradicate money laundering from Pakistan,” Shahzad Akbar said.

He also claimed that he is sticking to his promise of bringing back Ishaq Dar but for now, they are unable to extradite Ishaq Dar due to the lack of an extradition treaty with the United Kingdom. Special Assistant to the Prime Minister on Accountability Mirza Shahzad Akbar on Saturday, 22nd December, had said that the report of joint investigation team (JIT), probing money laundering case against Pakistan Peoples Party (PPP) Co-chairman Asif Ali Zardari, has exposed ‘Zardari system’ in Sindh.

Addressing a joint press conference accompanied by Information Minister Fawad Chaudhry in Islamabad, Shahzad Akbar had said that Summit Bank was established in Sindh to launder the black money abroad and added that Rs9billion had been transferred via fake accounts of the bank.

Read more: Why is Ishaq Dar in trouble with the FIA and NAB?

The advisor maintained that Rs. 60.13 Billion were paid through fake accounts. Last week, Special Assistant to Prime Minister on political affairs Naeem Ul Haq had made a startling claim on program “Live With Moeed Pirzada” saying that the Sindh government was missing records of Rs. 300 Billion of annual development budget 2017-18 and that all of these funds were misappropriated, GVS earlier reported.

India restores incoming text messages to Kashmir: What it means?