Greece wildfires: a timeline of disaster 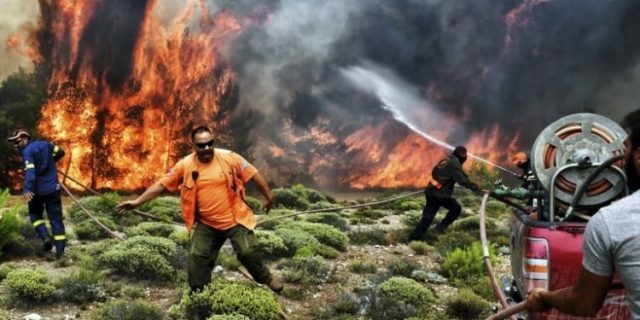 At least 79 people have died in wildfires around the Greek capital Athens this week, among the deadliest blazes in living memory.

“At about three we were transferred to Rafina and we were put in a local leisure center where they gave us blankets and drinks,” said Stella Petridi.

Here is a timeline, pieced together by AFP from witness accounts, of how the fires spread in one of the seaside villages affected (all times local):

As holidaymakers were just beginning to enjoy some respite from the day’s soaring temperatures, Debbie Vinzani, a tourist from the United States, saw the first flames. “It was supper time and we saw the fire on the mountain across. The hotel staff was rather cool saying that every year we do have fires.”

Read more: Greek fires a tragedy but not a surprise

At the same time, Stella Petridi, a retired resident of the seaside resort of Mati that was later consumed by the flames, noticed the smell of smoke. She was at church but hurried home to check on her pets.

“I put the key in the door but smoke was already coming from inside,” she said. “My two dogs were dead. “I ran to the beach and with other residents, who were all panicking, and we jumped in the water.”

An hour later, the blaze had reached the perimeter of Vinzani’s hotel. “I saw flames out of the window, the big pine in the yard of the hotel got on fire,” she said.

Mati resident Andreas Matsios said that by 19:00 most parts of the village were ablaze:  “The pines were burning, we were waiting for the gas canisters to start exploding.”

By 20:00, the staff at the Mati Hotel had ordered guests to stay in the dining room.

“I put a wet towel at my mouth,” said Vinzani. “The staff went outside and with small hoses, they were trying to extinguish the fire. The air outside was so bad that we decided, as we were told, to stay in.”

“It was supper time and we saw the fire on the mountain across. The hotel staff was rather cool saying that every year we do have fires.”

The road out of town was jammed with cars full of people fleeing. Several motorists abandoned their vehicles and headed for the relative safety of the beach by foot. Resident Maria’s house at the foot of the village was by then starting to burn. She draped a wet sheet around her and set off for the next town.

By skirting the gap between the coastal highway and a stretch of beach that ended up incinerated, Maria was able to escape safely.  “If I’d gone straight to the coast I’d probably be dead.”

The first Mati residents reached Rafina, a port town further down the coast, in cars, on buses and even by boat.

“I left on my motorbike but my aunt, who’s 80 and lives opposite, was stuck in her home,” said Anastasios Promponas, who lives in Kokkino Limanaki, a village next to Mati. After calling the police, he was finally able to go back and get her.

A crowd of tourists and locals meanwhile had assembled on the beach at Mati, in the only remaining safe spot in the burning village. Coastguard and police boats began arriving to rescue them.

“At about three we were transferred to Rafina and we were put in a local leisure center where they gave us blankets and drinks,” said Stella Petridi.

As the sun began to rise, fire teams were bringing the Mati blaze under control. Gurmnesh Bisrat, a domestic worker originally from Ethiopia, was among the last to be picked up from the shore.

“I ran and found a beach in Mati and I was waiting in the sea for two, three, four hours. The boat for Rafina arrived at five o’clock,” she said.  “The house was dark, the sky was dark. I saw the flames and ran away without waiting for my boss to lock the house. I was terrified.”