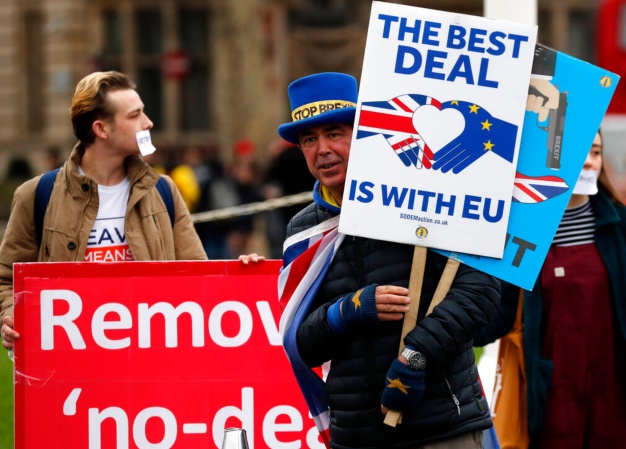 Leaving the EU could cause “untold damage” to Britain’s ecosystems and undermine its attempts to curb greenhouse gas emissions, green groups warned Friday, calling on the government to prioritise the environment after Brexit.

With 80 percent of Britain’s current environmental guidelines — governing everything from air pollution to waste disposal — coming from Brussels, there are fears that ministers are ignoring the ecological fallout of exiting the bloc.

Brexit proponents say that leaving the EU will allow Britain more freedom to set its own laws after decades of taking instructions from Brussels.

“If we have a no-deal Brexit, the government is going to be busy with other things,” said Richard Black, director of the Energy and Climate Intelligence Unit (ECIU), an environmental think tank. “In terms of policy development, there’s an awful lot of catching up to do, frankly.”

The government says it is committed to upholding the highest environmental standards when Britain leaves the EU, with or without a deal. In a speech last year, Prime Minister Theresa May said Britain “will continue to lead the world in delivering on our commitments to the planet”. She promised that EU green guidelines would be adopted into national law after Brexit.

But environmentalists say there is little legislation in the pipeline to ensure Britain toes the line in terms of emissions, conservation and air quality — and virtually no legal recourse if it doesn’t. “It’s instructive that a large number of the cases that end up before the European Court of Justice are environmental,” Amy Mount, who heads the Greener UK Unit at the Green Alliance, told AFP.

“Right now, people in the UK benefit from access to a strong, independent body which has real powers to make governments across the EU enforce their own laws rather than ignoring them.” Britain was taken to the ECJ last year after repeatedly breaching EU-set limits on air pollution.

After Brexit, the government is planning its own domestic watchdog, the Office for Environmental Protection (OEP). It says the OEP “will ensure that this and every future government benefits from the expertise vested in a consistent, long-term, independent body on the environment” and “offer a strong system of accountability”.

Britain was taken to the ECJ last year after repeatedly breaching EU-set limits on air pollution.

But green groups and legal experts have expressed concern over its power and impartiality. Current plans outlined in policy papers state the OEP will have its leadership and funding set by the government. “That doesn’t sound like the strong body we were promised to keep up our environmental defences,” said Kierra Box from Friends of the Earth.

“It’s still far from certain we’ll have even this weak model in place by exit day, which could lead to untold damage to natural spaces and species in the meantime.” Last month the government issued energy and emissions advice to businesses in the event of a no-deal Brexit. It said Britain’s emissions would cease to be covered by the EU’s current cap system.

It said there were “no current plans to introduce additional domestic policy to cover emissions” in the short term, and that airlines would not be subject to any national emissions tax. Black told AFP that failing to account for emissions from aviation — currently responsible for roughly two percent of all greenhouse gas emissions — “does seem to be a hole”.

“It’s a really big problem because all the projections show aviation growing as a share of the UK’s emissions well into the future and if Britain is actually going to set a net zero target for carbon emissions, then everything you emit you’ve got to absorb,” he said.

Britain has made solid progress on emissions cuts, with 2017 levels 43 percent lower than in 1990. But the fear with Brexit is that key ministries such as transport, housing and the treasury may be tempted to seek the short-term economic gain of environmental deregulation — and face few barriers against doing so.

Current plans outlined in policy papers state the OEP will have its leadership and funding set by the government.

A no-deal Brexit, for example, would see Britain lose access to the EU database of safe chemicals, be uncovered by sea pollution protections, and freed from the threat of ECJ rebuke over air pollution. As one of the EU’s biggest waste exporters, a no-deal could see rubbish pile up, hurriedly buried or burned in incinerators — all with concomitant environmental costs.

Brexit proponents say that leaving the EU will allow Britain more freedom to set its own laws after decades of taking instructions from Brussels. But according to Box, Britain’s track record of environmental foot-dragging within the EU offers no assurance it will prioritise green initiatives when it leaves.

Indian minister: Muslims should have gone to Pakistan