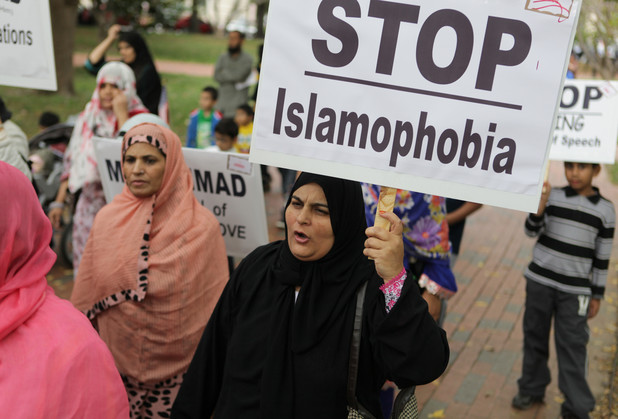 The Muslim world is currently facing myriad internal and external challenges. So far as the internal challenges are concerned, it is marked with deep social, political, and sectarian cleavages coupled with ever burgeoning economic blues. Externally, the most pervasive challenge that the Islamic world is confronting with today is mushrooming islamophobia. Anti-Islam lobbyists have launched a nefarious campaign to undermine the swiftly growing influence of Islam by equating it with terrorism and intolerance. Therefore, Islam, its founder, and its adherents are repeatedly subjected to constant censure by the Islamophobes.

Recent attempt of Dutch lawmaker Greet Wilders to denigrate the Holy Prophet (S.A.W) through holding the cartoon contest is testimony to the fact that Islamophobia is increasing at an exponential rate in the non-Muslim world especially the west.  Realizing the gravity of the issue, OIC in collaboration with Turkish Ministry of justice had organized two days seminar (17-18 November 2018) in Istanbul, Turkey. The major focus of the event was to detect the causes of the mushrooming islamophobia generally in whole the world and exclusively in the west.

Though late, yet it is a good initiative undertaken by the second largest organization and one and the only voice of Muslim populace around the globe. In fact, surging islamophobia is a backlash to the rapid growth and widespread embracement of Islam generally in the world and particularly in Europe. A religious forecast for 2050 PEW Research concludes that global Muslim population is expected to grow at faster rate than the non-Muslim population. Therefore, anti-Muslim forces are employing all of their available resources to arrest the ballooning tentacles of Islam.

Moreover, there is also a ubiquitous paranoia in the western world that Islam may replace as an alternate dispensation to their years-old political, social and economic entrenchments and thereby put an end to their luxurious and immodest style of living. Sadly, the role of OIC to counter the negative propaganda against Islam in capacity of being the only Muslim and the second biggest organization after UNO the Muslim world has been quite dismal. It has abjectly failed to fulfill the aspirations of the Muslim ummah.

It has done nothing worthwhile to effectively address the maladies that affect the Muslim nations in any tangible form and project the true image of Islam that is indubitably the very antithesis of what is being promoted by the anti-Islam forces. “A toothless paper tiger” this is how the OIC is dubbed by its critics. The main reason and objective for which OIC was established in 1969 i.e. to safeguard and protect the Muslim rights and interests globally has not been achieved.

This gloomy picture of the Islamic world is not limited to the economic and social spheres only; it also miserably lags behind in the realm of education and technology. None of its educational or research institutions or centers finds place in the top 100 in the world. There are multiple politico-socio-economic and religious causes behind the failure and the sorry state of affairs of the OIC. The most prominent among them is the lack of unity amongst the Muslims. The Islamic world is divided politically and religiously.

Politically, it has been divided into two camps, there are countries belonging to western camp and the others that represent the conservative camp. A continuous struggle is being witnessed between these two divisions. The pro-west camp is keen to implement western political order whereas the opposite camp wants to adopt Islamic political system. Religiously, Shia-Sunni schism has also created a hurdle in the way of success of OIC. The Muslims have never been able to rise themselves above this division and think in terms of being one ummah. This very situation prevailing in the Muslim world gives an opportunity to the enemies of Islam to further their vested interests by engaging Muslims fight against their own Muslim brothers.

The ongoing Shia-Sunni fight in most parts of the Muslim world is part of international intrigue orchestrated by Islamophobes. Additionally, different forms of governments e.g. democracy, kingship, military rule etc are in practice in the Muslim world. Therefore, there is no coherence and harmony in the thinking of the rulers. Inefficient and incompetent leadership is also a major contributor to the failure of OIC. Except Tayyab Erdogan, Mahathir Mohammad and Imran Khan, we hardly find any other name in the Muslim world to be called as a leader.

Economically, most of the Muslim countries belong to the third world and are engaged in developing their respective economies. For this reason, they have to bank on the foreign powers for financial aid. This, in turn, gives an opportunity to the foreign powers to exploit the situation to their own advantage and compel the third world countries to capitulate to their diktat. Furthermore, most of the Muslim countries are utterly backward in the field of science and technology.

When a country is technologically zero and cannot make even a minor part of its machine, how can it challenge a technologically advanced country and face its might? Apart, the absence of strong military power also contributes to the impotence of the organization. Ever since its erection, it paid no heed to strengthen itself militarily and emerge as a formidable force at par with NATO…

This gloomy picture of the Islamic world is not limited to the economic and social spheres only; it also miserably lags behind in the realm of education and technology.

All these aforementioned factors inhibit the OIC to play a significant role in the international arena. This melancholic state of world’s second biggest organization warrants an immediate overhauling and reformation. Following is the prescription to make OIC a vibrant, dynamic and a potent organization of the world.

To cap it all, given the current rise of Islamophobia, OIC could emerge as the most relevant organization of the world by playing the constructive role between the Muslims and the other faiths. It could also serve as a unified, vigorous and collective voice of the 1.5 billion Muslims of the world highlighting the issues related to the Muslim world at international forums and present the true image of Islam that stands for peace, brotherhood, tolerance, pluralism and peaceful co-existence.

Advocate Abdul Rasool Syed is a lawyer by profession and is based in Quetta, Baluchistan. He also has MBA from IBA Karachi. He is passionate about writing and contributes to various publications including Daily Times and Frontier Post. The views expressed in this article are author’s own and do not necessarily reflect the editorial policy of Global Village Space.

Trump Team’s Dark View of Islam: Where its coming from?