Growing tensions between Syrians and Turks in ‘little Syria’ 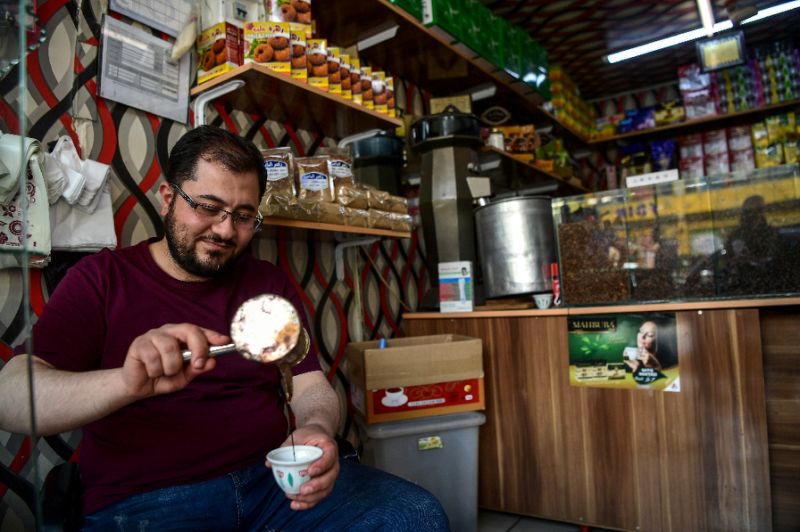 Some call it “little Syria” since it is impossible to walk down the main shopping streets in the southern Turkish city of Gaziantep without hearing traders and passers-by speaking Arabic.

The city of two million lies close to the Syrian border and has welcomed nearly 500,000 of the 3.5 million Syrian refugees who have fled to Turkey since the civil war broke out in 2011.

But it is a cohabitation that is not without tensions, despite reassurances by the authorities.”Here, we can consider that it is the capital of Syria, because there is more of them than us,” says Turkish shopkeeper Adil Bayraz.

“There is a feeling of despair against the government,” he says. “Even those who supported them feel this revulsion.”

Bayraz who has run a grocery store for 30 years, estimates that 80 percent of traders on the street where he is now is Syrian, though another trader a little down the road says the number is 90 percent.

Read more: Erdogan in Britain for talks with ‘valuable’ ally

In any case, Arabic resonates louder than Turkish in this shopping street. Spice shops, hookah waterpipe sellers and Syrian bakeries, as well as restaurants with Arabic-only menus, follow one another along the street.

“Our customers from Gaziantep no longer come here to shop. It has mostly become the market for Syrians,” Bayraz adds, emphasising he gets along well with his neighbours, eats Syrian food and has even learned a smattering of Arabic.

According to Hasan Amanakh, a grocer down the road from Bayraz, shop rents have increased while his revenues have declined.”Since you let them come, do not let them open a shop, they come shop at ours,” he says angrily, addressing the authorities.

Gaziantep mayor Fatma Sahin says the city is a model of integrating the Syrian refugees into Turkish life without causing social tensions.”We have managed to be one of the cities that has managed these difficult times successfully with the least damage for those people who live here,” she tells AFP.

Many Syrians in Gaziantep are grateful to their “Turkish brothers” and say they feel welcome here. It is the case for Mohammad Al-Hamaoui, owner of a small coffee and spice house.

“It has been seven years since I am here so I am known on the street,” he says. “Relations are normal and there is no problem… We go about our business with the Turks and Syrians without any stress.”

But others, who asked not to be named, tell a different story: Syrian shops ransacked, homeowners refusing to rent apartments to Syrians, difficulties obtaining loans or even simply to open a bank account as well as daily anti-Syrian comments.

Spice shops, hookah waterpipe sellers and Syrian bakeries, as well as restaurants with Arabic-only menus, follow one another along the street.

In a January 2018 report entitled “Turkey’s Syrian Refugees: Defusing Metropolitan Tensions”, the International Crisis Group said incidents of intercommunal violence increased threefold in the second half of 2017 compared to the same period in 2016.

“At least 35 people died in these incidents during 2017, including 24 Syrians,” the report authors said, adding the potential for anti-refugee violence was highest in Turkey’s three big cities: Istanbul, Ankara and Izmir. Officials and pro-government media reports usually “downplay tensions”, the authors said, adding that this “stifles potentially salutary public debate”.

Seeking to address this discontent, President Recep Tayyip Erdogan often offers Turk’s reassurances that Syrian refugees are expected to return home. Since 2016, Turkey has launched two military operations in northern Syria to fight Kurdish militia and the Islamic State extremist group but also to create “safe zones” for the return of refugees.

According to Erdogan, over 160,000 Syrians have already returned to these areas.”Ultimately when the security conditions are fulfilled, each will return home, to his own territory,” says Sahin.

The city of two million lies close to the Syrian border and has welcomed nearly 500,000 of the 3.5 million Syrian refugees who have fled to Turkey since the civil war broke out in 2011.

Asked about the tensions, Sahin replies: “We tell (residents) to be patient, we tell them that Syrians are beginning to leave and we are making big investments to meet their needs so that their quality of life does not deteriorate. And they understand us.”

Read more: Erdogan uses high-handed tactics to suppress protesting Turks in the US

Yet this is not enough to convince everyone.”It’s impossible for them to leave because Syria, it’s finished, there is nothing left… it’s a ruin,” says Sinem, a housewife.

She says she will “inevitably” have this question in mind when voting in the parliamentary and presidential polls on June 24. Amanakh also says this will influence his vote.”There is a feeling of despair against the government,” he says. “Even those who supported them feel this revulsion.”

In Mexico, those searching for missing relatives can vanish too