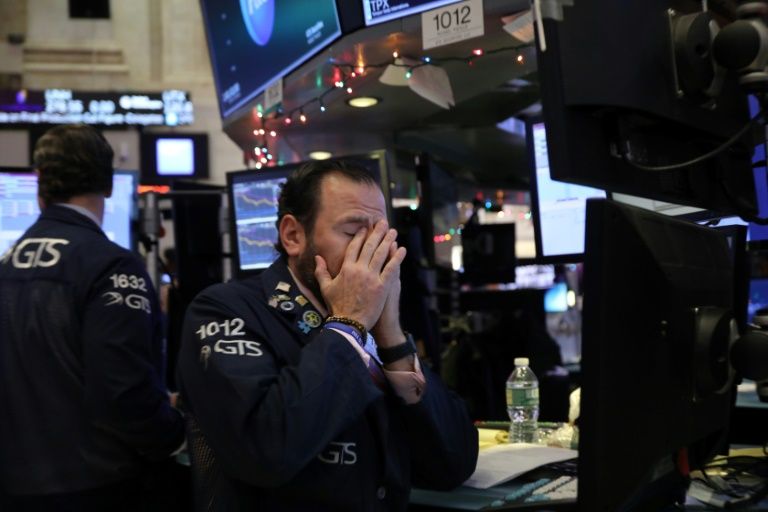 Wall Street led to stock markets lower across the globe on Friday after data showed weakness in the Chinese and eurozone economies, despite further indications Beijing and Washington might be moving to end their trade war.

Signs of easing tensions had helped propel equities higher earlier this week, with both China and the United States seeming to give key concessions, fueling hopes they can eventually resolve their differences.

The survey for France showed business there had flipped into reverse, as the index plunged to 49.3 in December from 54.2 in November.

But data showing that the trade war is already having an impact on China consumer spending grew at its slowest pace in 15 years and factories eased up in November prompted equities investors there to take their gains off the table.

Rosier US retail and industrial data could not assuage fears that growth and the trade spat with Beijing will drag on sentiment. In New York, a sell-off extended recent losses and drove all three major indices into correction a 10 percent fall from recent peaks in October.

“The fears around slower growth rate globally have been confirmed by the fact that the Chinese data were weak,” Nate Thooft of Manulife Asset Management told AFP. But, he said, “I still think the market is reading way too much in it.”

Weakness in Europe and China

In Europe, a survey showed that global trade war fears and disruptions caused by anti-government protests in France pushed business growth in the eurozone to a four-year low in December.

The slide in IHS Markit’s composite eurozone PMI, to 51.3 points from 52.7 points in November, came just a day after the European Central Bank pulled its massive stimulus program that has stoked growth in the single currency area for the past three years.

The euro, pound, and yen all weakened against the dollar, a day after the European Central Bank said it was ending its program of asset purchases which had propped up eurozone growth for the past three years.

The survey for France showed business there had flipped into reverse, as the index plunged to 49.3 in December from 54.2 in November. Tokyo finished two percent lower following a survey of confidence among Japan’s big businesses showed they remain cautious about the global outlook and Hong Kong and Shanghai both lost around 1.5 percent.

On the wider impact of recent popular protests in France against President Emmanuel Macron, he noted that “even if you discount the impact of the yellow vest protests, the underlying story is one of economic weakness in Europe.

The euro, pound, and yen all weakened against the dollar, a day after the European Central Bank said it was ending its program of asset purchases which had propped up eurozone growth for the past three years. The decision came despite ECB boss Mario Draghi’s assessment that there were increasing risks to the economy of the single currency bloc.

In Europe, traders continued in vain to tease out clarity on Britain’s path out of the European Union as Prime Minister Theresa May denied reports that EU leaders had refused her plea for reassurances on her Brexit plan, saying simply that “there is work still to do”. Oil prices fell, with traders also worried about the impact of slower growth, analysts said.