Gulf crisis: Is Saudi Arabia the only bad guy here? 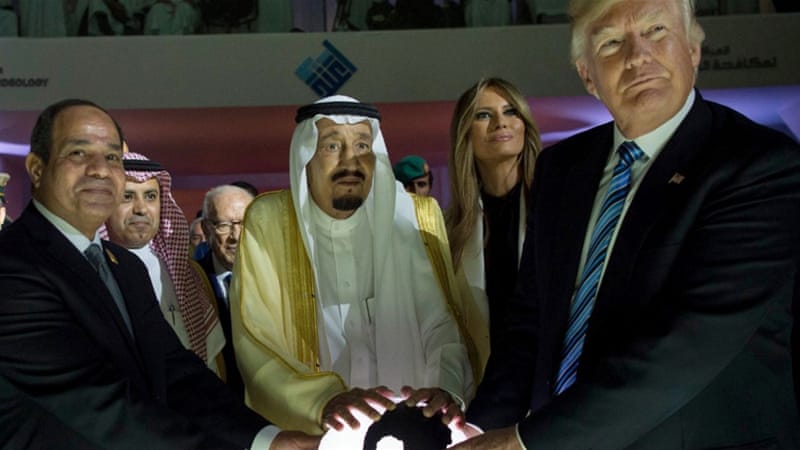 A Saudi and UAE-led campaign to force Qatar to halt its support for Islamists and militants is little else than a struggle to establish a Saudi-dominated regional order in the Middle East and North Africa that suppresses any challenge to the kingdom’s religiously cloaked form of autocratic monarchy.

The Saudi and UAE effort goes to the heart of key issues with which the international community has been grappling for years: the definition of what and who is a terrorist and what are the limits of sovereignty and the right of states to chart their own course.

While Saudi Arabia and the UAE differ in their view of Sunni Muslim ultra-conservatism, they agree on defining political Islam as the terrorist.

It’s a battle that has pockmarked the Middle East and North Africa since World War Two but kicked into high gear with the 2011 popular Arab revolts. Saudi Arabia and Little Sparta, a term used by some US officials to describe the UAE, waged a concerted campaign to roll back achievements of the uprisings.

The two states’ effort has projected Saudi Arabia and the UAE as leaders in the fight against extremism. Yet, if successful, their campaign could empower a strand of supremacist Sunni Muslim ultra-conservatism that advocates absolutist, non-democratic forms of governance, and threatens to perpetuate environments that potentially enable radicalism.

While Saudi Arabia and the UAE differ in their view of Sunni Muslim ultra-conservatism, they agree on defining political Islam as the terrorist because it advocates an alternative worldview or form of governance.

Saudi-Qatar conflict: Setting your own house on fire

The outcome of the crisis in the Gulf, these differences notwithstanding, is impacting the larger Muslim world rather than only the Middle East and North Africa. A Saudi defeat of Qatar would cement the kingdom with its advocacy of ultra-conservatism, efforts to impose globally its anti-democratic values that make a mockery of basic human rights, and exploitation of the moral authority it derives as the custodian of Islam’s two most holy cities, Mecca and Medina, as an almost unchallenged force in the Muslim world.

The irony of the Saudi-led campaign against Qatar is that it pits against one another two autocratic monarchies that both adhere to different strands of Wahhabism, the ultra-conservative worldview that legitimizes the rule of Saudi Arabia’s governing Al Saud family.

Much of the world’s focus on post-revolt Libya, torn apart by armed militias and ruled by rival governments, has focused on the rise of the Islamic State (IS) in the country.

Qatar, like Saudi Arabia, governed by an absolute ruler, who keeps a tight rein on politics and freedoms of expression and the media, is an unlikely candidate for advocacy of greater openness and pluralism.

Yet, in many ways, the two countries are mirror images of one another. Both see strands of Islam as crucial to their national security and the survival of their regimes. Qatar, sandwiched between the Islamic Republic of Iran and the Islamic kingdom of Saudi Arabia, both of which it views as potential threats, sees political Islam, the force that emerged strongest from the 2011 revolts, as the future of a region that is in transition, albeit one that is mired in brutal violence, civil war, debilitating geopolitical rivalry, and Saudi and UAE-led counterrevolution.

Saudi Arabia, struggling with the fact that its four-decade-long public diplomacy campaign, the largest in history, has let an ultra-conservative, often militant, inward-looking, intolerant genie out of the bottle that it no longer controls, sees Madkhalism, a strand of ultra-conservatism that advocates absolute obedience to the ruler, as the solution.

In doing so, Saudi Arabia is perpetuating the fallout of its public diplomacy that has been a key factor in Muslim societies such as Malaysia, Indonesia, Pakistan, and Bangladesh becoming more conservative, more intolerant towards Muslim and non-Muslim minorities, less pluralistic, and less democratic.

It is a strategy that risks nurturing the kind of anti-Shiite sectarianism that serves the kingdom’s purpose in its power struggle with Iran as well as creating an environment that potentially fosters radicalism. Libya, a landscape of rival militias and governments, is an example of the Saudi strategy at work.

Much of the world’s focus on post-revolt Libya, torn apart by armed militias and ruled by rival governments, has focused on the rise of the Islamic State (IS) in the country. Yet, equally devastating for the country has been the proxy war between Saudi Arabia, the UAE, and Egypt that depends on handouts from the two Gulf states for its economic survival on the one hand and Qatar on the other. Libya’s travails that created an opportunity for IS are in many ways the product of battling Gulf states that support groups representing the rival strands of Islam they back.

As a result, Saudi Arabia and the UAE’s darling, General Khalifa Belqasim Haftar, rather than being a beacon of struggle against militant or jihadist Sunni Muslim ultra-conservatism heads a force that is populated by Madkhalists, Saudi-backed ultra-conservatives that advocate a form of governance that in many ways is not dissimilar to that of the kingdom or IS.

Sheikh Al-Madkhali and his followers position Saudi Arabi as the ideal place for those who seek a pure Islam that has not been compromised by non-Muslim cultural practices and secularism.

Led by Saudi Salafi leader, Sheikh Rabi Ibn Hadi Umair Al-Madkhali, a former dean of the study of the Prophet Mohammed’s deeds and sayings at the Islamic University of Medina, Madkhalists seek to marginalize more political Salafists critical of Saudi Arabia by projecting themselves as preachers of the authentic message in a world of false prophets and moral decay. They propagate absolute obedience to the ruler and abstention from politics, the reason why toppled Libyan leader Moammar Qaddafi tolerated them during his rule.

Madkhalists often are a divisive force in Muslim communities. They frequently black list and seek to isolate or repress those they accuse of deviating from the true faith. Sheikh Al-Madkhali and his followers position Saudi Arabi as the ideal place for those who seek a pure Islam that has not been compromised by non-Muslim cultural practices and secularism.

General Haftar integrated the Madkhalists into his fighting force after Sheikh Al-Madkhali called on his followers in Libya grouped in the Tawhid Brigade to join the renegade military commander in the fight against the Qatar-backed Muslim Brotherhood. The integration of the two forces gave the Madkhalists control of key military positions in the port city of Benghazi and elsewhere in eastern Libya, according to scholar and NGO activist Ahmed Salah El-Din Ali.

Madkhalist influence in the region illustrates the kind of society Saudi-backed ultra-conservatives envisions. The alliance with General Haftar has allowed them to gain control of the body that governs religion as well as mosques in areas administered by the internationally recognized government of Libya.

At the core of their high-stakes battle is a struggle over what Islam-inspired worldview will be most prominent in the Muslim world as well as the ability of Muslim nations.

Like in Saudi Arabia, Abd al-Razzaq al-Nazury, a military governor in the region associated with General Haftar and the Madkhalists, banned women from traveling without a male guardian. Mr. Al-Nazury imposed the ban following a visit by Usamah al-Utaybi, a Jordanian-born Saudi Islamic scholar who was a fighter in the US and Saudi-backed jihad in the 1980s against the Soviets in Afghanistan. An outcry on social media forced the governor to cancel the ban.

Similarly, protest on social media, according to Mr. Ali, forced authorities to release three men detained in March by General Haftar’s Madkhalist fighters for planning a public celebration of Earth Day. The fighters charged that the celebration would have been a form of un-Islamic Freemasonry that would have been immoral, indecent and disrespectful of those who had died for the cause.

Ironically, General Haftar’s association with the Madkhalists spotlights the contradictions in the Saudi-UAE-Egyptian alliance against Qatar. The UAE and Egypt share opposition to political Islam with the kingdom but see Saudi-inspired Sunni Muslim ultra-conservatism as an equally potent threat.

The long and short of this is that there are no truly good guys in the battle between Saudi Arabia, the UAE, and Qatar. Nonetheless, at the core of their high-stakes battle is a struggle over what Islam-inspired worldview will be most prominent in the Muslim world as well as the ability of Muslim nations, especially those in Saudi Arabia’s orbit, to chart a course of their own.