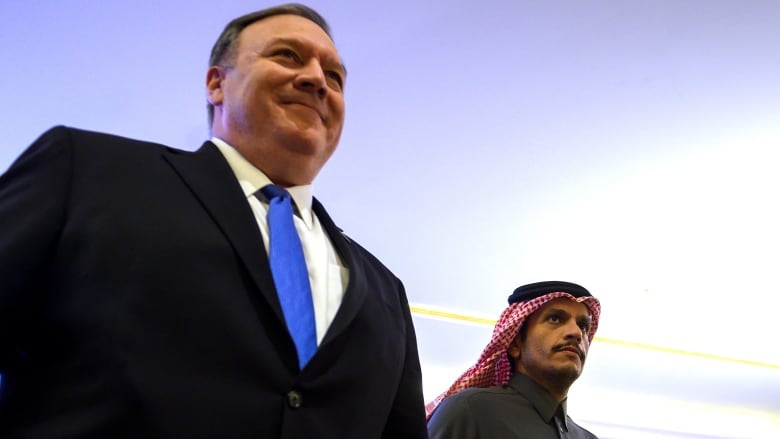 A cornerstone of the Trump administration’s approach to Israeli-Palestinian peace, involving a restructuring of relations between erstwhile Middle Eastern foes appears to be taking shape: Gulf states are making long-standing covert ties to the Jewish state overt without establishing formal diplomatic relations. In the process, the Palestinians are being pressured to fall into line.

Reflecting the divisions among American Jewry, Rabbi Shmuley Boteach organized a full-page ad in The New York Times to denounce Jews willing to meet with the Qatari leader

The willingness of Saudi Arabia, the United Arab Emirates and Bahrain to be more open about their long-standing relations with Israel reflects their growing common interest with the Jewish state in countering Iran and groups that they include in their sweeping definitions of terrorism; countering mounting criticism of their tarnished human rights records by forging closer ties to Jewish leaders in the United States; and supporting US President Donald J. Trump.

The moves boost Israeli Prime Minister Benyamin Netanyahu who has talked for months about ‘breakthroughs’ in Israel-Arab relations and recently asserted that cooperation “is much larger than any other period in Israel’s history”.

Read more: Is Middle East witnessing an end of civil wars and sectarian…

In the clearest sign to date, of an upgrading of ties between the three Gulf states and Israel, Bahrain’s King Hamad bin Isa Al Khalifa authorized Rabbi Marvin Hier, the dean and founder of the Simon Wiesenthal Center in Los Angeles who delivered a benediction at Mr. Trump’s inauguration, to announce a series of gestures towards Israel at a ceremony at the centre’s Museum of Tolerance.

The ink on Bahrain’s declaration of religious freedom had barely dried by the time that the gestures towards Israel became mired in the 3.5-month-old Gulf crisis that pits Bahrain, Saudi Arabia, and the UAE

The Bahrain-funded ceremony was attended by the king’s son, Prince Nasser bin Hamad al Khalifa, who as commander of Bahrain’s Royal Guard and president of the country’s National Olympic Committee has been accused of abusing the human rights of opponents of the government as well as athletes and sports executives who in 2011 participated in peaceful anti-government protests. Bahrain blames the protest on Iran and views Shiite opponents as Iranian stooges.

The center released at the event a Bahrain Declaration on Religious Tolerance authored by King Hamad, the first of its kind by an Arab head of state. Prince Nasser and Mr. Hier signed the declaration at the ceremony.

Read more: China takes a leap of faith in the Middle East

To be fair, Bahrain’s minority Sunni Muslim government, while brutally cracking down on Shiites, who constitute a majority of the population and have been demanding equal rights and an end to discrimination, has long had a record of religious tolerance towards non-Muslims.

The country has Jewish representatives in parliament and at one point had an ambassador to the United States who was both female and Jewish. Nancy Khedouri, a Jewish MP, attended a recent gathering of the World Jewish Congress where she publicly met Israeli Transportation and Intelligence Minister Yisrael Katz.

The Islamist faction that controls Gaza, said last week it was willing to negotiate with Palestinian President Mahmoud Abbas about the joint rule of the strip and move towards long-overdue elections

Gulf states hope that they can benefit from the Jewish community’s influence in the United States. Their approaches come, however, at a time that the community is split in its attitude towards Mr. Trump.

Jewish religious leaders this year backed away from organizing a conference call with the president to mark the Jewish high holidays in protest against Mr. Trump’s refusal to identify neo-Nazi’s as responsible for the killing of a woman in Charlottesville during a white supremacist march in which anti-Semitic slogans were raised.

Read more: Terrorism as pretext for intervention in the energy-rich Middle East

Mr. Heir told the ceremony that he and Rabbi Abraham Cooper, the center’s associate dean, had been authorized to make public a series of statements made to them by King Hamad during a meeting in February. In those statements, the king denounced the long-standing Arab boycott of Israel and announced his intention to build by the end of this year a museum of tolerance of his own.

Bahraini officials reportedly recently discussed with Israel the institutionalization of mutual visits, allowing Bahraini nationals to freely travel to Israel, and opportunities for trade between their two countries. Gulf states legally ban their citizens from visiting the Jewish state.

Saudi and UAE troops helped the Bahrain government crush the 2011 popular revolt. Bahrain has since hued close to Saudi policy and would not have made its gestures towards Israel without Saudi approval.

Read more: Another setback for US in the neo Middle East

Saudi Arabia and the UAE are also in the firing line because of the brutal conduct of their 2.5-year-old ill-fated invasion of Yemen as well as iron-fisted domestic abuse of human rights.

Weeks before Bahrain’s public moves, Israeli media reported that a member of a Gulf ruling family, believed to be a Saudi prince, had secretly visited Israel in a bid to kick-start Israeli-Palestinian peace talks.

Hamas, the Islamist faction that controls Gaza, said last week it was willing to negotiate with Palestinian President Mahmoud Abbas about the joint rule of the strip and move towards long-overdue elections. Debilitating rifts among the Palestinians have complicated failed peace talks.

Hamas’ willingness to bury its hatchet with ailing Mr. Abbas’s Fatah movement came as a result of a pincer movement in which the Palestinian leader sought to strangle Gaza economically while the UAE worked to engineer the return to Palestine of its protégé, Mohammed Dahlan, a controversial Abu Dhabi-based former security chief with presidential ambitions.

Gulf states are making long-standing covert ties to the Jewish state overt without establishing formal diplomatic relations. In the process, the Palestinians are being pressured to fall into line

The UAE effort, coupled with Gulf gestures towards Israel, stroke with the Trump administration’s efforts to create an environment conducive to Israeli-Palestinian peace by first strengthening informal ties between the Jewish state and key Arab nations. The administration has been pushing for more open relations on issues like trade as well as more open contact built on a common front against Iran and militant Islam.

The UAE in effect initiated the process when in 2015 it allowed Israel to open its first diplomatic mission in the Gulf.

Gulf states have offered to establish relations with Israel if it were to accept a 1982 Arab-endorsed Saudi plan for Israeli-Palestinian peace that called for an Israeli withdrawal from territory occupied during the 1967 Middle East war and the establishment of a Palestinian state alongside Israel. As a result, Israel’s mission is accredited to the International Renewable Energy Agency (IRENA) in Abu Dhabi rather than the UAE government but serves as an unofficial embassy to the Gulf.

The center released at the event a Bahrain Declaration on Religious Tolerance authored by King Hamad, the first of its kind by an Arab head of state. Prince Nasser and Mr. Hier signed the declaration at the ceremon

The ink on Bahrain’s declaration of religious freedom had barely dried by the time that the gestures towards Israel became mired in the 3.5-month-old Gulf crisis that pits Bahrain, Saudi Arabia, and the UAE. Jewish leaders targeted by the three countries condemned efforts by Qatar Emir Sheikh Tamim bin Hamad Al Thani to meet with the Jewish community during his visit to New York to attend the United Nations General Assembly. Sheikh Tamim hired a Jewish PR firm to organize meetings.

Read more: Realignments in the Middle East: Which is the stronger bloc?

Reflecting the divisions among American Jewry, Rabbi Shmuley Boteach organized a full-page ad in The New York Times to denounce Jews willing to meet with the Qatari leader. “It is a shameful episode for our community when those who fund the murder of Jews in Israel are being embraced by Jews in the United States,” the ad said, referring to Qatari relations with Hamas that have been endorsed by the United States.

In space, the US sees a rival in China