Guns and milk: what they carried from the ‘caliphate’ 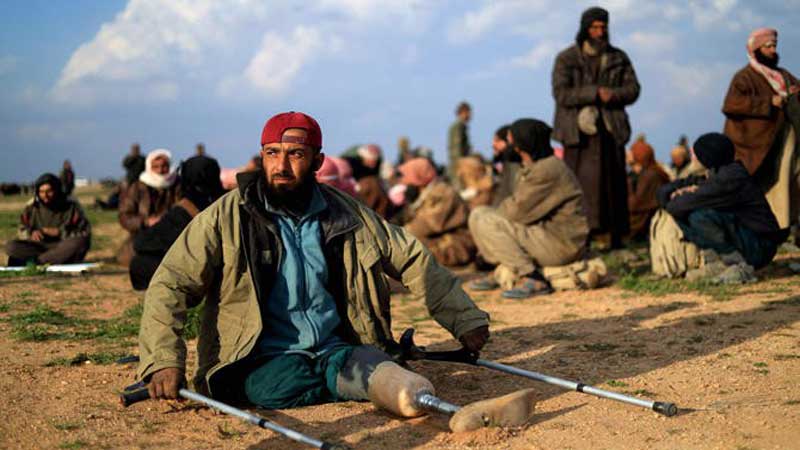 Guns, laptops, gold coins and baby formula: when Syrian fighters search women emerging from the ruins of the jihadist “caliphate”, what they find is not the contents of your average handbag. Women arrive in droves at a screening point controlled by the US-backed Syrian Democratic Forces, 20 kilometres (12 miles) north of the Islamic State group’s last redoubt in the village of Baghouz near the Iraqi border.

Veiled from head to toe, they conceal weapons under their clothes or in their bags, tucked between their children’s scant belongings, says Nawal Kobani, an 18-year-old SDF fighter. “The men don’t carry anything, these things we only find with the women,” the blonde, green-eyed fighter tells AFP at the SDF outpost.

The SDF say they are seeking to clear civilians from the IS pocket before a final push to crush jihadists now trapped in less than half a square kilometre in Baghouz.

On Monday, the SDF evacuated over 46 truckloads of people from the last scrap of the jihadist proto-state, adding to the 5,000 men, women and children evacuated last week. The SDF say they are seeking to clear civilians from the IS pocket before a final push to crush jihadists now trapped in less than half a square kilometre in Baghouz.

Read more: In Syria, families flee IS holdout to dust and desperation

No Pictures or Memories

The latest batch of evacuees arrive at the SDF screening point at sunset on Monday, dust covering their clothes from the rough journey out of Baghouz. Clad in black in the fading light, a group of women huddle in a circle on the rocky, arid ground, waiting to receive food handouts from the SDF.

Carrying a bag in his hand, a young child trudges through the crowded screening point, searching for his mother, Wardah. Behind him, one woman tends to her child, another takes out a bottle of milk for her newborn, and a third sits still in silence, as though in shock.

Abeer Mohammad, a 35-year-old Syrian evacuee originally from the northern province of Aleppo, opens her tiny bag and pulls out a dirty plastic box containing pinches of powdered milk. “I didn’t bring anything with me except some clothes and some milk for the young one,” she says, her three children sitting beside her.

The latest batch of evacuees arrive at the SDF screening point at sunset on Monday, dust covering their clothes from the rough journey out of Baghouz.

“We didn’t have anything left anyway,” she says, her eyes covered by a full face veil. The women’s black veils make it hard to differentiate between them. Another Syrian woman from Aleppo, who asked not to be named, said: “No pictures or memories or anything. We didn’t bring anything but clothes”.

Around 50,000 people — mostly women and children — have streamed out of the Baghouz pocket since early December, according to the Britain-based Syrian Observatory for Human Rights. The early groups carried large suitcases and blankets with them as they left the IS redoubt. Some women stacked gold bracelets on their arms.

But the latest arrivals came out carrying nothing more than small backpacks. Umm Mohammad, a 45 year-old Syrian from Aleppo, sits beside a pair of crutches. She was wounded six months ago when a shell crashed into her home in Al-Shaafa, one of the last jihadist bastions taken by the SDF.

“Today, we carried the clothes that we could gather and we brought them with us here,” she said. The men nearby don’t speak. Unlike the women, who launch a barrage of questions as soon as they get a hold of an SDF fighter, or yell out for food and water, the men stand silently in queues or sit quietly on the ground.

The early groups carried large suitcases and blankets with them as they left the IS redoubt. Some women stacked gold bracelets on their arms.

They don’t chat among themselves or ask questions. “It is impossible for the men to ask for anything,” says Mazloum, a 29 year-old SDF fighter. “They have already surrendered.” Khawlah Hama, a 53 year-old Iraqi woman, walks past a group of women sitting on the ground.

She twists left and right, looking for her 14 year-old son, hoping to find him among a group of men. “He gets very scared, he is only 14,” she says. When asked what she left behind in Baghouz, she says: “Many are still inside”. “There are many fighters, and everyone is ready to leave.”