Gwadar has potential to become a global city: Asim Bajwa

According to media reports the Special Assistant said in a tweet that development activity in Gwadar under CPEC projects is picking up and Gwadar port will emerge as vibrant port due to its unique coast line. 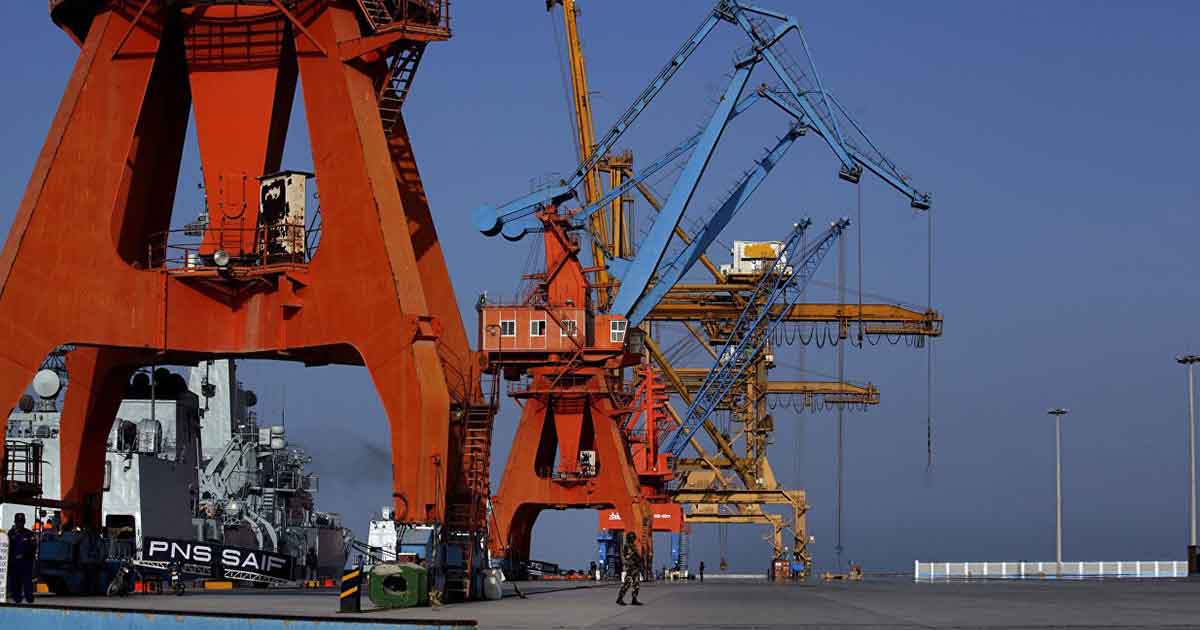 Special Assistant to the Prime Minister on Information and Broadcasting and Chairman China-Pakistan Economic Corridor (CPEC) Authority, Asim Saleem Bajwa has said that Gwadar has the potential to become a global city.

According to media reports the Special Assistant said in a tweet that development activity in Gwadar under CPEC projects is picking up and Gwadar port will emerge as vibrant port due to its unique coast line.

#Gwadar Port and the coast line. See the potential for Gwadar to become a global city and a vibrant port.Development activity picking up #CPEC #pakistanmakingprogress pic.twitter.com/nlJuhZywOO

2019 was the biggest year by far in the development of Gwadar. This strategic deep sea port is reaping the benefits of the Balochistan Government’s master plan while many projects under CPEC are coming to fruition.

Construction has begun on the city’s new international airport and at Gwadar Expo 2019 in March, Prime Minister Imran Khan announced a whole host of new initiatives.

According to Forbes, a world class city is one free from traffic, noise, crime and overpopulation. Rather, green areas, peaceful streets, spectacular architecture, good transport links and a safe environment are among the necessary criteria that characterize such a city.

What projects are underway in Gwadar?

The projects currently under development are crucial to the requirements of any city that aims to compete on the global economic stage. Construction has already begun on the city’s airport while Prime Minister Imran Khan has also recently announced the development of additional transport connections by train and ferry. That would certainly match the criteria of a city with an effective mass transit system. Afghan transit trade via Gwadar has also started.

Transit trade to Afghanistan through Pakistan‘s strategic Gwadar seaport began on Sunday with a consignment of bulk cargo from the United Arab Emirates (UAE).

Another milestone achieved towards making #Pakistan a transit country. The first transit consignment of bulk cargo via #Gwadar to Afghanistan started & several consignments are in line for coming days.#InvestinBalochistan@jam_kamal @farmaanzarkoon @LiaquatShahwani @ZahoorBuledi pic.twitter.com/5kl5vXuh7U

Is there a time frame for Gwadar’s completion?

With its 600-kilometer coastline, Gwadar is a key deep seaport currently operated by state-run by the Chinese firm – China Overseas Port Holding Company (COPHC), which seeks to gain direct access to the Indian Ocean via Gwadar in line with its $64 billion Pakistan-China Economic Corridor (CPEC) mega project.

Federal Minister for Maritime Affairs Ali Haider Zaidi announced in October, 2019 that the government has granted tax exemption to the China Overseas Ports Holding Company (COPHC) for 23 years to facilitate establishment of its industrial units at Gwadar Port.

Back in 2017, Pakistan’s ambassador to China, Masoud Khalid stated that Gwadar would be fully operational city within ‘three to four years’. Based on this timeframe, the port would have achieved all its aims by 2021 and while it’s on the road to those goals, it may still be too early in terms of ‘World Class City’ status.

We also know that Gwadar’s international airport was scheduled to open in 2022. Of the many projects currently underway in the city this is, arguably, the most pivotal and once complete, Gwadar can start to look forward to competing on the global stage.

Trade, tourism and an increase in the city’s population is likely to follow from this point and perhaps, we could tentatively look to the opening of the airport as the point when Gwadar’s World Class would be near completion.

History of Gwadar and its potential to become a city

In a country with a relatively short coastline, Gwadar was always going to be an important site for Pakistan after its acquisition from Omani rule. In terms of its location it is the largest coastal city in the south west of the country, in close proximity to the Iranian border. Apart from the obvious location of Karachi the government also makes extensive use of Port Muhammad bin Qasim but the addition of Gwadar represents a vital step for the nation’s economy in terms of sea trade.

In the 1950s, Pakistan commissioned a United States Geological Survey of Gwadar. The USGS duly reported that this was a suitable site for a seaport and Pakistan then entered protracted negotiations to purchase the city from Oman.

The Gwadar property market was essentially open from this point onwards, but initial development was predictably slow. A small wharf was opened in the port in 1992 with plans for construction of a deep-sea port unveiled a year later but a lack of funds hampered the project at the time. All that was to change when China recognised Gwadar’s potential and began to put its own financial weight behind the project.

It is close to key oil shipping lanes such as the Strait of Hormuz and is the closest warm water seaport to the landlocked Central Asian Republics. As a port and growing city on the Arabian Sea, Gwadar is therefore of interest to many countries in the vicinity, but it is the involvement of China that has really driven investors into this area of Pakistan.

The power of the two nations combined and the money being ploughed into the region therefore makes Gwadar city a region that is progressing rapidly.

Making a success story out of CPEC: Certain, probable, or doubtful?