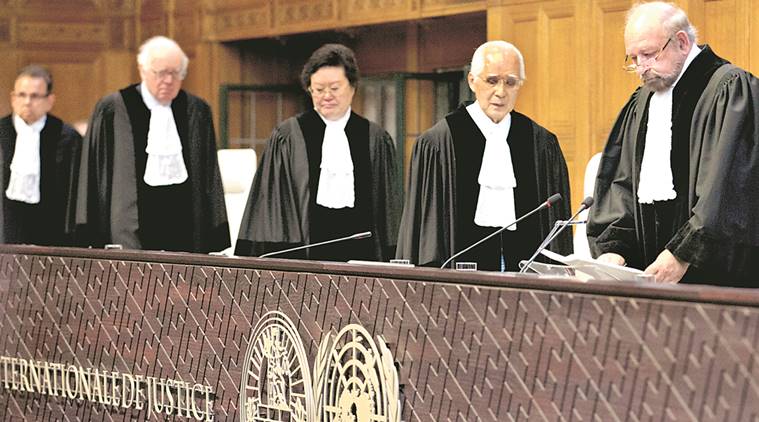 This was a good week for Pakistan. First, Modi made the faux pas of the decade by boycotting the China Summit on the “One Belt One Road (OBOR) initiatives, then India gave us an enormous platform for internationalizing human rights by going to the ICJ over the Kulbushan Jadhav matter.

Reacting angrily to the death verdict by a military court, some BJP politicians demanded that the Baloch form a government-in-exile and the Indian govt declare Balochistan ‘an independent state’.

Arrested by security forces while entering Balochistan from Iran last year on March 23, Lt Comd Jadhav, a serving officer of the Indian Navy, admitted in a confessional video that he is an operative of the Indian intelligence agency Research and Analysis Wing (RAW) and that his passport, under the pseudonym “Hossein Mubarak Patel”, was fabricated for “intelligence gathering”. Admitting Jadhav was a citizen, the Indian Foreign Office claimed he had taken “early retirement from the Indian Navy” but was unable to explain away his passport. Before she and her children were whisked away by Indian intelligence agencies, Jadhav’s wife confirmed he was due to retire in 2022. His phone calls in Marathi to his family did not go with his assumed identity.

Jadhav and the undeniable tale of espionage

Spies and saboteurs are routinely dealt with a Field General Court Martial (FGCM) under the Pakistan Army Act (PAA), under the Manual of Pakistan Military Law (MPML). Jadhav has the right of appeal to Pakistan’s Supreme Court within 60 days. Every country in the world, including India, has similar statutes and provisions in the law. Reacting angrily to the death verdict by a military court, some BJP politicians demanded that the Baloch form a government-in-exile and the Indian govt declare Balochistan ‘an independent state’. Could there be a more blatant example of interference in the internal affairs of another country or inciting its breakup?

The ICJ Jadhav case provides an excellent opportunity for Pakistan to disseminate to a world audience credible evidence about India’s state-sponsored terrorism destabilizing its neighbors.

While ICJ did not allow Jadhav’s confessional video before a Magistrate that he was tasked by RAW to plan, coordinate, and organize espionage and sabotage activities to destabilize Pakistan to be played, it is available on the internet. Recruited after the Indian Parliament attack, he ‘contributed his services’ towards information and intelligence gathering within India before RAW tasked him with establishing a small business in Chahbahar in Iran for running a clandestine terror network targeting Pakistan. Answering to Anil Kumar Gupta, the Joint Secretary of RAW, he conducted operations in Balochistan and Karachi training and launching Baloch insurgents to kill or maim Pakistani citizens. Crossing into Pakistan from the Saravan border in Iran on March 3, 2016, during one of his missions, he was apprehended. Jadhav is living proof of India using terror as a strategy through its “state actors”. Remember the Tamil Tigers and Prabhakaran in Sri Lanka?

Read more: “Pakistan should take measures to ensure that Jadhav is not executed”, ICJ

Accusing Pakistan of violating the Vienna Convention, India petitioned ICJ “to take steps to annul the decision of the military court”. Receiving limited international exposure, till now, the ICJ Jadhav case provides an excellent opportunity for Pakistan to disseminate to a world audience credible evidence about India’s state-sponsored terrorism destabilizing its neighbors. This challenge on the basis of the violation of human rights also opens a door of opportunity highlighting the widespread Indian brutalities in Kashmir.

What happened at The Hague…

The ICJ’s public hearing on May 15 at “The Hague” first heard India’s observations and thereafter Pakistan’s. Former Solicitor General Harish Salve acted as India’s Counsel while QC Khawar Qureshi represented Pakistan. Pakistan not granting consular access to Jadhav despite many requests was termed by Salve as a violation of the “Vienna Convention on Consular Relations”. He said the trial was conducted without informing Jadhav and legal formalities were not followed, claiming Jadhav’s confession was forcibly extracted and that he was kidnapped from Iran, not arrested in Balochistan. Voicing fears that “Jadhav will be executed before this trial ends”, he requested the court to stay the carrying out of the death sentence.

If India had accepted Jadhav as its national why had they not provided his birth certificate, Indian passport, etc?

Queen’s Counsel (QC) Khawar Qureshi said in Pakistan’s response that Jadhav was not eligible for consular access and India had approached the ICJ in haste. Labeling India’s petition as “time-wasting tactics” he called upon the ICJ to dismiss the petition. Khawar asked if India had accepted Jadhav as its national why had they not provided his birth certificate, Indian passport, etc? India did not provide any evidence to prove Jadhav’s innocence or that he is not an Indian spy. Responding to India’s contention that Jadhav’s trial was in gross violation of the Vienna Convention, Khawar noted that its provisions are not intended to apply to a ‘spy’ involved in terror and espionage activities. Consular access between India and Pakistan is decided solely on the basis of the 2008 bilateral agreement which stipulates such access will be subject to discretion if arrested is made on political and security grounds, such as in Jadhav’s case.

Khawar requested the court to cancel India’s application on three grounds viz there is no urgency, the relief sought by India is manifestly unavailable and the jurisdiction is limited. He pointed out the precedents where ICJ decisions were not followed, Paraguay vs the USA, Germany vs the USA, and Mexico vs the USA ignored the ICJ verdicts and domestic laws prevailed. Khawar cited the 1999 aerial incident in June 2000 where (based on arguments by India), the ICJ ruled it lacked jurisdiction to adjudicate the dispute brought by Pakistan against India in September 1999 relating to India’s shooting down of an unarmed Pakistan Navy aircraft in Aug 1999. Khawar said it was wholly inappropriate to invoke the jurisdiction of this court for purpose of political grandstanding.

India’s challenge by going to the ICJ inadvertently gives us a unique opportunity of not only internationalizing the Jadhav affair but more importantly open the door for exposing the murderous violation of human rights in Kashmir.

On May 10 the Indian media reported the “stay order” by which the ICJ had “restrained Pakistan from Jadhav’s execution”, this proved to be false. Finance Minister Sushma Swaraj even tweeted that she “has told the spy’s mother about the court stay order”. The ICJ may or may not agree to India’s request for provisional measures but even if it does it would keep its perfidy in the international spotlight.

The Federal Information Ministry’s job is primarily to promote the image of the State and its critical installations, secondly to promote the image of the government that it serves. Pervez Rasheed’s primary interest was in attacking the Army and Imran Khan, in that order. Leaving the Army alone, Mariam Aurangzeb mostly goes after Imran Khan. She should stick to her primary aim of projecting Pakistan and protecting its institutions, leaving attacking Imran Khan to Danyal Aziz since this well suited and booted gentleman seems to have nothing else better to do in life. India’s challenge by going to the ICJ inadvertently gives us a unique opportunity of not only internationalizing the Jadhav affair but more importantly open the door for exposing the murderous violation of human rights in Kashmir.

Previous articlePakistan and Uzbekistan: The silver jubilee of a good relation
Next articlePak-China cooperation strong at OBOR summit: What is India missing?

29 July 2021
Previous articlePakistan and Uzbekistan: The silver jubilee of a good relation
Next articlePak-China cooperation strong at OBOR summit: What is India missing?

Democracy in Pakistan: Preferring the Electable over the Deliverable?