Hajj 2020: Is Saudi Arabia considering limiting the number of pilgrimages?

According to reliable sources, Saudi Arabia is considering limiting the number of pilgrimages for this year amid the spread of COVID-19. Will any Pakistani be able to perform Hajj in 2020? 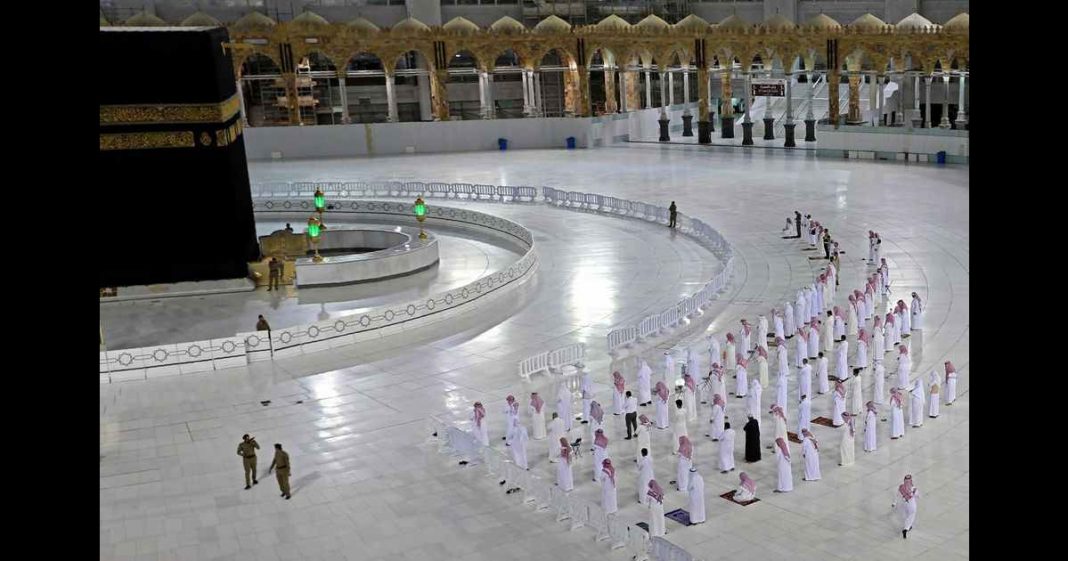 Two sources familiar with the matter said authorities are now considering allowing “only symbolic numbers” this year, with restrictions including a ban on older pilgrims and additional health checks.

Recently, Federal Religious Affairs Minister Noorul Haq Qadri has said that Pakistan is in contact with Saudi authorities regarding quota for this year’s Hajj. As of now, there is no clarity whether Saudi Arabia shall suspend Hajj for this year due to COVID-19 or not.

Importance of Hajj in Islam: Is Saudi Arabia considering limiting the number of pilgrimages?

In Islamic terminology, Hajj is a pilgrimage made to the Kaaba, the “House of Allah”, in the sacred city of Mecca in Saudi Arabia. Muslims from all over the world go to Saudi Arabia to perform this religious obligation. The rites of Hajj are performed over five or six days, beginning on the eighth and ending on the thirteenth day of Dhu al-Hijjah, the last month of the Islamic calendar.

The hajj is one of the five pillars of Islam, along with the confession of monotheism, prayers five times a day, annual charity and fasting in the month of Ramadan, which commenced on Friday. Every conscientious Muslim who can afford to perform the pilgrimage safely and endure it physically is required to undertake it at least once in a lifetime. Pilgrims often save and prepare for years before traveling to Mecca.

Every year, more than two million perform the pilgrimage, gathering for a set of rituals in Mecca, traveling together to several sites in the outskirts of the city and then visiting the holy city of Medina, 300 miles away, where the Prophet Muhammad (P.H.B) is buried.

Notably, the Indonesian Religious Affairs Ministry has decided to outright cancel the hajj 2020 due to the COVID-19 crisis that is still affecting Saudi Arabia.

Read More: Is Saudi Arabia going to suspend Hajj due to COVID-19?

Religious Affairs Minister Fachrul Razi on Tuesday asserts that the global scale pandemic has affected the social aspects of religious worship, which is why the ministry had formed a Hajj 2020 crisis center early on.  “The team has conducted a special study on three schemes regarding the Hajj 2020,” said Fachrul in today’s press conference.

Can Hajj be suspended?

As the deadly pandemic is spreading across the world, prominent religious scholars and commentators propose the Kingdom of Saudi Arabia to suspend Hajj for this year. But the question is Saudi Arabia considering limiting the number of pilgrimages?

Dr. Ebrahim Moosa, a professor of Islamic thought and Muslim societies in the Keough School of Global Affairs at the University of Notre Dame, recently wrote an interesting and insightful piece to urge the Saudi administration to realize its leadership role and guide the Muslim world. “Saudi Arabia needs to immediately announce the suspension of the pilgrimage because of the coronavirus pandemic. Such a declaration will emphasize the priority of safety in Islamic ethics to believers everywhere and will help in curbing religious gatherings during the pandemic,” Dr. Moosa noted.

However, Dr. Moosa maintains that “suspending the hajj is a sensitive question and requires a scholarly consensus of Muslim religious and political leaders”.  He notes that “already, the images of the holy mosques of Mecca and Medina being emptied of believers have caused deep anguish among devout Muslims”. Therefore, he opines “Saudi Arabia has been reluctant to suspend the pilgrimage, fearing a backlash”.

Dr. Moosa argued that the Hajj should be suspended for the public while giving reference from the holy Quran. He says that “the Quran is explicit: “And do not with your own hands invest in destruction.” Prophet Muhammad taught that one should avoid contaminating others during epidemics”.

Moreover, Dr. Moosa believes that since “the hajj was adopted in Islam, historians say, it has been suspended some 40 times. Plague in the Ottoman Empire resulted in the hajj of 1814 being severely disrupted due to the absence of the pilgrims”.

Ibn Rushd the Elder (the grandfather of the famous philosopher, physician and jurist Averroes) argued that a Muslim risking a dangerous journey incurred a sin, a stern warning to anyone who ignores the dangers posed by the current pandemic.

King Salman bin Abdulaziz, who holds the title “Custodian of the Two Holy Sanctuaries,” would advance a global public good by notifying the Muslim world of the hajj’s suspension, concluded Dr. Moosa.

Pakistan’s Foreign Policy at Crossroad: Imran Khan shows support for Turkey during its row with U.S.