Has anyone benefited from American interventionism? 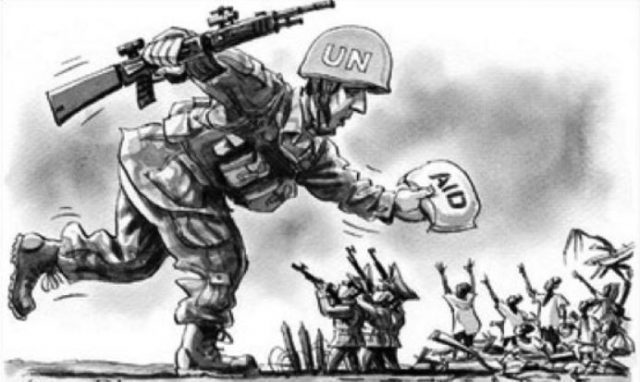 For the first hundred years of American history, the United States was founded on the concept of a limited-government republic, one whose government did not intervene in the affairs of other nations, specifically in Europe and Asia. America’s non-interventionist philosophy was summed up by John Quincy Adams’ Fourth of July address to Congress in 1821, the title of which is “In Search of Monsters to Destroy.”

Later generations of Americans abandoned that founding foreign-policy principle and adopted the opposite philosophy — interventionism. The big turn came in 1898 with the Spanish American War, continued with World War I and World War II, followed by the Korean War and Vietnam War, culminating in today’s forever wars in the Middle East and Afghanistan, with coups, invasions, assassinations, kidnappings, and partnerships with and support of foreign dictators thrown into the mix.

The U.S. government turned on Saddam in the Gulf War, massacring thousands of Iraqis, destroying their water and sewage treatment plants, and imposing an brutal embargo that intentionally killed hundreds of thousands of Iraqi children.

Americans today have a choice: Restore America’s founding principle of non-interventionism or continue embracing foreign interventionism. The good news is that according to an excellent op-ed in the Los Angeles Times by Texas A&M professor Elizabeth Cobbs, a Pew organization poll conducted in 2016 found that 57% of Americans said that the United States should  “‘mind its own business’ and allow other countries to get along on their own.” That was up from 52% in 2013.

That means that we might well be very close to a critical mass that brings one of those gigantic societal shifts that have periodically occurred in history in the direction of freedom.

The Spanish American War. In 1898, the U.S. government used fraud, power, and deceit to acquire a perpetual lease of Cuban property, namely Guantanamo Bay. That, of course, is where the Pentagon and the CIA have established their modern-day torture and indefinite detention prison and kangaroo judicial system, both of which have brought so much anti-American animosity around the world.

It also resulted in U.S. soldiers torturing (i.e., waterboarding), killing, and injuring tens of thousands of Filipinos who were simply fighting for their independence against Spain and the United States. The U.S. conquest of the Philippines is why the U.S. troops, 40 years later, were able to be taken captive when Japan initiated an attack on the United States in World War II.

The good news is that according to an excellent op-ed in the Los Angeles Times by Texas A&M professor Elizabeth Cobbs, a Pew organization poll conducted in 2016 found that 57% of Americans said that the United States should  “‘mind its own business’ and allow other countries to get along on their own.” That was up from 52% in 2013.

World War I. A total waste of tens of thousands of American lives. Its goal of being the war to end all wars and making the world safe for democracy were not achieved, to say the least. In fact, it was U.S. interventionism in WWI that was a major factor that gave rise to Hitler and World War II. World War II. At the end of the war, Eastern Europe had been liberated from Nazi control but ended up under Soviet communist control for the next 45 years. So did East Germany. German and Eastern European Jews were mostly all dead by the time the war ended. The Cold War was launched against America’s WWII partner and ally, the Soviet Union.

The U.S. government was converted into a national-security state. Operating through the CIA, the U.S. government hired Nazis to secretly come and work for the U.S. government. The CIA initiated Operation MKULTRA, which resembled Nazi experiments on human beings. The CIA , the military, the NSA, and the FBI conducted surveillance operations against the American people, and the CIA infiltrated the U.S. mainstream press with its Operation Mockingbird.

Korean War. U.S. interventionism in an undeclared, unconstitutional war left U.S. troops continuing to occupy South Korea into perpetuity, with the ultimate aim of defeating North Korea, which would enable U.S. bases and missiles to be established on China’s border. Today, the world is closer than it has been in decades to the outbreak of nuclear war.

Vietnam War. It tore the United States apart. Almost 60,000 American men died for nothing. Vietnam was united under communist rule, and the United States didn’t end up falling to the international communist conspiracy, as U.S. officials said it would.

Iran. In 1953, the CIA secretly orchestrated a coup that destroyed Iran’s experiment with democracy and installed, trained, and supported one of the most brutal tyrannies in the world. That is the root of America’s crisis with Iran today.

Guatemala. In 1954, the CIA secretly orchestrated a coup that destroyed Guatemala’s democratic system and installed a brutal, unelected, pro-U.S. military regime. The coup brought about a 3-decade long civil war that killed and injured more than a million people.

Chile. In 1970-1973, the CIA secretly orchestrated a coup that destroyed Chile’s democratic system and installed a brutal, unelected, pro-U.S. military regime, whose forces proceeded to round up, kidnap, incarcerate, torture, rape, or execute tens of thousands of innocent people. U.S. officials conspired to violently kidnap the commanding general of Chile’s armed forces, which resulted in his murder, and also conspired in the murder of two innocent Americans, Charles Horman and Frank Teruggi.

No U.S. official was ever held accountable for any of this. The director of the CIA, Richard Helms, was later convicted of falsely denying to Congress under oath the CIA’s role in bringing about the coup. After sentencing, Helms was treated as a hero by the CIA.

Cuba. 1959-to date. Invasion. Assassination attempts. Sabotage. Terrorism. The Pentagon and the CIA took all of these actions against Cuba, a country that has never attacked the United States or committed any other act of violence against the U.S. The U.S. government has been the aggressor nation the entire time, including with its brutal embargo, whose aim is to inflict maximum economic suffering on the Cuban people in the hope that they will violently oust the communist regime and restore a pro-U.S., pro-Mafia dictatorship, like the U.S.-supported Batista regime that preceded it.

Iraq. In the 1980s, the U.S. government partnered with Saddam Hussein in his war against Iran because the U.S. was upset that the Iranian people had violently ousted the tyrannical regime that the CIA had installed in 1953. Then in 1990, the U.S. government turned on Saddam in the Gulf War, massacring thousands of Iraqis, destroying their water and sewage treatment plants, and imposing an brutal embargo that intentionally killed hundreds of thousands of Iraqi children.

All this and other interventions later brought terrorist blowback in the form of anti-American terrorism, including the 9/11 attacks, which then brought a second invasion of Iraq, which ended up destroying Iraq, torturing, bombing, and killing hundreds of thousands of more Iraqis, and producing ISIS and a perpetual “war on terrorism.

Afghanistan. Using the 9/11 blowback from U.S. foreign policy, the U.S. invaded Afghanistan, killed hundreds of thousands of Afghanis, almost none of whom had anything to do with the 9/11 attacks. Today, there is perpetual war in Afghanistan to support a corrupt tyrannical regime.

Read more: US regime-change operations are a reality!

That’s just some of the interventions. There is also Libya, Syria, Panama, Grenada, Congo, Indonesia, and many more. The consequences were bad in those interventions also.

The fact that 57 percent of the American people are now leaning toward our nation’s founding principle of non-interventionism is an incredibly positive sign. My question is this: How can 43 percent of Americans still support interventionism given its horrific consequences?

Al-Bakistan – My Land of pure, its confusions, its lovely contradictions & its Arithmetic! – By Maleeha...