Has the US created another excuse to strike Syria? 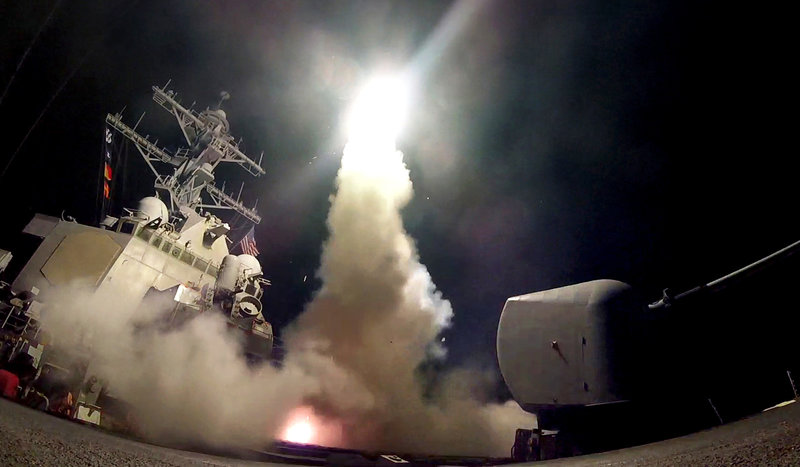 The US state department held a special media briefing on Monday to highlight that Syrian government is carrying out the mass killing of thousands of prisoners and burning the dead bodies in a large crematorium specially constructed in the military prison at Saydnaya located 45 kilometers from Damascus. The briefing was given by Ambassador Stuart Jones who represented the US at the recent Astana talks.

The declassified satellite pictures taken over several years, beginning in 2013, do not definitely prove that the prison building is a crematorium.

Alongside, declassified photographs have been released purportedly depicting a building in the prison complex in Saydnaya that has been adapted to support the crematorium. Jones cited accounts by humanitarian agencies and from US “intelligence community” to back up the allegation.

He used exceptionally harsh language to condemn the Syrian regime, and, importantly Russia and Iran as well – “And these atrocities have been carried out seemingly with the unconditional support from Russia and Iran.”

Read more: US Defense Secretary’s clarification over their Syrian actions

A close reading of the transcript of Jones’ briefing reveals some discrepancies, which are intriguing, to say the least. For a start, the declassified satellite pictures taken over several years, beginning in 2013, do not definitely prove that the prison building is a crematorium. The US is making a surmise — let us say, an intelligent guess. Second, the Q&A session was abruptly terminated when searching questions began to be asked by the media persons. On the whole, one gets the impression that the briefing was conducted more for purposes of record than to initiate an informed discussion.

Third, Jones took the opportunity to express reservations over the recent deal to set up four “de-escalation zones” inside Syria in an attempt to reduce violence and save lives, which was brokered by Russia with support from Iran and Turkey during talks in Astana last week. Why he linked the issue to the crematorium, remains unexplained.

The US could be making one more attempt to get the Russians to dump President Bashar Al-Assad. It won’t work, but there is no harm in trying once again.

Any number of possibilities arise as to why this briefing was organized. One, could it be that the US is retracting from the deal on ‘deconfliction’ zones? Jones’ briefing comes just 5 days before President Donald Trump’s visit to Saudi Arabia (and Israel), one day before the visit to the White House by Turkish President Recep Erdogan, and, of course, on the same day that the Crown Prince of Abu Dhabi Zayed Al Nahyan met Trump at the White House.

Two, at the most obvious level, the US outrage against the Syrian regime was displayed on the same day the Syrian peace talks were resuming in Geneva. The US could be making one more attempt to get the Russians to dump President Bashar Al-Assad. It won’t work, but there is no harm in trying once again.

Besides, given the renewed cacophony in the Washington Beltway over Trump’s dealings with Russia, it is probably expedient for the Administration to distance the US policies in Syria from Russia’s. Again, it could also be that the US is putting pressure on Moscow to rein in the military offensive in the eastern regions of Syria where the Syrian government forces backed by Iranian militia and Hezbollah are reportedly on a collision course with Western special forces.

When doctored intelligence is presented at a diplomatic briefing — and that too, an “on-the-record” briefing — there is ground for suspicion. The fact of the matter is that the Trump administration is fighting an existential battle. As Russian President Vladimir Putin put it yesterday at a press conference in Beijing, we are “at a time when we see growing uncertainty in major political and economic power centres – say, in the United States, where an intense internal political power struggle continues, creating a nervous atmosphere in both politics and the economy…” There is renewed talk of impeachment of Trump; allegations have been made by Trump’s detractors that he shared “highly classified intelligence” on Syria with Russian Foreign Minister Sergey Lavrov at their meeting in the White House on April 11.

The big question is: Are we at another “Idlib chemical attack moment”? Will Trump order another missile strike in Syria? Indeed, Jones’ account is chilling, evoking images of a Nazi concentration camp. Jones claimed that as many as 50 people per day are being hanged at the Saydnaya military prison and that between 5,000 and 11,000 had died between 2011 and 2015 in the prison.

US will withdraw troops from Syria ‘very soon’: Trump