Iraqi paramilitary chief Abu Mahdi al-Muhandis, killed early Friday in a US strike on Baghdad, was seen as Tehran's man in Iraq and a sworn enemy of the United States. 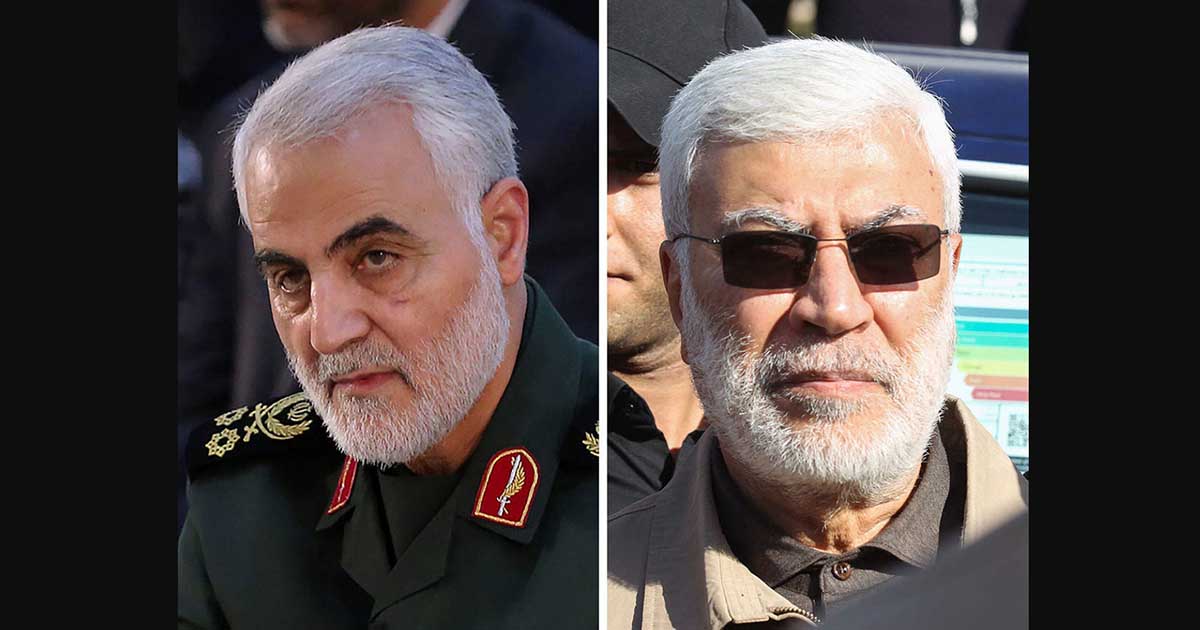 The men both died in a strike on a convoy belonging to Hashed al-Shaabi, an Iraqi paramilitary force with close ties to Iran, whose deputy chief was Muhandis. It came just days after Hashed supporters attacked the American embassy in Baghdad, provoking anger in Washington.

Like the Iranian commander, Muhandis sported a white beard and kept his white hair swept into a neat coiffe. He wore glasses and spoke fluent Persian

Muhandis — the widely-used nom-de-guerre for Jamal Jaafar al-Ibrahimi — was among the pro-Iran mob laying siege to the embassy on Tuesday. Known for his virulent anti-Americanism during the US-led occupation in Iraq, Muhandis also built up close ties to Iran over decades.

“Muhandis was demonstrative of how Iran built its network of proxies in Iraq,” said Phillip Smyth, a US-based researcher focused on Shiite armed groups. “He has history with basically every major network Iran had in Iraq. You would not have found a stronger ideal” of Iran’s influence in the country, he said.

Born in 1953 in Iraq’s southern Basra, Muhandis held both Iraqi and Iranian citizenship. In the 1980s, he was a leading commander in the Badr Corps, a unit of Iraqi fighters founded in Iran in opposition to then-dictator Saddam Hussein.

He was sentenced to death in Kuwait for involvement in the 1983 bomb attacks on US and French embassies there but fled the country.

Assassinations of #Soleimani/#Muhandis are immoral & catastrophic for cause of #Peace. @realDonaldTrump corrupted #American @ForeignPolicy to do bidding of #Israel, but angered #Iraq/#Iran & ensured future conflict and death of innocents. @ghaderi62 we stand w/ #Iranian people!🇮🇷 pic.twitter.com/dwluemaZ5X

Inveterate Opponent of US

After Saddam’s ouster in the US-led invasion in 2003, Muhandis briefly served as a member of parliament in Iraq following the 2005 elections. He then helped found Kataeb Hezbollah — a hardline Iran-backed faction that targeted US troops.

In 2009, the US sanctioned both Muhandis and Kataeb Hezbollah as “terrorist” entities. Washington said he ran “weapons smuggling networks and participated in bombings of Western embassies and attempted assassinations in the region.”

Michael Knights, an expert at the Washington Institute, described Muhandis as “the most inveterate opponent of the United States” among Iraq’s Shiite armed groups. He was later appointed deputy head of the Hashed, founded as a loose network of Shiite-majority factions fighting the Islamic State group in Iraq.

Iraqi paramilitary chief Abu Mahdi al-Muhandis, killed early Friday in a US strike on Baghdad, was seen as Tehran’s man in Iraq and a sworn enemy of the United States

It was later absorbed into Iraq’s formal security forces, but some of its more hardline factions, including Kataeb Hezbollah, still operate independently of Baghdad.

“Muhandis worked assiduously to develop the Hashed into an organization that was neither subject to full prime ministerial command nor subordinate to the conventional security forces,” said Knights.

Although he worked under Faleh al-Fayyadh, also Iraq’s national security adviser, Muhandis was widely recognised as the Hashed’s “real” leader, observers said. He had both the utmost loyalty of its forces on the ground and control over its financial resources.

That made him “the central nervous system” of the IRGC’s Quds Force in Iraq, Knights wrote last year. He was a personal advisor to Soleimani, with the two pictured on multiple occasions in warm embraces.

Like the Iranian commander, Muhandis sported a white beard and kept his white hair swept into a neat coiffe. He wore glasses and spoke fluent Persian.

Despite his high-profile position within the Hashed, Muhandis rarely appeared in public or delved into politics. He broke his usual silence last year to blame the US and Israel for a string of mysterious blasts on Hashed bases.

It remains unclear who could replace him, Smyth said, as it would be challenging to find someone with such a close ideological and personal relationship to Iran.

US schools should teach more about Islam: US presidential candidate Joe Biden