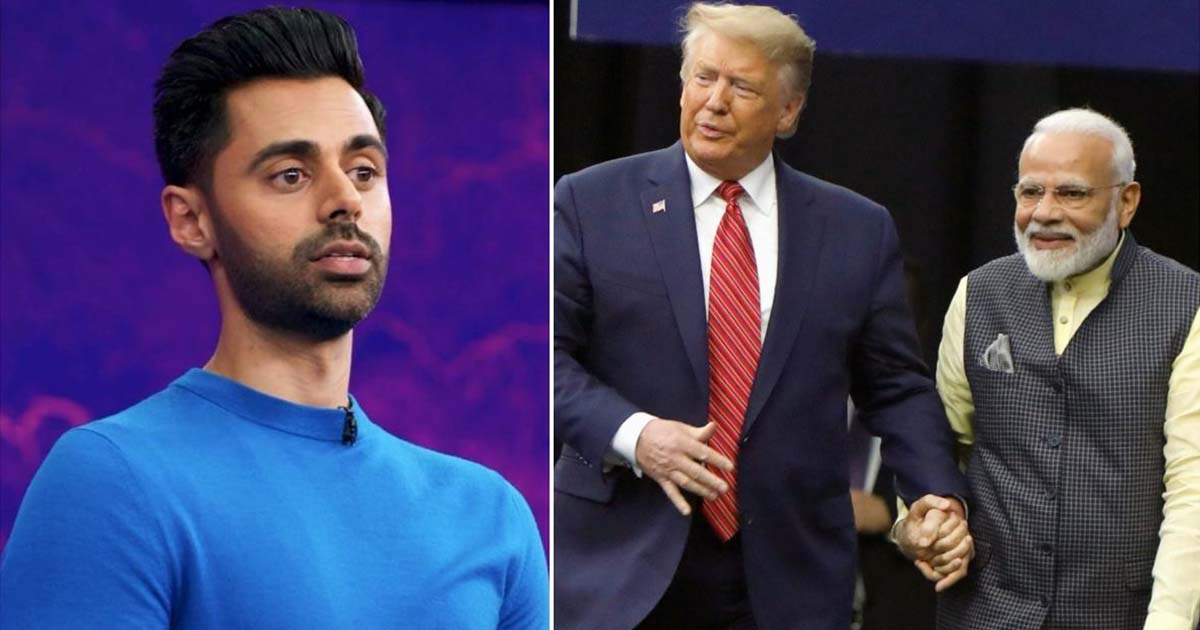 Acclaimed Indian-American comedian Hassan Minhaj opened up about his experience of denied entry at Howdy Modi event held at NRG Stadium Houston, Texas USA last week. The host of Netflix’s Patriotic Act, Minhaj asserted that he was clearly denied entry by the security officials in the stadium, attributing their unwelcoming gesture to his statements against Prime Minister Narendra Modi in his show.

Vented his Anger on the Show

Hassan Minhaj posted a small video clip of his interview at show Late Night with Seth Meyers, discussing the fiasco of being barred from attending the Howdy Modi event. Hassan Minhaj mocked that while authorities kicked him out he was being honored as a successful Indian-American at the event inside the stadium. He captioned the video he shared as ‘Never got a chance to say, Howdy Modi.’

On the show, he said, “Trump went at the rally to open for Modi. It was a big deal. I was like ‘I gotta go’. This is like Jay-Z and Beyonce of ethno-nationalism. Imagine a Jay and Bee concert but with no white or black people and no coolness at all.”

He said, “So we submit our press credentials immediately get an email back through saying ‘We’re out of space’. I was like ‘word’. Like I’ve been to Indian weddings, you just walk in. You’re out of space in a football stadium? Nah.”

Honored but Demeaned at Same Time

Minhaj asserted that he was in the parking lot watching the live stream of the show where he saw him honouring him. Adding that ‘they show a photo of me on the Jumbotron and people start clapping. So they were honoring me for my comedy while also blackmailing me and blackballing me and kicking me out for my comedy.”

Hassan Minhaj in the episode titled Indian elections had taken a dig at Indian Prime Minister Narendra Modi and US President Donald Trump.

Hassan Minhaj also passed a bold assertion on the Kashmir issue in the show. He said, “There were protestors outside the stadium. They were arguing with each other. And the police officers on rally duty were like ‘Why are you arguing over sweaters? Everyone can have cashmere’. They were like ‘That’s the problem, everyone can’t have Kashmir’.”

A video of Hassan Minhaj outside the NRG stadium is making rounds on social media in which he along with his crew was being forced stopped by the security officials to enter the stadium.

In the multiple videos making rounds on social media, Hassan Minhaj can be seen negotiating with the event manager for his entry into the stadium with his staff.

The video begins with Hassan saying on the phone, “We are just trying to get our credentials.” To which, the authority on the phone replies, “Yeah, but I don’t have any credentials to get you.” After which, Hasan can be seen pointing to the credentials set for him on the table saying, “There’s credentials right here.”

To which the person replies, “I know, but I am telling you that outside of one journalist, there’s no one else coming. But there is no other credential that I can give you.”

Hassan Minhaj’s entry into the stadium gave the impression that Muslims journalists were barred entering the Howdy Modi event since journalist Maria Kari also responded to the viral videos asserting that, “Looks like I’m not the only Muslim journalist who was blocked from attending the #HowdyModi event today. Damn.”

Why was Hassan Minhaj Denied Entry?

Hassan Minhaj in the episode titled Indian elections had taken a dig at Indian Prime Minister Narendra Modi and US President Donald Trump. In his crude remarks, he drew similarities between PM Modi and President Trump.

“They both dislike the press, they both use Twitter to attack their rival. They are both strong men with rabid fans and they both greet people in very bizarre ways. Now, you guys all know Trump’s handshake. Trump yanks people like he is expecting coins to come out of their mouths. And, if Trump’s a tugger, Modi is a hugger.

He further reproached PM Modi for never holding a press conference, the only PM of India who never held any press conference calling it tantamount to posting a picture on Instagram but muting the comments.

He also highlighted the rise of economic crisis, intercommunity instability, jingoism and corruption in India under Modi regime.

He said, “Since Modi came into power, India has grown more hostile to minority groups. Among the vocal minority, religious nationalism has been resurgent, specifically Hindu nationalism. He also discussed how BJP is trying to strip almost 4 million Muslim immigrants of their right to vote in Assam. “If they get away with this, it will be the single largest voter disenfranchisement in recorded history,” he added.

At least 13 killed as India-Pakistan tensions flare in Kashmir