The obsession against Muslims and Pakistan sweeps India as there is a growing paranoia against the religious minorities in India. The music continues to harbor abhorrent hateful messages against Muslims in India. 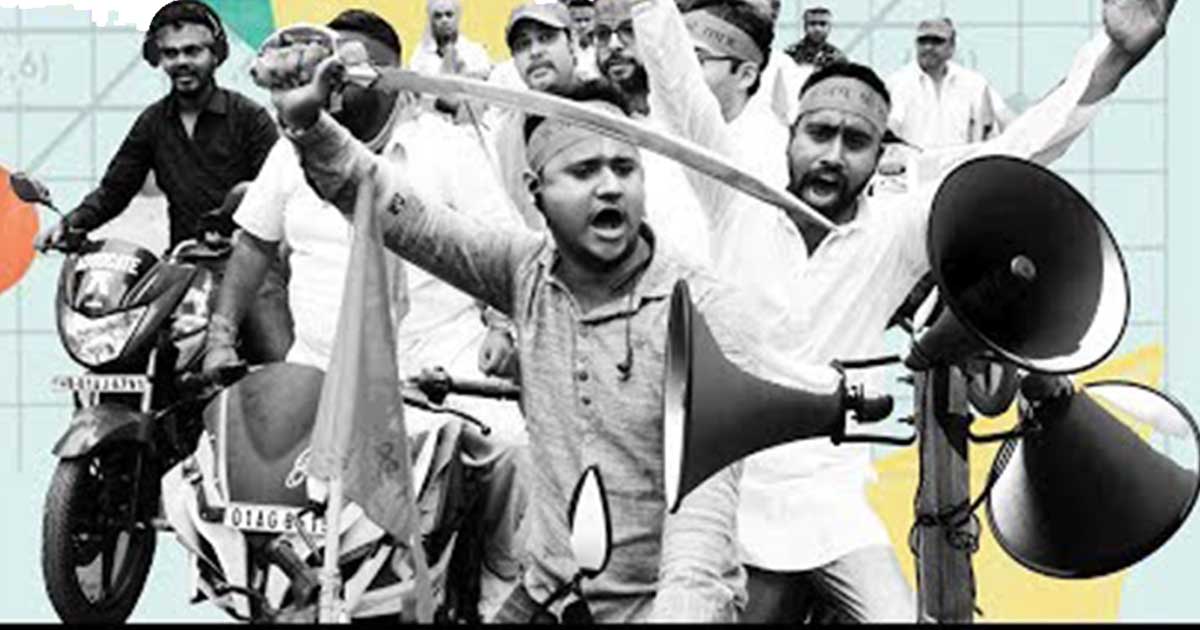 India is witnessing an alarming surge in ‘Bhagwa and Hinduvaadi music‘, Islamophobic songs, over the past few years, with a peculiar rise noticed in the above-mentioned genre of music particularly in the past few months.

The singers belong to rural and middle-income groups projecting the anti-Muslim and anti-Pakistan sentiments in the songs that mostly woo the conservative, ultra-nationalistic Hindutva followers in India. The massive response in terms of likes, shares, and views on YouTube videos of the songs suggest India is increasingly falling for Islamophobic or Hinduvaadi music.

Sometimes it forced you to think about this👇👇👇watch it…..and make sure that you don't influence from their thinking… But music nevr divided anyone in my India but now a days anything can happen….. https://t.co/2MFVRNFVaR

The upbeat song in the local and Hindi languages boasts about the centuries-old history of Hinduism, Hindu Lords, and their supremacy over the vast land. The lyrics of the songs incite hatred in Hindus for the Muslim population in India, which makes up the second-largest religious community in India. The songs blaspheme against Islam and cuss the Holy land of Mecca and Medina. With the singer encouraging the listeners to even attack and demolish the Holy sites of Mecca and Medina.

One of the singers even claimed that the Grand Mosque in Mecca had the Shiv Ling, a statue of Hindu Lord Shiva, hence they have the right to occupy and rule that land. In an interview to an Indian website, the singer claimed that the Muslims are originally Hindu and that they have strayed towards Islam.

Alongside the hate speech, there are hate imageries in the videos of the songs-of swords, sticks, threatening stills of people being lynched, being brutally beaten, the demolition of Babri Masjid.  The songs even threaten to kill the people who do not chant Hindu slogan ‘Jai Shri Ram‘. A song even asked the Muslims of India to emigrate to Pakistan, since in 1947 Pakistan was created as a separate homeland for Muslims.

Now, the research suggests, the songs are classified as ‘hate content‘ and violates several sections of the Indian Penal Code. No cases of hate speech have been slapped against these singers. Criticism followed India’s law enforcement agencies for turning a blind eye to the promoters of hate content in the country.

Section 153 A, which looks at the content that promotes or attempts to promote hatred between religious groups. The punishment for this is up to three years of imprisonment and a fine. If this promotion of enmity is done in a place of worship, then the punishment is up to five years with a fine.

Section 295 A, which deals with insulting the religion or religious beliefs with an intent to outrage tells that punishment for such acts is up to three years of imprisonment and a fine.

Section 505(2), under which statements that create or promote enmity and hatred on grounds of religion are punishable with up to three years in jail and a fine.

Music and entertainment is a useful tool in India to disseminate the message and propagate perceptions and distinct sentiments among people.

The misogynistic songs of marrying a fair Kashmiri bride swarmed the internet soon after the abrogation of Article 370 and 35-A on Kashmir.

Bard of Blood, the latest Indian web series on Netflix, is the latest instance to endorse the argument that the music and entertainment industry in India is heavily deployed to incite hatred for Pakistan and promote bigotry.

The Netflix series produced by Shah Rukh Khan features Emran Hashmi in the lead role and shows Pakistan as a breeding ground and sympathizers for terrorism, while Indian armed forces are brave and courageously fight against terrorists.

No Forgiveness For You: Supreme Court Rejects Acquittal Plea in Acid Attack Case