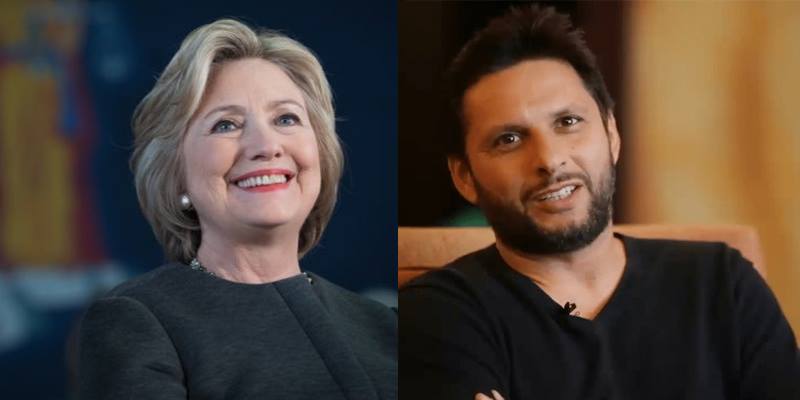 On Tuesday Shahid Afridi addressed Hillary Clinton in a tweet and wrote: “Thank you @HillaryClinton for supporting the cause of #Humanity and your best wishes. “Together we all are #HopeNotOut,” he added.

Hillary Clinton, former First Lady, and wife of Bill Clinton greeted the all-rounder, thanking him and saying, “Thank you for that very nice message that your friend and mine, John, delivered to me at our event today. I wish you the very best!”

With @TanyYao Member of Legislative Assembly (MLA) for #FortMcMurray. Talked about colloboration to promote Pakistan Canadian Relations & cooperation in #SAF sports diplomacy. Thank u to all ppl who came & beautiful children as they are our future.#HopeNotOut @FortMacToday pic.twitter.com/x7Xuglt2qT
— Shahid Afridi (@SAfridiOfficial) April 29, 2018

The Pakistani star cricketer is garnering massive appreciation from the international community as his philanthropic endeavors are echoing in the world. The latest one to appreciate him is Hillary Clinton from the US.

Shahid Afridi will be hosting two charity dinners in the month of Ramzan in the UK, which will be supported by ‘Parwaz Hai Junoon’s’ actor, Hamza Ali Abbasi and the young singer, Hariss J, famous for his songs based on Islamic messages.

Earlier, the Canadian Prime Minister, Justin Trudeau expressed his support and encouraged his people to donate generously to the Shahid Afridi Foundation when Afridi was on his trip to Canada.

Enjoyed the hospitality of Pakistani community in #Calgary which came out in great numbers to support @SAFoundationN.

Shahid Afridi has collected a generous amount from his recent visit to Canada, which, will be donated to build a children’s hospital in Kohat. The cricketer is a soft image that is countering the stern portrayal of Pakistan in the international community.

In regard to this, even the Arabs have recognized his charisma as they are planning to invite Shahid Afridi to participate in the T10 league tournament scheduled to be held in Jeddah in December. The sports board of Saudi Arabia is planning to organize the shortest format of cricket T10 league later this year.  The board stated that they are in talks with the renowned cricketer for the tournament as he is undoubtedly a crowd-puller.

Thank you @JustinTrudeau for supporting the vision of @SAFoundationN & ur hospitality. @Canada is a nation of gr8 ppl.

A special tks to @IRCanada, the Pakistani & Indian community of #Vancouver for ur generous contribution for #KohatHospital as together we all are #HopeNotOut pic.twitter.com/biXmdTKZHk
— Shahid Afridi (@SAfridiOfficial) April 27, 2018

“Afridi is a crowd-puller and we’d like to have such players playing,” Nadwi said. “We are talking to Inzamam and Shahid. It is difficult to get Indian players as they have a defined policy where they only play in the Indian Premier League. It will only be the main players from the sub-continent, but we are (also) expecting players from the UK, West Indies, and South Africa.”

Read more: Justin Trudeau shows his support to Shahid Afridi and it is…

Fans are excited to see Shahid Afridi back in action soon as he left the latest Pakistan Super League matches midway due to his injury.

Pompeo warns Russia: stay out of US ‘domestic matters’