Hindu community decorates a 40-feet flag with 60,000 balloons in the NA 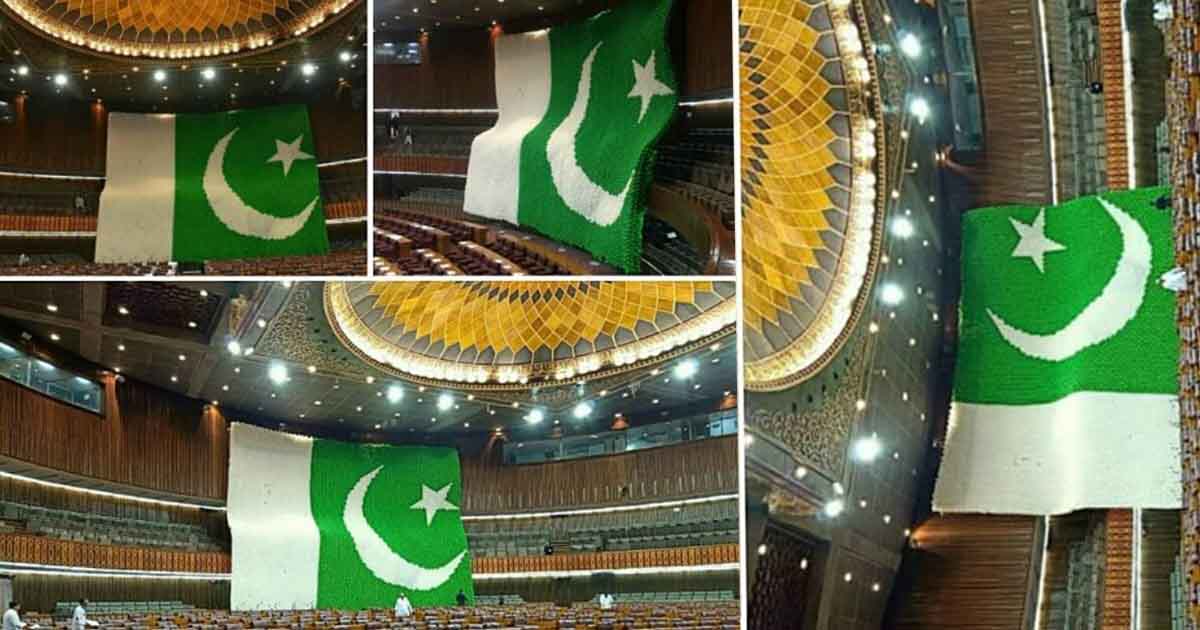 In a unique expression of love, Pakistan’s Hindu community decorated the National Assembly with 60,000 balloons of green and white color. The members of the Hindu community prepared the national flag of Pakistan with balloons, which will be displayed during the joint parliamentary session.

Chairperson of Pakistan Hindu Council and Member of the National Assembly, Dr. Ramesh Kumar Vankwani alongside three dozens of volunteers (including the workers of the assembly secretariat) took part in its preparation. He is optimistic that the Guinness Book of World Records will recognize their efforts. The flag is 40-feet-high and 60-feet-wide. According to sources, it has been installed adjacent to the hall’s main gate, covering the entire area from ceiling to floor.

He added that teams of Guinness Book of World Record will take a tour and decide if it has set a record or not. He hopes that the flag would make it to the book.

The government has opened the doors of the temples for Hindu families in Sialkot, yet, the formal inauguration ceremony was held on the Nag Panchami festival on August 5th.

“We want to give a clear message to the world that we stand united for the defense of our motherland,” he added while commenting on the deteriorating situation of the Indian-occupied Kashmir (IoK).

“The flames of war between the two nuclear powers can engulf the entire world,” the MNA remarked. He remarked, “Hindu community in Pakistan is ready to defend the country at any point.” He added that Pakistan suffered an extreme loss in the war against terrorism.

He asserted that the Hindu community of Pakistan has chosen Pakistan and declared Muhammad Ali Jinnah as their leader.

Moreover, Dr. Kumar urged to keep aside the differences and stand united for the protection of the motherland. He added that students from various universities and colleges have been invited to visit Parliament on Independence Day.

While On The Otherside, Hindu Community Decorates NA With National Flag Made Of 60,000 Balloons…❤️🇵🇰🇵🇰 pic.twitter.com/rcBCOJwBKu— Haider Rajput (@HaiderR39967677) August 5, 2019

While on the otherside, Hindu community decorates NA with national flag made of 60,000 balloons pic.twitter.com/7EFwqyaagD— Fahad Malik (@Fahad4014) August 5, 2019

Protection of Minorities in Pakistan

In a series of measures, Pakistan has restored scores of ancient temples of Buddhism and Hinduism in the country. Recently, Pakistan opened a 1000-year-old temple in Sialkot for Hindu devotees after seven decades. The temple was shut down after a large number of Hindu worshipers fled to India during the 1947 partition.

The government has opened the doors of the temples for Hindu families in Sialkot, yet, the formal inauguration ceremony was held on the Nag Panchami festival on August 5th.

On December 25th, just six months after his election as the premier of Pakistan, PM Khan reiterated his promise to work for the strengthening of the minorities in Pakistan. He tweeted that his government is endeavoring to “ensure that our minorities are treated as equal citizens” as per the vision of the founder of Pakistan, Mohammad Ali Jinnah, assuring that minorities will be safe to practice their religion in Pakistan.

FATF and the politics behind ‘terrorism’