Hindutva- India’s very own doom through self inflicted extremism 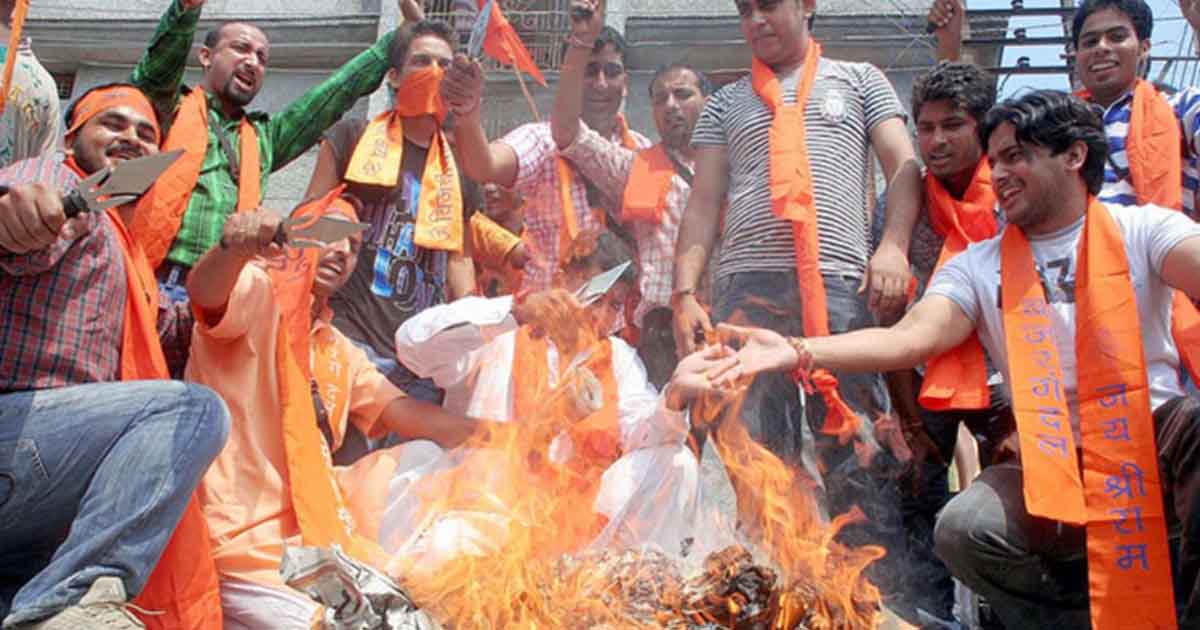 The term “Hindutva” is alternatively used to signify a variety of the concepts such as “Hindu Nationalism”, “Hindu Supremacism” and “Brahmanism” in today’s India. Though “Hindutva” remained prominent in the wake of religious extremism, intolerance and violence against the religious minorities and marginalized communities throughout the Modi-led BJP rule in India, this phenomenon dates back to pre-partitioned India.

In the late 1930s, the Congress Ministries in British India essentially displayed a sort of Hindu chauvinism, which has been a hallmark of Hindutva. Similarly, Mahatma Gandhi, the founding father of India was assassinated by an ultra-nationalist Hindu and RSS member Nathuram Godse for “favoring the political demands of Indian Muslims”.

Bharatiya Janta Party (BJP), which was originally organized as a political wing of RSS, officially adopted the Hindutva ideology in 1989; ever since it has diligently been pursuing radical Hindu nationalist policies in India.

After coming into power in 2014, the Modi-led BJP regime actively tried to implement its agenda of promoting Hindutva in India. Many believe that such BJP’s agenda has backfired as the ruling party has been defeated in five Hindi heartland states in the recently held state elections in India. Though BJP is on the decline in India politically, Hindutva is not necessarily so.

Replacing ‘hardcore Hindutva’ with ‘softcore Hindutva’, Hindu Nationalism has just changed its face in India. The Congress party, India’s main opposition, appears to have subscribed to ‘soft Hindutva’. It essentially shows that Hindutva is currently representing the Realpolitik in India.

Hindutva politics was instrumental in Narendra Modi’s rise from a state chief minister to a national leader and PM of India. Now it is being speculated that the Congress party would also resort to Hindutva politics to expand its Hindu vote-bank in the country. So, Hindutva seems to have become an important part of India’s national political discourse.

In the early 20th century, the European dictators like Mussolini and Hitler conceived and presented the radical nationalist ideologies such as Fascism and Nazism. These totalitarian political ideologies immensely influenced world politics at that juncture. Essentially inspired by these racial and national chauvinist movements in Europe; Hindutva, a Hindu nationalist political ideology was introduced in India in the 1920s.

Under the political umbrella of BJP, all the Hindutva-oriented organizations were quite at liberty to victimize and persecute other communal minorities in the country.

Aimed at establishing Hindu hegemony, this ideology called for promoting the Hindu way of life and its cultural symbols in India. In 1925, Rashtriya Swayamsevak Sangh (RSS), a Hindu nationalist volunteer organization, was founded primarily to champion this ideology in India.

The swastika is an ancient Hindu symbol which was adopted by both the Nazi party and RSS as their organizational emblem. It is also a known fact that senior RSS members had direct links to both Adolf Hitler in Germany and Benito Mussolini in Italy. In fact, having shared hate and antagonism towards the British, both dictators were a sort of natural allies. Therefore, RSS was banned during British rule in India. After the defeat of Nazi Germany and Fascist Italy in World War II, the Hindu nationalists in India distanced themselves from these totalitarian regimes of Europe.

Bharatiya Janta Party (BJP), which was originally organized as a political wing of RSS, officially adopted the Hindutva ideology in 1989; ever since it has diligently been pursuing radical Hindu nationalist policies in India. Within 3 years after formally adhering to Hindutva ideology, BJP, along with other Hindu nationalist parties in India, succeeded in mobilizing the Hindu extremists to demolish the historical Babri Masjid in Ayodhya in 1992.

Read more: India’s Saffron Justice: The Rise of the Hindutva State under BJP…

Though BJP has become a mainstream political force in India, it hasn’t succeeded in rising above its narrow nationalist politics in the country. We have just seen it trying to translate its Hindutva ideology, covertly or overtly, in India during its entire tenure.

There was witnessed a violent wave of Hindu extremism running across India soon after BJP succeed in forming its government in India in 2014. This extremism can easily be attributed to the radical nationalist policies of the ruling BJP. Under the political umbrella of BJP, all the Hindutva-oriented organizations were quite at liberty to victimize and persecute other communal minorities in the country.

The constitution guarantees religious freedom to all communities including the freedom of worship, and the right to establish and maintain the religious institutions and organizations.

So, there have been a large number of deplorable incidents in India: The 2015 Dadri mob lynching; the incident of blackening the face of Indian politician and activist Sudheendra Kulkarni for organizing the launch for former Pakistani former foreign minister Khurshid Mahmud Kasuri in Mumbai; the ink attack on the Kashmiri lawmaker engineer Rashid outside the New Delhi Press Club; the cancellation of Pakistani singer Ghulam Ali’s concert in Mumbai; and the incident of storming the Mumbai office of BCCI by the Shiv Sina activists canceling the scheduled meeting between Pakistan and India’s cricket board officials. All these incidents speak volumes about the rising and unabated Hindu extremism in India.

As a matter of fact, communal disharmony has been a chronic problem in the Indian Sub-content for a long time. The multi-communal, multi-ethnic and multi-lingual character of India has also been a major governing challenge for the rulers in this region. The so-called Two Nation Theory ultimately led the partition of India in 1947. The Bengal nationalism further caused Pakistan to be broken up on an ethnicity basis in 1971. There have also been bloody Muslim-Hindu communal riots at the time of partition killing hundreds of thousands of people on both sides of the Radcliffe line.

At the time of partition of British India, one of the primary challenges before both India and Pakistan was how to equitably deal with the minorities living in both dominions. Both countries, however, hardly possessed any reliable or workable tool for the same. Therefore, in order to ensure rights to minorities, Pakistan chose to adhere to the fundamental principles and teachings of Islam required for establishing an egalitarian and pluralistic society.

Certainly, Islam ensures religious freedom to all individuals irrespective of religion or creed. The Constituent Assembly of Pakistan adopted the landmark Objective Resolution in 1948 which pledged to fully protect the rights of minorities in the countries. Later, all the subsequent Constitutions, promulgated in Pakistan, incorporated the principles laid down in this historic document.

In fact, secularism is a strong cohesive force in multi-communal India. It has successfully bound together with a country with a diverse religious configuration. It has played an important role in the national integration of India.

On the other side, Hinduism, as a religion, hardly provides any significant theological modus operandi to treat the non-Hindu minorities. Instead of emphasizing on pluralism, it has given rise to a compartmentalized society based on a hierarchical caste system. Therefore, in the absence of any appropriate religious code to deal with the minorities, India readily decided to adhere to the principle of secularism at the time of independence; ever since India has been trying to employ the very instrument of secularism to tackle its multi-communal society.

Is India Really a Secular State?

Despite the fact Hindus were in majority in the country, the founding fathers of India sagaciously decided to declare India a secular state instead of a Hindu nationalist state. Now the preamble to the constitution of India essentially signifies that India is a secular state. It says: “We, the People of India, having solemnly resolved to constitute India into a sovereign socialist secular democratic republic”. The constitution guarantees religious freedom to all communities including the freedom of worship, and the right to establish and maintain the religious institutions and organizations.

Although India is a declared secular state, there are many religious communities that have constantly been complaining about discrimination in the county. As a matter of fact, India has never been a perfect or ideal secular state. Sometimes, it is also referred to as the pseudo-secular state. However, the Congress Party, which has ruled India most of the time after independence, has been trying to maintain India’s secular face in the world. But regrettably, some Hindu nationalist parties, including the ruling BJP, have been trying to promote Hindu nationalism in India at the cost of its secular image in the world.

In fact, secularism is a strong cohesive force in multi-communal India. It has successfully bound together with a country with a diverse religious configuration. It has played an important role in the national integration of India. Therefore, if India deliberately chooses to undermine, or otherwise abandon altogether, its secular character, then there will be no instrument to hold together its multi-communal population within a single geographical entity.

Consequently, there would be great chaos in India which may seriously endanger its national integrity. Observably, the separatist and freedom movements in various provinces, namely Kashmir and Punjab, have intensified since the BJP assumed power in India in 2014. Therefore, the Indian politicos, while selfishly endeavoring to expand their political capital in the country, shouldn’t let the very ideological pedestal crumble upon which the whole edifice of India’s statehood rests.

Mohsin Raza Malik is a lawyer and columnist based in Lahore. He can be reached at mohsinaza.malik@ymail.com or @MohsinRazaMalik. This article was first published in The Nation and has been republished with the permission of the author. The Views expressed in this article are author’s own and do not necessarily reflect the editorial policy of Global Village Space.

Pulwama: An equilibrium of deterrence that fell apart