Hong Kong lawmakers have recently voted in a controversial new Chinese security law, which makes it illegal to insult the national anthem. Pro-democracy Hong Kongers and parties are furious, as they believe their freedoms are being stripped away. 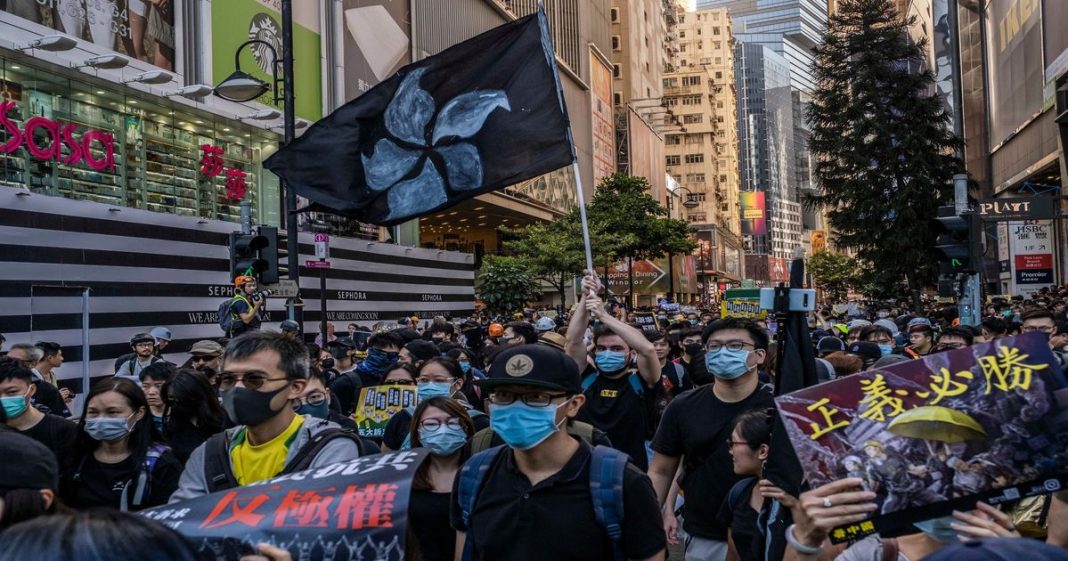 Lawmakers approved the bill with 41 in favour and one against, but the 75-seat chamber’s pro-democracy faction refused to vote and instead shouted slogans denouncing the law.

The vote came as Hong Kongers marked the 31st anniversary of China sending tanks and troops to crush pro-democracy protests in Beijing’s Tiananmen Square, and opponents rallied around the symbolism of the timing.

One lawmaker threw a foul-smelling liquid on the legislature’s floor in a bid to halt proceedings.

Others gave impassioned speeches denouncing the law, which carries up to three years in prison and fines for anyone who insults the “March of the Volunteers”.

“If you want people to respect the national anthem, I’m afraid you have chosen the wrong approach, it is counter-productive,” pro-democracy lawmaker Wu Chi-wai said during the debate.

Wu quoted the first line of the anthem, a revolutionary call to arms that declares: “Arise ye who refuse to be slaves.”

“The Central People’s Government is suppressing us and we are forced to become slaves of this regime,” Wu added.

The legislature is stacked with pro-Beijing lawmakers, and only half the chamber is elected by popular vote.

Hong Kong’s government has rejected the idea the anthem law restricts political freedoms, saying many other nations have similar laws.

“Some people said this is a vicious law and will suppress our freedom of speech. That does not exist at all,” Constitutional and Mainland Affairs Minister Erick Tsang told reporters after the vote.

He said people would only be prosecuted if they “openly and deliberately” insulted the anthem.

Hong Kong has furiously protested the introduction of Chinese laws

Beijing has been infuriated by Hong Kongers — especially football fans — booing the national anthem in recent years to signal dissatisfaction with China’s rule.

Stanley and Qincheng are maximum-security prisons in Hong Kong and mainland China, respectively. Qincheng, located in northwest Beijing, is the infamous facility where numerous human rights defenders and political activists have been jailed, including the late Nobel laureate Liu Xiaobo. Xinjiang is the site of an ongoing systematic campaign of mass arbitrary detention, political indoctrination, and invasive surveillance targeting Uyghurs and other predominantly Muslim minorities.

In April, Hong Kong authorities detained 15 pro-democracy activists and charged them with offences relating to “unlawful assemblies”. The kinds of peaceful advocacy these 15 activists have engaged in would have long ago landed them in jail or worse if they had been subject to mainland China’s jurisdiction.

Once those protests abated, Beijing urged Hong Kong’s leaders to push ahead with laws similar to those on the mainland outlawing insults to the anthem.

They have also announced plans to impose a new national security law that will bypass the often gridlocked local legislature, a move that has sparked significant alarm.

Under a deal agreed with Britain ahead of the 1997 handover, China agreed to allow Hong Kong to keep certain freedoms and autonomy.

Many Hong Kongers fear those freedoms are being prematurely eroded, a charge Beijing rejects.

China’s parliament considers it “necessary to improve and uphold the ‘One Country, Two Systems’ policy,” Zhang said, referring to the arrangement that has underpinned the city’s liberties and free-market economy.

Read more: New Chinese security law to be the end of Hong Kong

The city enjoys freedoms unseen on the Chinese mainland which are protected by an agreement made before former colonial power Britain handed the territory back to Beijing in 1997. An attempt to enact Article 23 in 2003 was shelved after half a million people took to the streets in protest.

US State Department spokeswoman Morgan Ortagus warned that imposing such a law on Hong Kong would be “highly destabilizing, and would be met with strong condemnation from the United States and the international community”.

The new anthem law needs to be signed by Chief Executive Carrie Lam and is expected to become effective from 12 June.

News Desk - 7 May 2021
The assembly plant will reportedly have the capacity of producing 28,000 vehicles per annum. According to the original plan, the construction was supposed to begin in 2020, but things got delayed due to the onset of the pandemic.

China unlikely to rejoin nuclear talks with US: Russia