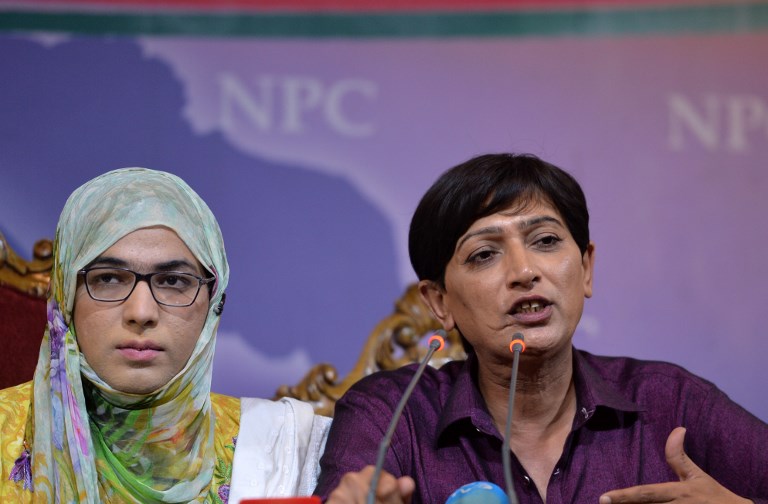 “Give me a chance,” Nadeem Kashish pleads with voters in Islamabad. Her struggle is not for power — she knows her campaign is futile — but for acceptance, as transgender candidates make historic bids in the upcoming Pakistan election.

People who identify as transgender number at least half a million in Pakistan, according to several studies — possibly up to two million, say TransAction, a rights organisation.

“I am contesting for the first time and your vote will give me my identity,” Kashish tells residents as she goes from door to door in a low-income neighbourhood near the Sufi shrine of Bari Imam, in the north of the capital.

Kashish, slender and clad in yellow plaid, is contesting in a district that pits her against incumbent prime minister Shahid Khaqan Abbasi and opposition leader Imran Khan.

She is armed with small black and white leaflets displaying her picture and mobile phone number which she hands out enthusiastically to everyone she meets: shopkeepers, motorcyclists, pedestrians.

Two sentences printed on it amount to her manifesto: “Preserve water for the next generation” and “I need your support”.

But the vote on July 25 is not about winning or losing for Pakistan’s transgender activists, she says. “We have been given support and space by the government (to contest the elections) and we will use this opportunity with full force.”

Known in Pakistan as “khawajasiras” — an umbrella term denoting a third sex that includes transsexuals, transvestites and eunuchs — people like Nadeem have long fought for their rights in the patriarchal, deeply conservative Islamic country.

Kashish says the main message is that transgender people are part of Pakistan’s budding democracy and can help move it forward.

Many modern-day transgender people in Pakistan claim to be cultural heirs of the eunuchs who thrived at the courts of the Mughal emperors that ruled the Indian subcontinent for two centuries, until the British arrived in the 19th century and banned them.

In 2009, Pakistan became one of the first countries in the world to legally recognise a third sex, allowing those who see themselves as such to obtain identity cards, and several have run in elections in the past.

This year Pakistan’s parliament passed a historic bill providing transgender people with the right to determine their own gender identity in all official documents, including choosing a blend of both genders.

But the nationwide vote on July 25 is a historic one for the community as authorities have removed gender as a criteria for candidates, meaning that, for example, men who identify as women are no longer forced to run as men.

The same goes for voters, says Altaf Ahmad, a spokesman for the Pakistan Election Commission. “(Transgender people) will have the liberty to vote at the women’s polling booth or the men’s,” he told AFP.

In fact, they will be given priority voting, able to skip the long queues expected to form on election day. People who identify as transgender number at least half a million in Pakistan, according to several studies — possibly up to two million, say TransAction, a rights organisation.

They are among the most politicised minority communities in Pakistan. Originally a record 13 transgender candidates sought to contest the 2018 election, though nine had to withdraw, mainly due to lack of funds.

Read more: Pakistani Trans-gender’s have faster access to ID cards; thanks to Chief…

Their campaign weapons are primarily social media and local meetings. “But I still believe that they will bag a few votes,” says Uzma Yaqoob, head of the Forum for Dignity Initiatives (FDI). Kashish says the main message is that transgender people are part of Pakistan’s budding democracy and can help move it forward.

This month all four transgender candidates appeared together on a local radio show which she hosts. Fellow candidate Lubna Laal, who is contesting in Punjab province, said there was still a long way to go.  “Our family members do not accept us,” she said. “Society too does not accept us, which is the main problem.”

Urbanization and declining agriculture: How to balance them off?