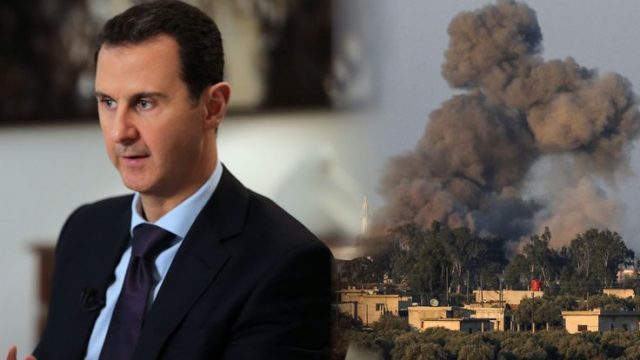 In summer of 2012, rebel forces were knocking on the doors of Damascus, half of Aleppo was lost to anti-regime forces and almost every major Syrian city (except those in western Syria) were either contested or under complete control of Western-backed Free Syrian Army (FSA). To make matters worse for Assad, 2013 saw the rise of Al-Qaeda backed Al-Nusra Front and self-proclaimed Islamic State (IS) group.

These extremists groups wreaked havoc across the landscape of the war-torn country and committed medieval style atrocities. Security analysts in Washington and other western capitals predicted an end of Assad rule by the fall of 2013 or the beginning of 2014.

Fast forward to 2018, the Syrian regime and allied forces now control almost every major city in the country. Aleppo (the largest Syrian city before the civil war) was retaken after a bloody battle. Only Idlib province remains the hub of largely Islamist rebels (including al-Qaeda), many of whom were allowed to travel there in return for surrendering territories elsewhere. This large pocket is now exposed to the Syrian army and Russian aerospace forces and a protracted effort by regime to retake it might mean the end of FSA and Al-Nusra (now known as HTS).

In July last year, regime forces launched a successful campaign to retake rural Raqqa and lift the siege of Deir-az-Zoor which was besieged by IS for well over three years. The IS is now on run, a situation unthinkable only a year ago. Analysts now believe that Assad is the victor in this brutal civil war. Rebel pockets around Damascus are also being cleared and the immediate threat to the Syrian Capital has been averted.

But how did this happen?

The toppling of Qaddafi regime form power in 2011 through proxies proved an economical and effective strategy for US and its allies (conventional war in Iraq proved exorbitant and deadly for US). Planners in Washington and NATO realized that by providing outmoded weapons, training and sometimes air cover to the opposition forces; fragile regimes in the Arab world could be toppled.

Stirred by the Libyan experience, US and its allies in NATO & GCC employed the same strategy in Syria. The expeditiously created Free Syrian Army (FSA), consisting mostly of pastoral Syrians and army deserters, was provided with weapons and training. This dilapidated rebel army was expected to defeat one of the most powerful armies in Middle East.

Initially, FSA enjoyed success due to its secular sloganeering and confusion among the regime forces due to the scale of the rebellion, but it failed to topple Assad. Frustrated by the performance of rebel forces, western powers started shipping trained and battle hardened ‘Jihadists’ from Libya and elsewhere into Syria with a hope to rout the Syrian Army and capture Damascus.

The introduction of western backed foreign Jihadists in Syrian civil war had an adverse impact. Though these fighters (forming various groups and some joining FSA) did make a difference on the battlefield, it resulted in two major outcomes which turned the tide of war in favor of Bashar Al Assad.

First, the secular Syrians who initially joined or at least sympathized with rebel forces were upset by the blending of Jihadists in FSA. Middle class, educated Sunnis were attracted to the rebellion due to its appearance as an armed struggle for freedom and democracy; the entry of extremists into the civil war led to their discontentment from the uprising.

Secondly, the entry of Jihadists in this internal armed conflict gave it a sectarian outlook which facilitated entry of thousands of Shiite fighters into Syria to fight on Assad’s behalf. These Shiite militias played a major role in fending off major rebel/Jihadist attacks on Damascus, Homs, Latakia and areas around Aleppo. Hence, a stalemate befell on the Syrian battlefield which favored Assad (who controlled urban centers and highways) more than the rebels (who mostly controlled rural areas).

Despite the deadlock on battlefield, FSA and Jihadists held the initiative and threatened Damascus. But one major event sealed the fate of these belligerent groups.

In mid-2013, Islamic State group emerged which launched a blitzkrieg and rapidly captured large swaths of territories in Syria and Iraq. The initial targets of IS in Syria were FSA and Al-Nusra Front since it sought to capture territory and present itself as the only alternate to regime in Damascus.

The pressure exerted by IS led to massive desertions from these armed groups to IS which was more organized than them and paid handsome amounts (salaries) to its fighters (IS generated revenues through sale of oil in black market).

Read more: IS in Syria to be defeated by February: French President

Zeeshan Munir is a Research Analyst and Sub-Editor at Global Village Space. He has a penchant for writing on the Middle East and International Humanitarian Law. The views expressed in this article are the author’s own and do not necessarily reflect Global Village Space’s editorial policy.