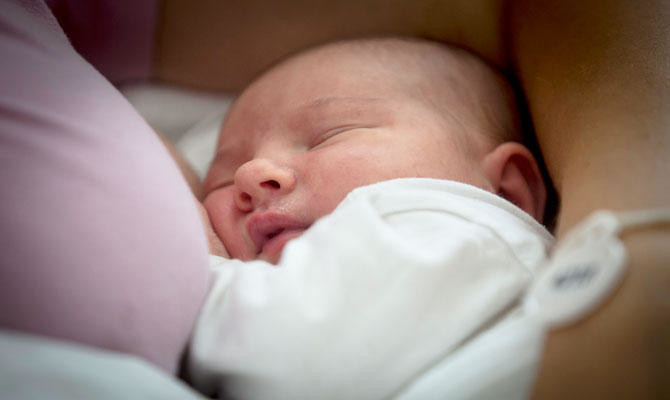 When Branka Stamenkovic gave birth to her first child in Serbia, the experience was traumatic. Minutes after the baby was born, nurses bundled up the infant and whisked him away, separating the mother and child for three days.

When they returned, the nurses gave Stamenkovic a cursory lesson in breastfeeding and sent the pair on their way. Upset, overwhelmed and in pain, Stamenkovic detailed her experience in a blog in 2008 that triggered an outpouring of similar stories from women across Serbia.

It also unwittingly lit the spark for a UNICEF campaign that has turned the Balkan country into a leading example of how to boost early breastfeeding rates. “I used to write the blogs and cry,” said Stamenkovic, recalling the horror stories that women sent her, including how nurses yelled, humiliated or ignored them, and failed to provide guidance on basics like breastfeeding.

The blogger, who has since become a politician, could never have predicted that her online efforts would have such an impact and says she is “glad” to have contributed to the change.

“I published over 700 stories online, and this is how UNICEF actually learned about the sad state of affairs of the baby-friendly programme in Serbia,” she told AFP. The UN children’s agency had first launched its “baby-friendly hospital initiative” in Serbia in the 1990s.

But after it handed the programme over to the government in the early 2000s, breastfeeding rates fell off a cliff, plummeting to eight percent in 2010. The UN agency pointed to the stories on Stamenkovic’s blog to make a case for re-booting the initiative. By 2014, the percentage of women breastfeeding within the first hour after birth was back up to 51 percent — a leap unseen among other middle and low-income countries.

Within an Hour of Birth

The World Health Organisation (WHO) and UNICEF — who are marking World Breastfeeding Week until August 7 — have long pushed for mothers to exclusively breastfeed babies during their first six months of life, starting within the first hour after birth. Breast milk produced during those early days is especially rich in nutrients and antibodies, boosting infants’ chances of survival by protecting them from infections.

But health experts must battle a multi-billion dollar baby formula industry, dominated by American firms, that aggressively advertises breast milk substitutes to mothers from day one.  Global debate over the issue was revived last month when a US delegation reportedly tried to water down a WHO resolution that called for the promotion of breastfeeding. US President Donald Trump added fuel to the fire when he came out in defence of formula, drawing criticism from health experts.

The early form of breast milk, known as colostrum, “is the best food that a human being can ever get,” said Djurdjica Cecez, a neonatologist at Belgrade’s Narodni Front maternity hospital. It is “precious and irreplaceable,” she added. One of her patients, 31-year-old Aleksandra Milenkovic, experienced two different approaches first-hand.

Two years ago she was separated from her baby boy immediately after giving birth. He was brought back to her the following morning and was already being fed a formula diet. Last week, at the same hospital, she delivered a baby girl and began breastfeeding immediately.

It also unwittingly lit the spark for a UNICEF campaign that has turned the Balkan country into a leading example of how to boost early breastfeeding rates.

“I had the fantastic opportunity to be with this baby and have it touch with me, skin to skin. We spent an hour like that and the baby was breastfed for the first time, which was wonderful,” Milenkovic said.  “I think that is the most beautiful thing that could happen,” she added with a smile, lying down next to her 24-hour-old infant, fast asleep.

The Job is not Done

Cecez, her doctor, noted that Serbia has made impressive gains in promoting early breastfeeding in recent years. Today, in order to be accredited, Serbian maternity hospitals must meet the “baby-friendly” guidelines that promote immediate skin-to-skin contact between mother and child after birth, breastfeeding within the first hour and support to keep up the practice.

But Cecez stressed that much more work needed to be done to improve maternity care in the country, from increasing hospital staff to improving the education of both health workers and future mothers. While breastfeeding rates in the first hour after birth have skyrocketed in Serbia, the figures fall off significantly in the following six months.

According to UNICEF, only 12 percent of mothers in Serbia exclusively breastfeed their children for that period of time. Breastfeeding can be “a very painful thing sometimes,” said Stamenkovic, recalling the lack of guidance she received at the time. “You need somebody to provide an emotional support, to cheer you up and say, ‘yes you can do it’.”

The blogger, who has since become a politician, could never have predicted that her online efforts would have such an impact and says she is “glad” to have contributed to the change.