How close was US to attack Iran? 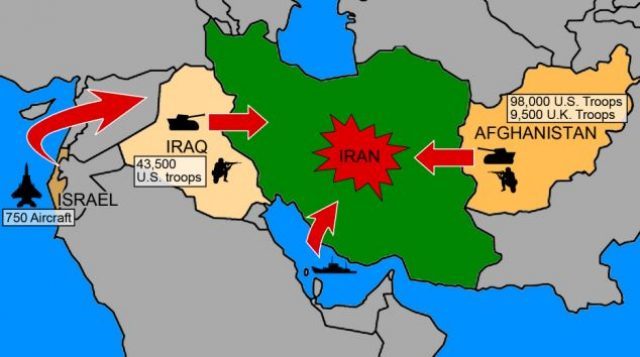 In September 2018, White House asked Pentagon to come up with a plan for striking Iran after an Iran backed Shiite militia rattled U.S embassy in Baghdad, Iraq, revealed the wall street journal. President Donald Trump’ appointed chief of National Security Committee John Bolton is known as the open critique of Iran over the years, therefore the shocking discovery made sense to many analysts.

It was mind-boggling for people inside White House and Pentagon as well since the rocket which fell near the embassy in Baghdad and a few days later just outside U.S consulate in Basra caused minimum damage and zero loss of life. A proposal for a direct hit at a state is seen a far stretch idea for something which was circumstantial and involves a third party.

The United States itself has championed the strategic “making and breaking” over the course of last 7 decades after WWII came to its logical conclusion.

Reportedly Pentagon did comply with the orders and a report was subsequently prepared catering all the options the United States had regarding making a strike inside the Iranian mainland. However, it is not revealed whether this report actually made to the President Trump’s table. Last year, United States of America pulled out of the Joint Comprehensive Plan of Action (JCPOA) and afterward imposing fresh sanction over Iran, putting the country’s economy once again to test.

When Secretary of State Mike Pompeo was asked about the report, he simply declined to make a comment. Mr. Pompeo is currently on a 9 Nations tour in Arabian Peninsula to build, which underlines a primary factor to fostering a broad base alliance against Iran.

He has also hinted at a ministerial-level conference to be scheduled next month where options would be reviewed to make Iran behave as “normal states do”. “There’ll be a broad coalition of countries present,” he said, “and we’ll work on many issues, including how it is we can get the Islamic Republic of Iran to behave more like a normal nation.”

JCPOA or Iran nuclear deal unchained the economy of Iran resulting once again in the stream of revenue coming from the export of an abundant yet precious commodity which Iran has, oil. It allowed the country to look after it’s strategic, some argue theological interest, in the regions of Iraq and Syria. Due to the insurgency in both these countries, Iran managed to take advantage of the situation resulting in implanting crucial proxies in Iran and Syria.

Another military campaign on foreign land, just next to active warzone of Afghanistan, would have turned as the logistical nightmare for the U.S despite all its military might.

A desperate call of a direct military attack on Iran is understandable since the attack carried out in Baghdad indirectly had Tehran’s support and there was nothing much which the U.S could have done to hurt Iran. Donald Trump was already adamant and was in no mood to listen to his western allies about pulling out of JCPOA, which he eventually did.

There is nothing anomalous which Iran might have done as it happens, nations states do take advantage of situations to extract strategic advantage for themselves. The United States itself has championed the strategic “making and breaking” over the course of last 7 decades after WWII came to its logical conclusion.

Therefore, terming Iran behavior as “rouge” is simply blowing it out of proportion. The fact that Iran’s increasing footprint is causing so much pain for the U.S is because of failed attempt to bring regime change in Syria followed by concerns of Israel and Saudi Arabia, both countries being allies of USA and sharing the contempt against Iran.

Most recent of U.S’ misadventures in Iraq and Afghanistan are still fresh in the memory of its military brass; probably that’s why it came as a shock for pentagon as well. Another military campaign on foreign land, just next to active warzone of Afghanistan, would have turned as the logistical nightmare for the U.S despite all its military might.

Even though the heinous plan did not materialize, the fact that “Cowboy mindset” is still existent in the minds of those who hold reins of power in White House is troublesome. Extremism and chaos are fostered on miscalculations and misadventures as evident from Iraq and Afghanistan invasion.

Environmental Degradation in Pakistan and its impact on Socio-economic development