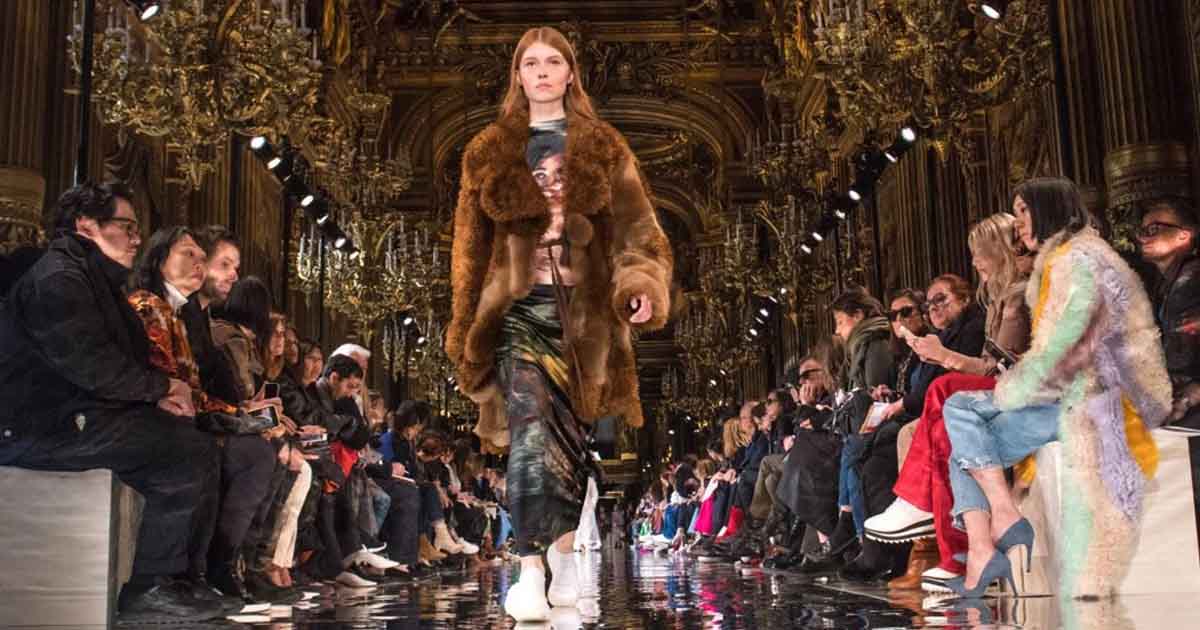 The very next show, Phipps’ “Treehugger, Tales of the Forest”, was teased on Instagram with pictures of rescued koalas from the Australian wildfires.

It was another sign that fashion now sees itself on the climate change frontline. But when AFP questioned Rhude designer Rhuigi Villasenor backstage, he admitted there was nothing sustainable about his collection.

He had found the stirring speech on the internet the day before, and didn’t know who had made it. But he insisted his clothes were  “timeless” and would “live through ages and trends”.

Campaigners say such “greenwashing” is typical of an industry “that is talking the talk but not walking the walk” on sustainability.

While Rhude is a young brand, it has a starry roster of clients from Justin Bieber to rapper ASAP Rocky and Ellen DeGeneres.

Yet some of the most fabled luxury houses in fashion — even some whose designers are activists for change — have found themselves caught short.

Dior’s last women’s show played hard on its eco-credentials. Set amid trees that were later used to create urban parks, it went heavy on eco-friendly hemp and raffia with models in Greta Thunberg plaits.

Designer Maria Grazia Chiuri told AFP that nature and “humans need to live together if humanity is to survive.”

“It is not just about image but action,” she added.

Weeks later a damning report by the Changing Markets Foundation on toxic pollution caused by viscose production put Dior and a swathe of other luxury labels including Prada, Versace, Fendi, Armani, Miu Miu and Marc Jacobs in the dock.

The much-vaunted biodegradable fabric — which often is used like silk, has been seen as a silver bullet for fashion’s eco woes, a way to wean it off synthetic fibres that come from the petrochemical industry.

While some fast fashion groups like H&M, C&A and ASOS — which luxury labels blame for fashion’s pollution and runaway overproduction — were praised for making progress in the in-depth “Dirty Fashion Disrupted” study, designer labels were excoriated.

“Three quarters of the luxury brands we looked at were failing to take any meaningful action to clean up their viscose supply chain,” its author Urska Trunk told AFP.

Viscose, which comes from wood pulp, is now the third most used fibre in the world and “genuinely has the potential to be a sustainable”, Trunk added.

Climate consciousness has become a fashion statement, but there's nothing behind it. Words will not bring change, only deeds can address fashion's massive contribution to climate change and its exploitation of climate victims. #ParisFashionWeek #PFW https://t.co/7wndJtyQgR

“Unfortunately most of it is still produced in a very dirty process,” causing water pollution and an alarming array of mental illnesses, strokes and cancer close to factories in India, China and Indonesia.

While she lauded British designer Stella McCartney for her transparency and ambition, “with most of the other luxury brands it is lip service, mostly hollow words… And that is a major concern.”

The report is the foundation’s second tracking whether brands were cleaning up their act. With only a handful of firms producing almost all of the world’s viscose, Trunk said pressure from brand could make “a massive difference”.

For Christie Miedema, of the Dutch-based Clean Clothes Campaign, brands have become expert as “eco messaging” with “one-off collections or clever initiatives to make it looking like they are doing something” without actually changing the way they operate.

More evidence of the #fastfashionfallacy:

Versace, which came bottom only to Walmart in the Changing Markets table, made the front pages by sending Brazilian supermodel Gisele Bundchen to New York’s Met Gala in a “100 percent green eco-dress” while Prada — which is also deep in its “red zone” — got admiring media coverage for their Re-Nylon “eco handbag”.

Dior is part of LVMH, the world’s biggest luxury group.

Unlike its main rival Kering and 24 other major clothing companies, LVMH pointedly refused to sign up to “The Fashion Pact” on fighting climate change at the G7 summit last year.

They will be found out

Owner Bernard Arnault — the world’s richest man — later criticised teenage activist Greta Thunberg for “surrendering to total catastrophism” even as he appointed McCartney his personal advisor on sustainability in September.

Kering — which controls Gucci and Saint Laurent — has since said it has gone carbon neutral and has vowed to halve greenhouse gas emissions in its supply chain within five years.

Joel Hazan, luxury goods analyst at the Boston Consulting Group, said the industry “had passed a tipping point”, and warned those who pretend to embrace sustainability would be found out.

“The demographics will make the difference,” he told AFP. “Eight out of 10 millennials expect labels to play a strong part socially and environmentally.”

Since almost all growth in luxury goods in the next five years “is predicted to come from millennials, brands have no choice” but to change, Hazan argued.

Indeed Vetements, the hot youthful rebel brand which has shaken Paris fashion in recent years, used its men’s show to pour scorn on its elders with slogans such as “Cutting down the bullshit”, “Fully sustainable show” and “It costs $0 to be a nice person”.

Previous articleJF-17 Thunder Block-III: Upgrades that brought it to the top
Next articleGovt. will build interchange for Faisalabad SEZ: Tareen

23 July 2021
Previous articleJF-17 Thunder Block-III: Upgrades that brought it to the top
Next articleGovt. will build interchange for Faisalabad SEZ: Tareen