How long will it take to go back to work?

The vaccine will take 12 to 18 months but research suggests if we keep social distancing for 3-4 months we can go back to work. But which type of lockdown will work?

President Donald Trump is eager to get the Covid-19 epidemic over with. On March 24 he voiced the hope that by Easter, April 12, the US could be “opened up and just raring to go.”

To most public health experts, that’s a fantasy. It took China two months of stringent, rigorously enforced lockdown to bring the flow of new cases to a trickle; Hubei province began easing restrictions on movement just this week. In the US, by contrast, only some states and counties have issued stay-at-home orders, and the first, in California, is barely a week old. America has now overtaken China in confirmed cases of Covid-19, with more than 85,000 as of this writing, and the curve is still accelerating.

Even if the US imposed (let alone could enforce) a Chinese-style lockdown between now and Easter, the spread of the disease would not slow nearly enough to justify lifting the restrictions at that point, and after they ended, the rate of new infections could skyrocket again.

In an influential report published last week, researchers at London’s Imperial College predicted that to bring the pandemic under control, countries like Britain and the US will have to maintain social distancing for stretches of two to three months at a time, with a month’s respite in between, until a vaccine or cure is found—possibly 18 months.

You can read all our coverage of the coronavirus/Covid-19 outbreak for free, and also sign up for our coronavirus newsletter. But please consider subscribing to support our nonprofit journalism.

Yet over the past few days a small but growing chorus of experts—call them “pandemic skeptics”—has been suggesting that such measures might be too draconian. There may in fact, they say, be far more undocumented cases of Covid-19 than we suspect—people who caught the coronavirus and developed no symptoms, or such mild ones that they didn’t realize they had it.

If that is true, it would be hugely important. First, it would mean that the disease kills far less than 3 to 4% of those it sickens, as some preliminary numbers have suggested. Possibly, say some of these experts, it’s not much more dangerous than the flu, which has an average fatality rate of about 0.1%.

And second, it would mean that we might be much closer than we think to attaining herd immunity—the point at which enough people have had Covid-19 to curb the rate of new infections because the virus has trouble finding new hosts to infect. Both these factors would mean that we could reboot the economy and normal social life a lot sooner.

The evidence for such claims is patchy but tantalizing. As Adam Kucharski, an epidemiologist at the London School of Hygiene & Tropical Medicine, wrote this week on Twitter, several small, preliminary studies from the cruise ship Diamond Princess, evacuation flights, and elsewhere have come up with wildly varied estimates of the true infection rate. On that ill-fated cruise, around 50% of all infections appeared to be asymptomatic, while other work suggests that the rate is something more like 1 in 5 cases.

One study that modeled viral spread in Wuhan before the city was locked down, meanwhile, said nearly 90% of total cases went undocumented. (That’s not the same as saying 90% are asymptomatic, but it suggests the virus has a substantial ability to circulate undetected.) And a modeling study (pdf) released by Oxford University researchers on March 24 suggested that as much as half the British populace may already be infected. 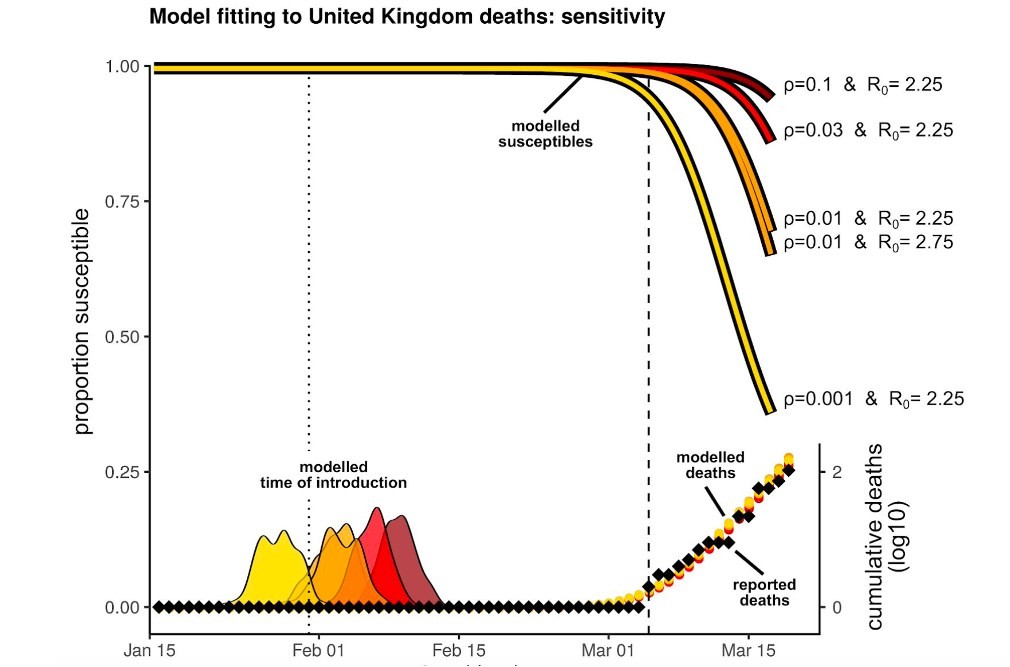 The new study, led by Sunetra Gupta, a theoretical epidemiologist, is the definition of hypothetical. It took the actual numbers of deaths from the Covid-19 outbreaks in Italy and the UK and inferred how many infections had to have happened to produce those deaths, using a range of assumptions about how fast the virus spreads (R0 in the chart below—a higher number means a faster spread) and what proportion of people come down with severe symptoms (ρ).

From this, the researchers ended up with a range of estimates of how much of the population was left to infect—the “proportion susceptible” in the chart. The orange and yellow lines are what drew the headlines, because they suggest that somewhere between a quarter and half the UK population could already be infected.

If this were true, it would be a dramatic finding. But it isn’t a finding—it’s a possibility. Therein lies the rub—or more properly, the data gap. Because most countries have ramped up testing so slowly, and because most people ask for a test only when they’re sick, it stands to reason that there are more cases than we know about. What we can’t know, because we’re not testing enough people, is whether there are three times more, 10 times more, or 100 times more.

This is the pandemic skeptics’ point: it remains possible that the cases we’re seeing are just the severe tip of a very large iceberg of mild or undetectable cases rather than, as most experts think, the beginning of an avalanche of serious ones. In an opinion piece for STAT, Stanford epidemiologist John Ioannidis called this an “evidence fiasco” and pointed to small bits of data from the Diamond Princess and elsewhere that were suggestive of a much less deadly disease.

Some of Ioannidis’s colleagues followed suit in a similar piece for the Wall Street Journal. Ioannidis wrote, “If the pandemic dissipates—either on its own or because of these measures—short-term extreme social distancing and lockdowns may be bearable. How long, though, should measures like these be continued if the pandemic churns across the globe unabated? How can policymakers tell if they are doing more good than harm?”

These perspectives represent absolutely legitimate, healthy debate among scientists about an emerging disease that’s been known to the world for only four months. The problem is, they’re being misinterpreted and even co-opted by policymakers. Ioannidis published his piece on March 17. A few days later, US President Donald Trump tweeted:

The skeptics, however, aren’t saying “Let’s stop the lockdowns.” They’re saying, “We need to test more people to find out whether what we think we know is right, or way off base.”

That means not only testing people for the virus itself to confirm a diagnosis of Covid-19—something that’s still very limited in much of the US. It means blood testing (also called serological surveying) of the population at random for antibodies that show they have had the virus at some point in the past.

Like taking an opinion poll of a few thousand people to gauge the whole country’s mood, a random serological survey would give a pretty good estimate of what proportion of the population has had the disease and recovered. Antibody tests are on the verge of being widely released in the UK for anyone to use at home. They, along with more rigorous studies, could provide the vital data we need to understand the virus we’re up against, and how best to fight it.

Read more: Coronavirus Pandemic: This is why prevention is better than Cure

Everyone wants to go back to work. Everyone wants to be able to go out and spend money at a restaurant, bar, or favorite local business. But doing so without knowing whether we might be spreading around a virus that could kill a lot of people in our community would be irresponsible. That’s why we need to test, and that’s what the scientists are arguing for.

In fact, that’s what Gupta and her team were shouting from the mountaintop. News reports typically don’t mention the titles of scientific papers they’re writing about, and for good reason—they’re powerfully dull and notoriously full of jargon. Gupta and her team were being pretty clear, though (emphasis added): “Fundamental principles of epidemic spread highlight the immediate need for large-scale serological surveys to assess the stage of the SARS-CoV-2 epidemic.” Really, we shouldn’t have read past the headline.