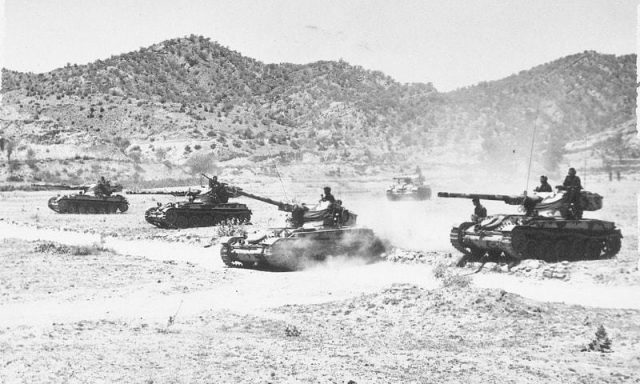 If we assign a combat power value of 1 to the infantry division, 1 to the mountain division, 3 to the armored division, and 2 to an independent armored brigade, we get following values:-

Adding up the values, we get a score of 12 for Pakistan, and 21 for India. Using Lanchester’s Equation, we square the values and get a combat value of 144 for Pakistan and 441 for India. Combat Power ratio (western front) at the start of the war was 3.0625: 1 in India’s favor.

The original plan for the operation code-named Gibraltar may have been prepared by the Pakistan Army as early as the 1950s, but, according to the folklore, was resurrected by Major General Akhtar Hussain Malik, GOC 12 Division. The plan called for infiltrating groups of “Mujahideen” comprising regular army troops and irregulars into IHK for contriving a local uprising and unfreezing the issue without provoking a general war (Hali,2012). It was almost going to be a replay of the first Kashmir war.

The mission assigned to the various infiltration groups was warfare in the enemy’s rear with a view to creating conditions for an open revolt against the Indian occupation. Within the four to six weeks time frame available one can imagine what sort of training, ground work, coordination with the local Kashmiris and logistics planning would have been done. The total strength of the “Gibraltar Force” was not more than 5,000 to 7,000 men subdivided into nine forces. Operation Gibraltar surprised the Kashmiris more than the Indian Army. Instead of receiving help from the locals, most of the infiltrators were handed over to the Indian Army. Those who were not discovered were in a more pathetic state since rations, ammunition, and supplies ran out.

Earlier, we had identified as an essential of military option

“Crafting a comprehensive plan aimed at achieving the military objectives across the Cease-fire Line while holding the enemy along the international border”.

In the Kargil sector, Srinagar-Leh road, Indian Army’s lifeline to Ladakh, was dominated by the heights held by Pakistan. Indian Army convoys traversing Srinagar – Leh road would frequently come under heavy fire from the Pakistani posts overlooking the road.

This required abandoning the limited war mind- set. Were the Indians going to sit idle? No. They would definitely retaliate by exploiting the weaknesses and gaps in Pakistani defenses.

Nothing was done to reinforce the holding troops and plug the gaps in own defenses. Alerted by the infiltration attempts and skirmishes with the Mujahideen, from 16th August onwards Indians increased their patrolling along the CFL. In the Kargil sector, Srinagar-Leh road, Indian Army’s lifeline to Ladakh, was dominated by the heights held by Pakistan. Indian Army convoys traversing Srinagar – Leh road would frequently come under heavy fire from the Pakistani posts overlooking the road. Indians had the compulsion to keep the CFL as far away from this road as possible.  Since 1948 Indians had been nibbling at the heights dominating this vital road. Despite the constant Indian threat, this sector was thinly held by the scouts. Indians had, therefore, no difficulty in capturing, in late August, some scattered and isolated Pakistani posts (notably Kuru, Laila, and Majnun) in this area.

In the confusion of battle, companies lost contact with each other and with their battalion headquarters. This was the state of planning to liberate Kashmir.

Between 25th August and 11th September Indians attacked and captured important Pakistani posts in Neelam and Jhelum valleys. It is not easy to capture a dominating feature held by a well- trained defender. Why were Pakistani defenses in the area falling like nine pins?

Read more: Why war with Pakistan — is not an option!

During Operation Gibraltar whole infantry battalions were pulled out from their defensive positions by bleeding the holding brigades (Sectors) to beef up the infiltration forces. Some of the units were hastily moved into the area from their peacetime locations. When the Indians retaliated by attacking Pakistani posts all along the CFL, the infiltrating units were recalled and asked to counter attack. There was little time for preparation.In the confusion of battle, companies lost contact with each other and with their battalion headquarters. This was the state of planning to liberate Kashmir.

In order to ease the pressure on 12 Division , which was defending against repeated Indian attacks, and to guard against the threat to the important city of Muzaffarabad, which resulted from the gain by Indian forces of strategic areas like the Hajipir Pass, the Pakistan Army commenced Operation Grand Slam at 0500 hours on 1st  September 1965.

When the attack recommenced on 3rd September, the Indian forces in the sector were sufficiently reinforced to hold out for a few more days, but they did not have the strength to launch a counterattack.

Chamb was defended by the Indian 191 Infantry Brigade Group (provisionally under command 15 Division) and a squadron of AMX-13 tanks. The infantry was stretched thin along the border and the AMX-13 tanks, though possessing the same firepower as the Pakistani M47  and M48 Patton tanks, were outnumbered in this sector. For the operation, Major General Akhtar Husain Malik had set up his headquarters at Kharian. Forces under his command were 3x infantry brigades (No. 4 Sector, 10 Brigade, and 102 Brigade), 2x armored regiments (ex 6 Armoured Division), and Artillery I Corps (Amin, 2000). Against a militarily stronger and larger Pakistani thrust, the Indian forces retreated from their defensive positions.

On the second day of the attack, Major General Akhtar Malik was replaced by GOC 7 Division, Major General Yahya Khan, which delayed the attack by one day. Not only did this decision cause confusion among the Pakistani officer cadre, the delay also permitted the Indians to rush reinforcements to the sector. When the attack recommenced on 3rd September, the Indian forces in the sector were sufficiently reinforced to hold out for a few more days, but they did not have the strength to launch a counterattack. The Pakistani attack staggered for two more days without any significant gains in territory. To relieve pressure from Chamb and Akhnoor, on night 5th /6th   September India attacked Pakistan along the Radcliffe Line. The advance of the Indian Army also threatened to cut across the right flank of the Pakistani attack. Realizing the gravity of the threat, the Pakistani Army stopped its thrust into Kashmir and diverted 7 Division to counter the Indian incursion.