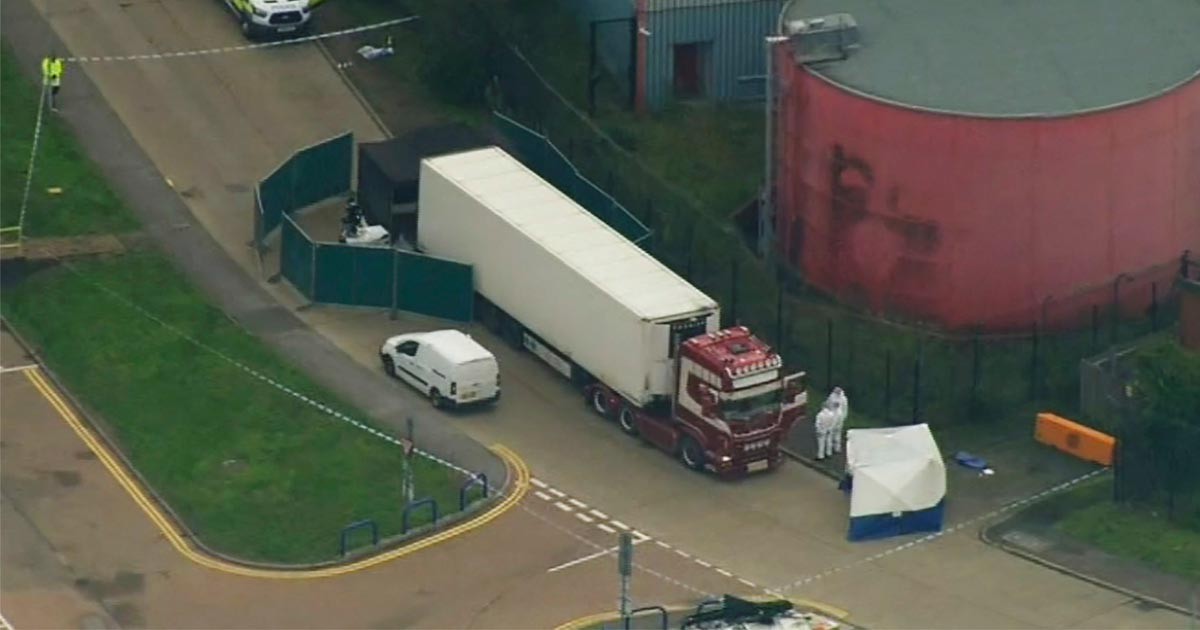 British police investigating the discovery of 39 bodies in a truck said Friday they had arrested three more people, as a security source in Hanoi said some of the victims could be Vietnamese.

The horrific case has shocked Britain and turned the spotlight onto the dangers of human trafficking. Police initially believed the victims were all Chinese nationals but said Friday that the “picture may change” on identification.

A Vietnamese man told AFP he feared his sister, 26-year-old Pham Thi Tra My, was among the dead and said she had sent a heart-wrenching message to their mother before her death.

Lee Tubby, 45, who lives opposite the port, said he has seen people “climbing out the top and out the back” of trucks.

My left Vietnam on October 3 en route to the United Kingdom and Pham Manh Cuong said their mother received a text message from her just hours before the truck was found in Britain.

“I’m sorry Mom. My path to abroad doesn’t succeed. Mom, I love you so much! I’m dying bcoz I can’t breathe,” she said in the message shared by the Vietnam-based Human Rights Space. Her brother confirmed to AFP the text message was authentic.

Essex deputy chief constable Pippa Mills said police would not be “speculating” on the nationalities of the victims, calling it a “developing picture”. In total, eight women and 31 men were found dead in the refrigeration trailer on Wednesday.

Read more: Prisoner Swap between Russia & Ukraine; Why are they so Important?

After detaining the truck driver at the scene — a 25-year-old man from Northern Ireland — on suspicion of murder, Essex police confirmed three additional arrests on Friday. A man and a woman, both aged 38 and from Warrington in northwest England, “have been arrested on suspicion of conspiracy to traffic people and on suspicion of 39 counts of manslaughter”, the force said.

It later announced that a 48-year-old man from Northern Ireland had been arrested at London’s Stansted Airport on suspicion of conspiracy to traffic people and manslaughter. The first autopsies were to take place Friday as investigators attempt to establish how they died before the work begins on trying to identify the victims.

The police investigation is Britain’s largest murder probe since the 2005 London suicide bombings.

Ambulances were called to a parked-up truck in an industrial zone in Grays, east of London, early Wednesday but the people inside were all already dead. The truck had arrived at nearby Purfleet on the River Thames estuary on a ferry from the Belgian port of Zeebrugge just over an hour before ambulance crews called the police at 1:40 am.

The first 11 corpses were recovered from the trailer on Thursday and taken to a nearby hospital mortuary. Three more private ambulances left the site on Friday. Autopsies will attempt to establish how the victims died and formal identification will follow.

A Vietnamese man told AFP he feared his sister, 26-year-old Pham Thi Tra My, was among the dead and said she had sent a heart-wrenching message to their mother before her death.

A Vietnamese security source in Hanoi told AFP on condition of anonymity: “We are monitoring the case very closely. There is a possibility there might be Vietnamese among the victims. The BBC said it had spoken to the families of three Vietnamese people who were worried their relatives may have been on board.

A spokesman for the Vietnamese embassy in London said they had been contacted by a family in Vietnam which claimed their daughter had been missing “since the lorry was found”.

Read more: Levels of ACCA qualification in the UK

Questions have been raised about when the victims entered the trailer. The crossing to Purfleet from Zeebrugge, one of the world’s busiest ports for cargo on trucks, takes nine to 12 hours.

A Vietnamese security source in Hanoi told AFP on condition of anonymity: “We are monitoring the case very closely.

Belgian investigators were working to establish where the trailer came from before reaching the port. “We have ways to reconstruct the route of the container but it’s not instantaneous,” Eric Van Duyse, spokesman for the Belgian federal prosecutor’s office, told AFP.

People living close to the port at Purfleet said clandestine immigrants were a familiar sight. “It’s a magnet for illegals,” said Janet Lilley, 61.

“People would come strolling out of the docks, get in the vans and that’s it, they drive off.” Lee Tubby, 45, who lives opposite the port, said he has seen people “climbing out the top and out the back” of trucks.

“We’ve had people just come out of the port knocking on the door asking for shoes, asking for water,” he said.