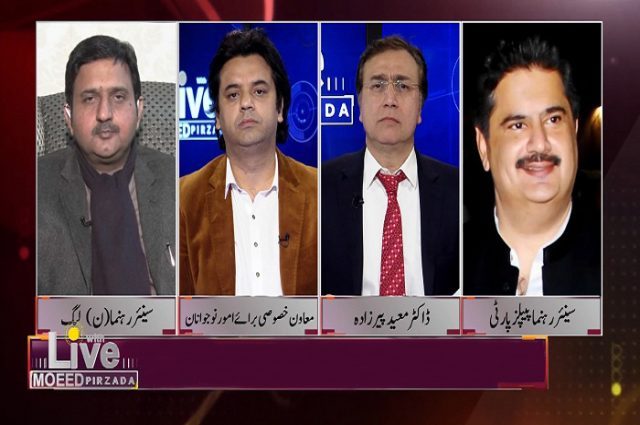 Nabeel Gabol, senior PPP leader confessed that he was about to join the PTI after leaving MQM in 2015. “As soon as I left MQM, I got the first call from Imran Khan and then from Jahangir Tareen who basically asked me to join PTI; even Arif Alvi came to my home. And I was about to join PTI. However, some of Karachi’s leaders especially the present governor (Imran Ismail) and IT Minister (Ali Zaidi) reached Bani Gala and start advising Imran Khan against me. I realized that Imran is weak in decision making and decided: to hell with PTI.”

Nabeel Gabol made these intriguing revelations while speaking to Dr. Moeed Pirzada on his prime-time show “Live with Moeed Pirzada” at GNN on 26th December. He also said that the government backed JIT has presented an interesting report. “Certain biased and irrelevant facts and figures are there which will be finalized in the upcoming two years. But why was the 128 page JIT report sent to ministers’ offices before being presented in court?

Also, what happened to that JIT which was supposed to inquire the Baldia Factory incident where 200 workers were burnt alive? Why Chief Justice hasn’t asked anything about it?” Gabol enquired. Referring to the political victimization under the banner of accountability, Nabeel Gobal said that the decision of sending Zardari to jail had come after the inception of NAB, which NAB has reversed owing to lack of evidence against Mr. Zardari. “NAB just wasted the courts’ and nation’s time and money.” he said.

Gabol said that these moves are less judicial and more political “For-instance, Musharraf must be blamed for irrelevant compromises and practices during PPP era while conducting Benazir’s death investigation. He could have rejected the deal in the first place, but the personal grudges between Musharraf and Nawaz gave an edge to PPP” Gabol added.

While defending the party’s stance on the issue of political victimization, Usman Dar, Special Adviser to the Prime Minister on Youth Affairs, said that the aforementioned JITs investigations are underway and will be completed soon. “But the number counting strategy on the part of Rana Sanaullah and PPP’s leaders is aimed at threatening the government in order to stop the accountability and corruption expeditions. Moreover, today’s (26th December) Rana Sanaullah’s statement is parallel to NRO discourse which has nothing to do with transparency”, Usman Dar said.

On the other hand, former spokesperson of CM Punjab Malik Ahmad Khan said that Rana Sanaullah’s statement may not be mixed with NRO’s or any other similar political move but that he is at open hostility with the current government against political victimization in the name of accountability and corruption. “The purity of court procedure is the fundamental pre-requisite of transparency and PTI should stop both the immature acts; dictation from courts and dictation to courts,” Malik Ahmad Khan said. Courts’ decisions are placed at top priority in concluding a person’s character whether he/she is a culprit or innocent, not political parties, he added.

Is Nawaz Sharif going to London for his treatment?

Pakistan’s Age of Accountability: Will it sustain itself?