Imran Khan explains to ECP that he had borrowed money from wife, Jemima Goldsmith, for purchase of Banigala Property

PTI chairman Imran Khan on Monday submitted to the Election Commission of Pakistan (ECP) a reply – similar to the position he had earlier taken in Supreme Court – explaining that he had borrowed money from his then wife, Jemima Khan, in 2002, to complete purchase of Banigala property. He rejected the charges of money laundering and tax evasion as ridiculous and politically motivated designed only to divert attention away from the panama case against PM Nawaz Sharif’s family in the Supreme Court.

Imran Khan is also defending these charges in Supreme Court in a separate petition filed against him, in early November, by Haneef Abbassi, PMLN leader from Rawalpindi. Abbasi accuses Imran of money laundering and not declaring his Offshore company in his tax returns as per the requirements of Income Tax  Ordinance, 1979.

Political analysts consider this legal battle a smart political move on behalf of the PMLN strategists who have equated Imran’s small nonfunctional Offshore company and minor discrepancies of record with the far serious Panama allegations against the Prime Minister’s family. Though in all probability commissions and courts will end up exonerating Imran Khan of all allegations but the petitions and media debate have created a moral equivalence for lesser educated public and given argument to the PMLN supporters that even Imran had Offshore company and if that was not a serious offense then why possession of Offshore companies can be considered serious in case of Nawaz Sharif and family.

During a hearing, Chief Election Commissioner retired Justice Sardar Muhammad Raza Khan said the decision on the disqualification references against Imran Khan and PTI secretary general Jehangir Tareen would be announced after the completion of arguments on Dec 15. Interestingly this time line is running parallel to the Panama case in Supreme Court where PTI and other parties have accused PM Nawaz Sharif of corruption.

In his written reply to the ECP, Imran Khan explained he had borrowed money from his ex-wife Jemima Khan to pay for the Banigala land because when he purchased the land in March 2002, the sale of his London flat got delayed. And he did not have full funds in hand to pay for the cost of land which was Rs. 43.5 million. (Rs. 4 Crore & 35 lakhs). He paid Rs 6.5 million from moneys available to him in Pakistan and borrowed the rest from Jemima which he subsequently paid her back. It was a short term loan arrangement between husband and wife. 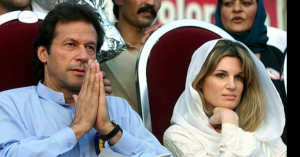 Imran’s reply explains that Banigala payment was to be made in instalments over a time period. And all these payments were made to the seller through crossed cheques. Funds from London came in remittances from time to time, all through regular banking channels. All amounts on conversion in Pak. Rupees were all declared to the the State Bank and records exist.

Imran Khan explained that after the sale of the London apartment in March 2003, he repaid and refunded the equivalent amount to Jemima Khan in the United Kingdom.

“Mrs Jemima Khan was the actual and recorded owner of the Banigala land. After their divorce the Banigala property was transferred in Imran’s name as a gift. This was in view of the fact that he had refused claiming any share from Jemima’s property and inheritance in London. Reply reminds the commission that in British law, with divorce both partners are entitled to half share of the whole assets.

Jemima is daughter of billionaire James Goldsmith, financier and tycoon, who was at one time considered 7th richest man in the United Kingdom and his inheritance ran over hundreds of millions of pounds.

The PTI chief provided detailed documents with his written reply to prove that full stamp duty payable on each transfer of the Banigala land had been paid and deposited with the treasury. There was no income or other tax incidence on such acquisition or transfer. “Therefore no question of tax evasion or any loss to the public exchequer…arises.”

He also rejected the allegations of misusing the 2002 amnesty scheme in Pakistan or of money laundering any undeclared asset or indulging in tax fraud. He said he had deposited 12pc of the total cost of the London apartment as tax, even though strictly there was no mandatory requirement in terms of the scheme.

Imran maintains that the apartment which had been purchased by him, in London, 33 years ago in 1983 was purchased from his tax paid income from county cricket. Those were the days when he frequently lived and worked in England because of his cricketing career. Offshore Company, Ms. Niazi Services Limited (NSL) was created on the advice of the property solicitors who considered it a normal legal practice to reduce tax burden after sales for someone, like Imran Khan, who was not a UK citizen. This Offshore Company (NSL) did not possess any other assets other than the London apartment, it lost all functional and legal relevance after the sale of the apartment in 2003. In his earlier reply to the Supreme Court, Imran has explained that he purchased the London apartment for Pound 117, 000 in 1983 and it was sold for 715,000 pounds in 2003. After paying the costs of the sale the balance of around 690,307 pounds was paid to Jamima as reimbursement of her earlier loans.

Previous article
Trump taking hits at the Dragon Kingdom
Next article
Talks on horizon between Afghan Taliban and Kabul Government?

Anger and desperation grow in search of earthquake survivors

No end in sight to Pakistan’s foundational issues

US would not hesitate to defend its national interests: Biden