Prime Minister Imran Khan is confident that the JUI-F’s chief won’t be able to exploit religious card against the government despite support from the PML-N and PPP. 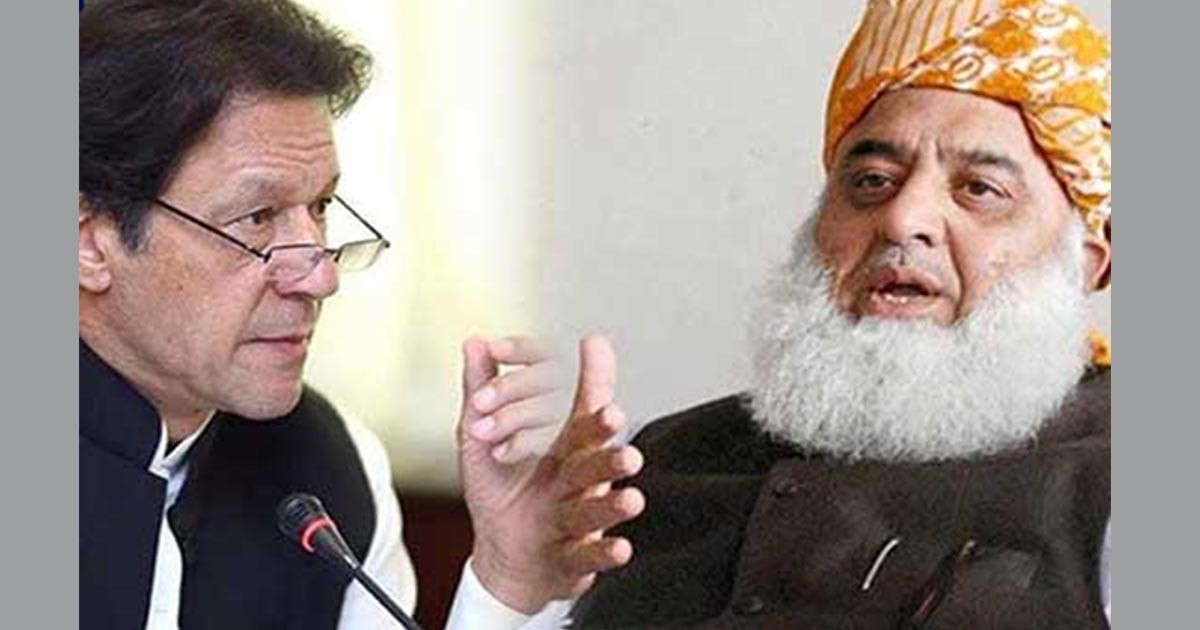 Prime Minister Imran Khan is not afraid of Jamiat Ulema-i-Islam (JUI-F) Chief Maulana Fazlur Rehman’s Azadi March. He expressed confidence in his team that is likely to deal with the JUI-F chief. The premier made it clear that Maulana won’t be able to exploit “religious card” against the government at the behest of the Pakistan People’s Party (PPP) and the Pakistan Muslim League (PML-N). Joint opposition is likely to back the JUI-F March to give a tough time to the incumbent government to seek some political concession.

Maulana has announced that the “March to oust the government would begin on October 27”. The opposition parties, PML-N and PPP, have requested him to postpone it. But the JUI-F’s chief has made it clear that he will run the March on the day Pakistan celebrates as Kashmir Solidarity Day.

Maulana Fazlur Rehman announces 27 October as the date for the Azadi March pic.twitter.com/VTlZNLAy0w

Maulana accuses the government of being ‘selected, unfair, incompetent and backed by a Jewish lobby’. He has made such remarks on several occasions against the premier and his team.

“The prime minister was of the view that PPP and PML-N are pretending that they are not taking part in the lockdown program, but in fact, both parties are backing him [Maulana Fazl] and providing him money to meet their own designs,” a close aide to PM Khan told local media.

The opposition may have some reasons other than religion to give a tough time to the government. But focus on religion looks propaganda to target personalities, not a campaign for the rights of people.

According to him, the prime minister lamented that Maulana Fazl was using innocent children of Madressahs (seminaries) against the government, but he [JUI-F chief] should realize that after the victory of the government’s stance on the Kashmir issue in the recently held United Nations General Assembly session, he would not be able to exploit the “religious card”.

The JUI-F has always been a party using religion to seek political support in rural areas of Punjab and KPK. The main target has been tribal areas.

Maulana Fazlur Rehman's JUI-F is a religo-political party and has never kept religion away from politics. Those who now accuse him of using religious card should be ashamed of saying so as they had fallen too low to grab power and used every kind of card, unheard of in history— Tariq Butt (@tariqbutt_) July 31, 2019

Political Fatwa of Maulana Fazul against the PTI

In May 2013 Maulana Fazlur Rehman declared it ‘haram’ to vote in favor of Pakistan Tehreek-e-Insaf chief Imran Khan and his candidates. He alleged Imran Khan for being sponsored by the West and the Jewish lobby. He also called Imran an agent of “Americans, Jews, Ahmadis and a person of ill character”.

Maulana further attacked Imran’s family and said that “a person who could not make his own children Muslim nor Pakistani, is dreaming of becoming prime minister of Pakistan and making the country an Islamic welfare state.”

It was interesting to note that when Maulana had to tell as to who said Imran was really an American or Jewish agent. Maulana confidently asserted that “I am asked, ‘what is the proof that he (Imran Khan) is an agent of the Jews,’ I say there is only one proof and it is my own responsible personality. I am so righteous that I would never talk ill against anyone. This is enough that Maulana Fazlur Rehman says that he is a Jewish agent.”

The use of religion against the current government after PM Khan’s emergence as the leader of the Muslim Ummah is worrying for many in Pakistan and abroad. The political uncertainty has become clearer after the government’s economic policy did not bear any fruit so far. The opposition may have some reasons other than religion to give a tough time to the government. But focus on religion looks propaganda to target personalities, not a campaign for the rights of people.

The Rise of HIV positive cases in Larkana: Where is the Sindh government?

Kashmir on Lockdown: India revealed as a Barbaric Oppressor