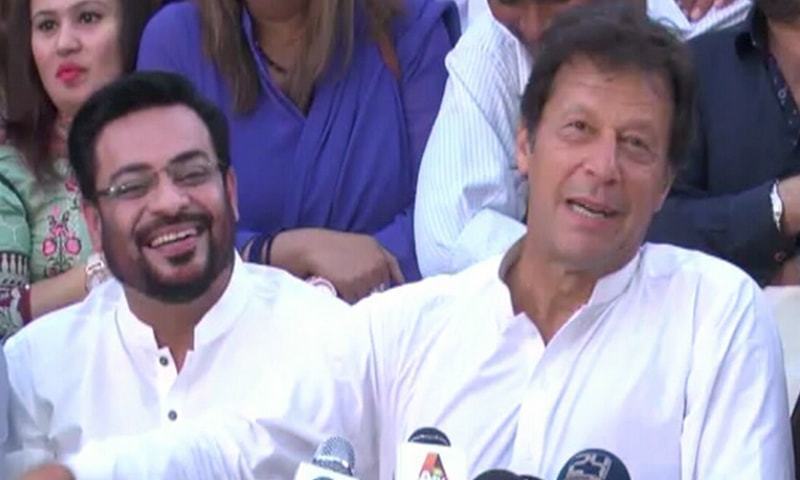 “It feels as if I was already a part of the PTI … this party is my final destination.  I have not joined [Imran] Khan but I have joined Pakistan … our joint fight will be against corruption,” he stated Mr. Hussain. PTI’s chief praised Mr. Hussain and called him as ‘the representative of youth’. Furthermore, Imran Khan said that “we want to take people on board to bring the change … Pakistan will not prosper until Karachi is developed”.

Dr. Hussain has an old habit of alleging his opponents for some extralegal activities whenever he feels not comfortable with the organization. He worked with the GEO but at the end of the day he accused Geo’s owner for being an Indian agent and working against Pakistan.

Moreover, during the news conference when a journalist asked Imran Khan a question with regard to Mr. Hussain’s derogatory remarks about the PTI. The PTI chairman defended Mr. Hussain and reminded the journalist that people change over the period of time. “I believe that people change for the better. As long as people are trying to be better than before each day, they should not be questioned about the things they said in the past,” stated Mr. Khan.

“I had a completely different view of religion during my cricketing days, but things have changed since then; the point I am trying to make is that people change,” he further said.

Aamir Liaquat Hussain, a son of politician Sheikh Liaquat Hussain and renowned columnist Mahmooda Sultana, contested his maidan electoral battle in 2002 on the ticket of Muttahida Qaumi Movement from NA-249 Karachi-XI constituency. He was also appointed as the minister of state for Religious affairs and Zakat and Ushar Division in September 2004 in Shaukat Aziz cabinet.

The inclusion of people like Amir Liaquat in the party is, argue angry PTI members, dangerous not only for the party but also for the young leadership who hold the principles of honesty, fair play and justice.

But in 2007 because of severe violation of party rules Mr. Husain was forced to resign from his seat as member of national assembly and as Minister of State for Religious Affairs. He quitted politics in 2007. MQM also expelled him from the party in 2008. Although Mr. Hussain had joined MQM again yet he parted ways with the party after anti-Pakistan speech made by the party head Altaf Hussain in 2016.

In 2017 there were some rumors as if Mr. Hussain was just joining the PTI. It was further confirmed by PTI’s Faisal Javed Khan who tweeted that “Dr Aamir Liaquat to announce joining PTI at a press conference on October 25 in Karachi.” But owing to public pressure PTI had to distance itself from the decision as many PTI followers conveyed a strong disapproval of the move.

Why PTI fans are not happy?

PTI’s fans and some leaders are not happy to have Mr. Hussain in their party. Dr. Hussain has used derogatory and utterly insulting words for Imran Khan and his PTI in his TV shows, argue those speaking up against Mr. Hussain. Although Imran Khan has made an effort to pacify the dissenters yet his assurance did not work up to the mark.

Aamir Liaquat has joined the PTI.

Okay, so I quit being a PTI supporter and voter now. It was fun fighting for the PTI I believed in for six years without being a party member/official.
No more 🤐— Mehr Tarar (@MehrTarar) March 19, 2018

Following the development PTI’s Adil Ansari quitted the party, saying “he was no more needed”. Many PTI’s followers on Twitter also twitted against the decision of their party head and parted ways with the party.

Precarious Turn for PTI ahead of Elections?

Dr. Hussain is known to be a political opportunist who has no defined political principles or any party on any ideological base. Accused for being a snollygoster, some dissenters within the party opposed his presence in PTI. Those campaigning against Mr. Hussain are the ideological members of the party who strictly believe in the basic principles and ideology of the party. PTI was launched to eliminate corruption, ensure law and order and to bring out young leadership in order to make Naya Pakistan. The inclusion of people like Amir Liaquat in the party is, argue angry PTI members, dangerous not only for the party but also for the young leadership who hold the principles of honesty, fair play and justice.

After 35 years of defending, supporting & justifying @ImranKhanPTI to the world , i no longer can. i fear that reptiles surround him.— salman ahmad (@sufisal) March 19, 2018

Furthermore, Dr. Hussain has an old habit of alleging his opponents for some extralegal activities whenever he feels not comfortable with the organization. He worked with the GEO but at the end of the day he accused Geo’s owner for being an Indian agent and working against Pakistan. Later on, he himself did not stand up with the allegations he had leveled. Recently, he left Bol TV and in the same fashion accused the channel for carrying out some objectionable policies and activities.

These aforementioned actions of Dr. Hussain are a matter of serious concern within the PTI for those who believe that rival parties might misuse Dr. Amir against the party or its head Imran Khan at any critical time.

But top leadership of the party is defending Dr. Amir’s presence in PTI for two reasons. Firstly, Dr. Hussain represents the youth and will help the party to organize and positively use the potential of youth. Secondly, some groups of Urdu-speaking community and people from Brelvi faction will now support the party because of Dr. Hussain’s presence. Whether Dr. Hussain remains in or quits the party, only the time will decide.

News Desk - 24 April 2021
The World Bank’s Board of Executive Directors approved $400 million in financing from the International Development Association (IDA) to support Pakistan in accelerating investments in education and health services in the Khyber Pakhtunkhwa (KP) province.

Exploring the unholy nexus between RSS and Modi’s BJP

China: Xinjiang exports to US doubled in first quarter despite sanctions

Dissection of the idea of “Public Executions” and “Dignity”