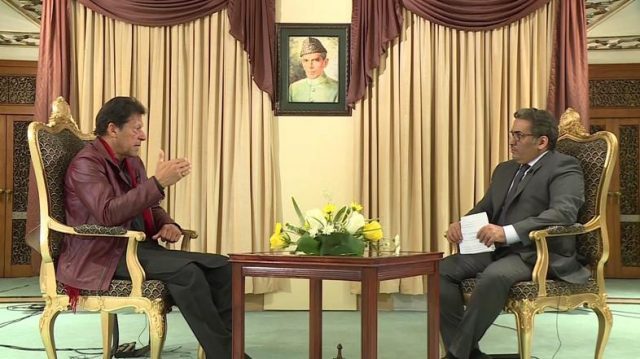 The latest video of Imran Khan in the Medina airport has sparked another controversy. In a video circulating on social media, Khan is seen coming out of the plane in socks to meet the Saudi officials gathered to welcome him.

The controversies seem to follow Imran Khan wherever he goes. The video has sparked a debate on social media; people are questioning his intentions to walk out of the plane without shoes.

Read more : Khan reveals he only had spiritual interactions with Bushra Maneka

Many believe he did this in respect and love for the Holy Prophet (PBUH) since he spent an important period of his Prophet-hood in Medina after migrating from his hometown, Mecca.

The video has sparked a debate on social media; people are questioning his intentions to walk out of the plane without shoes.

Other cracked jokes and said Imran Khan’s shoes were possibly stolen. Some commentators remarked that it is not possible for Khan’s shoes to be stolen since he is traveling in a chartered plane.

The Pakistan Tehreek-i-Insaf Chief Imran Khan traveled to Saudi Arabia to perform Umrah with his wife, Bushra Maneka. He visited Roza-e-Rasool at the Grand Mosque in Medina on 11th June, to commemorate the sacred night of Laila-tul-Qadr on 27th Ramadan.

The couple will perform Umrah and will return to Pakistan before Eid-ul-Fitr. Imran Khan’s two close aide – Aleem Khan and Zulfi Bukhari are accompanying the couple.

On Sunday, the Federal Investigative Agency stopped Zulfi Bukhari from traveling to Saudi Arabia along with Imran Khan. The agency stated Bukhari’s name was on the Exit Control List due to several inquiries in process in NAB, hence he could not leave the country. Other media reports claimed Bukhari had incomplete travel documents which made the FIA stop him from boarding the plane. Bukhari, after an hour-long investigation, was cleared by the authorities to board the plane.

Imran Khan has left Pakistan amid the heated discussion of his marital relationship with his ex-wife, Reham Khan. The book contains objectionable content as Reham Khan has leveled some serious and offensive allegations on Imran Khan and the senior leadership of PTI.

Previous articleUS officials question their state’s Af-Pak narrative
Next articleTrump-Kim Summit: History made as both leader convened in Singapore

23 July 2021
Previous articleUS officials question their state’s Af-Pak narrative
Next articleTrump-Kim Summit: History made as both leader convened in Singapore