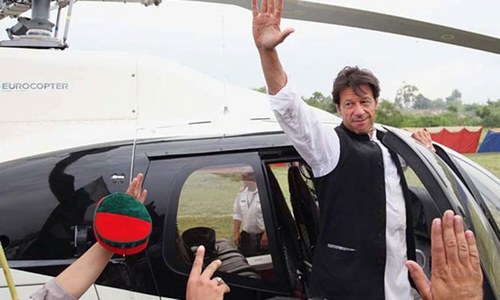 Pakistan Tehreek e Insaf chairman, Imran Khan, is undergoing investigations against him by the NAB, for alleged misuse of  Khyber Pakhtunkhwa government’s official helicopters for personal travels. Khan was ordered to appear before Wednesday (today), however PTI, in a letter to NAB, informed them about Khan’s unavailability due to his busy schedule.

Read more: NAB initiates probe against Nawaz, Abbasi and Shehbaz over ‘misuse of…

Khan is accused of using the government choppers for 74 hours, each hour costing the government 28,000 rupees. NAB states that Khan should have paid the KP government 11.1 million rupees, but official documents only mention payments worth 2.1 million. However, PTI has negated these accusations and defended the use of the helicopters by exerting that the use was only for official trips.

The KP govt has made clear there was never any personal or private use of the govt heli by me. We welcome NAB examining this issue and hope it will also look into abuse of official planes, helis etc by Zardaris and Sharifs. pic.twitter.com/LncQrjTRk5

Babar Awan, Khan’s lawyer, has requested NAB to set the date for the case on 8th of August. PTI released a statement welcoming NAB’s investigation into the alleged misuse of helicopter. PTI has always alleged to support open, free and fair investigations, however despite initially welcoming the helicopter misuse investigation case, Imran Khan has decided to skip the first call  made by NAB for his appearance.

CM Khattak used off heli 2 make it back 4 budget session,BUT Chairman IK has conveyed categorically it was wrong and should not be repeated.

PTI has always alleged to support open, free and fair investigations, however despite initially welcoming the helicopter misuse investigation case, Imran Khan has decided to skip the first call  made by NAB for his appearance.

The use of State’s resources in electoral campaigns gives one an unfair advantage, compromises the integrity of an election, and reduces the public’s trust in the legitimacy of the electoral process and its outcomes, that is all heavy, on the taxpayer’s pocket.

Amir Khan admits he embarrassed himself in public feud with wife

Labour lack of confidence in May ends the Brexit truce