Prime Minister Imran Khan is scheduled to meet US President Donald Trump at the White House today. COAS Gen Qamar Javed Bajwa will also accompany the premier as part of his delegation. The PM will also meet with the leadership of the IMF and World Bank, alongside the Pakistani-American business community. 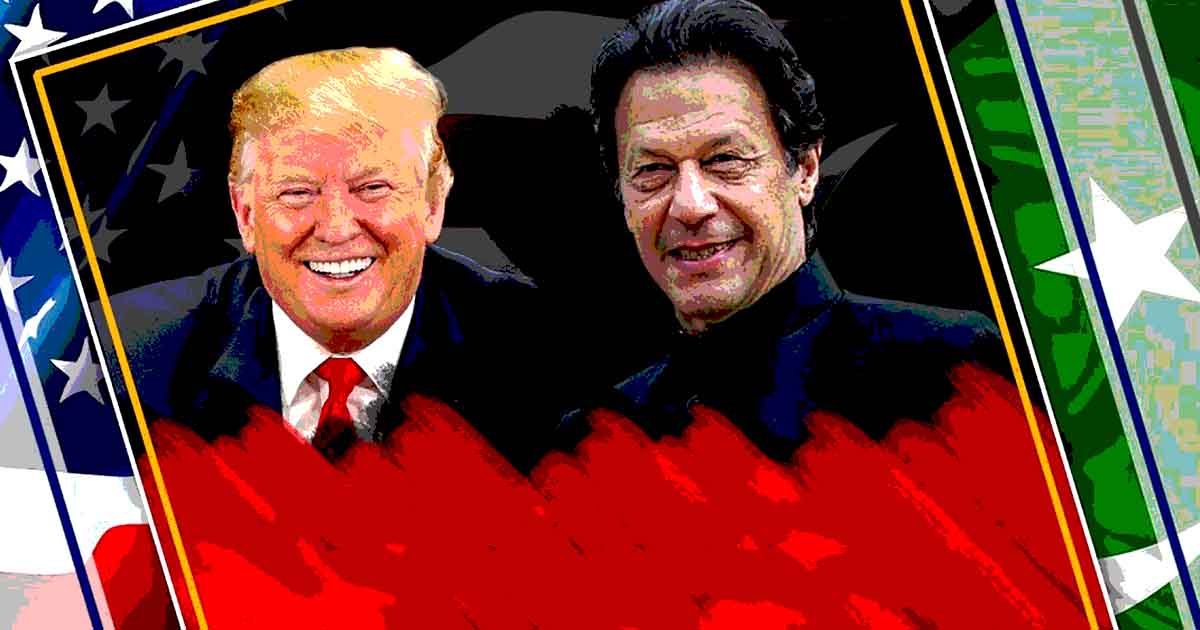 Prime Minister Imran Khan is due to meet the US President Donald Trump at the White House today. Upon his arrival in Washington, the Premier was received by senior officials from the US Department of State. He was accompanied by a high-level delegation, including Foreign Minister Shah Mehmood Qureshi, Foreign Secretary Sohail Mehmood, and the Pakistani Ambassador to the US, Dr. Asad Majeed Khan.

At the White House, Prime Minister Khan and US President Donald Trump will discuss the issues of defense cooperation, counter-terrorism, trade, energy, and the common goal of ushering in peace and stability across South Asia. Analysts believe that President Trump is largely focused on Pakistan’s role in facilitating the Afghan reconciliation process.

The Trump administration has noted that Prime Minister Imran Khan’s visit will usher in an era of stability in the US-Pakistan partnership, alongside promoting strengthened relations. Representatives from White House noted that the ongoing visit is focused towards enhancing bilateral cooperation, to usher in peace, stability and economic growth, and eliminate conflict from the South Asian region.

Upon reaching the residence of the Pakistani Ambassador Dr. Asad Majeed Khan, the premier was received with a fitting welcome. He later addressed a mammoth of a crowd, dazzled and enthusiastic Pakistani-Americans at the Capital One Arena in Washington.

The Pakistani-American community welcomed the Prime Minister with a glorious welcome, the premier shared with them his agendas for a Naya Pakistan, and to undertake a transparent and undisturbed accountability process against corrupt leaders.

Prime Minister Imran Khan reiterated that he would not give NRO to plunderers and showed firm resolve to carry forward the process of accountability without being subdued to any pressure or blackmailing. pic.twitter.com/WGTswrzCPk

The premier has multiple engagements today, and after his meeting with US President Donald Trump, he is scheduled to attend a meeting with the World Bank President David Malpass and the IMF’s interim Managing Director, alongside addressing the Pakistani-American business community.

Talking to "All Star Group" comprising leading IT professionals in Washington DC, Prime Minister Imran Khan said development of IT is amongst highest priorities of the government as this sector entails huge job opportunities for the youth. pic.twitter.com/Ql0Qh6Q5gF

The premier also addressed the Pakistan Business Summit, apprising the investors of the unique investment opportunities that Pakistan can provide to the business community.

Earlier, Foreign Minister Shah Mehmood Qureshi had announced that the Chief of Army Staff (COAS) General Qamar Javed Bajwa will also accompany the Prime Minister, as part of his delegation, to the meeting with President Trump at the White House. This was later confirmed by Director General ISPR Major Gen Asif Ghafoor on Saturday, while addressing the press at the Pakistani Embassy, in Washington.

DG ISPR added that the COAS will also engage with the top US military leadership in meetings held at the Pentagon. He noted the internal security situation across Pakistan has improved considerably, which is accredited to the sacrifices of the people and the armed forces.

The border fencing endeavor undertaken by the Pakistan Army alongside the Pak-Afghan border had also aided in improving the security situation and reducing terrorist attacks and infiltration.

Major General Asif Ghafoor added that the armed forces are now focused towards ushering peace and development in Balochistan, and aiding the civil leadership in reconstructed areas affected by terrorism.

This Man is a Superstar

Analysts, both local and international, note that the policymakers in Washington are now well aware of the influence and popularity yielded by Imran Khan. The massive turnout at his community address at Washington’s Capital One Arena has given the US visit a dynamic fervor, cementing the popularity of the PTI-leadership.

Sharing his observations Adam Garrie, American Newsman and Commentator, tweeted, “Most of the people in the stadium watching Imran were Pakistani-Americans. But I am sure there were some Americans with no connection to Pakistan in the audience watching and thinking: “this man is a superstar”. He is. Now it’s time for superstar policies”

Garrie continued, “At a time when politics is sadly getting more and more violent in many countries, it is important to note that Imran Khan’s rally in America was completely peaceful, positive and patriotic. I suppose that’s because certain jailbirds were not in the same hemisphere.”

The American political commentator added, “Imran Khan now holds the record for addressing the largest crowd in the USA of any Pakistani leader. Now it’s time to say good riddance to bad rubbish at home and consolidate power for the benefit of the people.”

Jan Achakzai, notable political analyst and Chairman of the Centre for Geo-Politics and Balochistan, also observed that Imran Khan received a reception worthy of a leader who addresses the hopes and aspirations of his people.

Achakzai tweeted from his official handle, “Unprecedented crowd in Washington to listen to Prime Minister Imran Khan’s speech, which reflects hopes of overseas Pakistanis. They love Pakistan & want a leader who can deliver on their aspirations to turn their country of origin into a strong nation.”

The Baloch analyst noted, “Clock is ticking 4 the Prime Minister.”

They love Pakistan & want a leader who can deliver on their aspirations 2 turn their country of origin into a strong nation.

Achakzai continued, “A mammoth rally in Washington was a reflection of PM Imran Khan’s popularity among overseas Pakistanis. He is still a star, a crowd puller, an inspiration & a hope for them. The incumbency has not waned his charisma among them.”

A mammoth rally in #Washington was a reflection of PM Imran Khan’s popularity among overseas Pakistanis.

He is still a star, a crowd puller, an inspiration & a hope for them.

The incumbency has not waned his charisma among them. https://t.co/pKkFfQAfzj

Previous articleWho will be the next UK Prime Minister?
Next articlePM Khan’s popularity remains unchanged despite controversies

17 September 2021
Previous articleWho will be the next UK Prime Minister?
Next articlePM Khan’s popularity remains unchanged despite controversies

The unplanned cities of Pakistan: A problem without solution

Why Pakistan’s Economy is fragile after 72 years?