In Iraq, political wrangling spawns debate over US troops 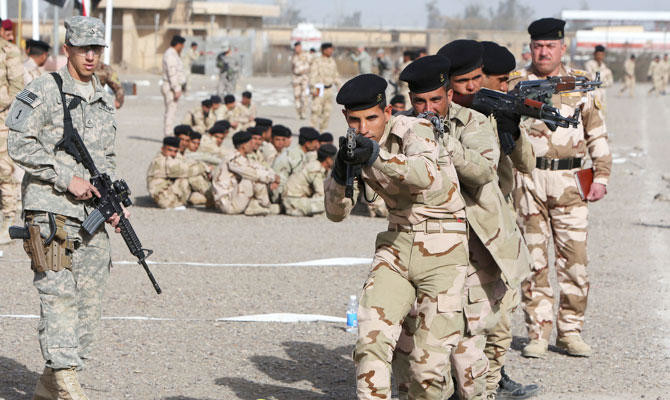 From the halls of parliament to the lightning-fast rumour mills of social media, pro-Iran factions are demanding US troops withdraw from Iraq in a challenge to the country’s fragile government. The political wrangling is another indication of Iraq’s precarious position as it tries to balance ties between two key allies — the United States and the Islamic republic of Iran.

Calls for a US pullout have intensified since President Donald Trump’s shock decision last month to pull troops from neighbouring Syria, while keeping American forces in Iraq. In recent weeks, pro-Iran parties have organised protests to demand an accelerated US troop withdrawal while affiliated media outlets published footage of alleged US reinforcements in Iraq’s restive west and north.

Iraqis are more concerned with staggering unemployment, power cuts, and a political crisis that has left key ministries unmanned for months.

The debate is heating up in parliament as well. Last week a lawmaker demanded Prime Minister Adel Abdel Mahdi provide a written explanation for the ongoing US military presence in Iraq and a timeframe for their stay.

MPs are also drafting a law that would set a deadline for a US withdrawal, according to Mahmud al-Rubaie of the Sadiqun bloc, one of the political groups working on the text. “We categorically reject the presence of foreign troops in Iraq,” Rubaie told AFP.

Read more: US begins withdrawing gear from Syria, but not troops

But rather than a genuine, popularly-driven desire for a US withdrawal, the draft is part of the wider race for influence between Washington and Tehran, analysts said. “This talk is part of the power struggle between the US and Iran,” said Iraqi security expert Hashem al-Hashemi.

Tensions between the two countries have intensified since the US pulled out of the landmark 2015 nuclear accord negotiated with Iran in May last year, and observers fear they could destabilise Iraq.

Between Iraq and a Hard Place

American troop numbers in Iraq peaked at some 170,000 during the battle against Al-Qaeda and other insurgents that followed the US-led invasion of 2003. Trump’s predecessor Barack Obama ordered a withdrawal that was completed in 2011, but troops were redeployed in 2014 under a US-led coalition battling the Islamic State group.

The halls of parliament to the lightning-fast rumour mills of social media, pro-Iran factions are demanding US troops withdraw from Iraq in a challenge to the country’s fragile government.

In December 2017, Iraq announced it had defeated IS. Since then the number of foreign coalition troops has dropped from nearly 11,000 in January 2018 to 8,000 by December last year, according to the prime minister.

Coalition spokesman Sean Ryan says there are 5,200 US soldiers now stationed alongside Iraqi forces in various bases across the country. Their presence angers the Hashed al-Shaabi, a paramilitary force that is dominated by pro-Iran factions which played a key role alongside government forces in the fight against IS.

Read more: With eye on Iran, US steps up presence in Iraq –…

“The US has banned the Hashed from coming near the military bases where its troops are stationed,” said Hashemi. “So the Hashed is now adopting a reciprocal policy,” he said, by pushing for a US withdrawal.

Trump’s surprise Christmas visit to troops stationed in western Iraq has added fuel to the fire. Pro-Iran parties seized on the fact that he did not meet with Iraqi officials to slam the visit as insulting and a violation of Iraq’s sovereignty. Renad Mansour, a researcher at the London-based Chatham House, told AFP the revived debate over US troops was likely a swipe at Abdel Mahdi by hardline pro-Iran factions.

Tensions between the two countries have intensified since the US pulled out of the landmark 2015 nuclear accord negotiated with Iran in May last year.

“If Adel Abdel Mahdi fails in removing the US troops, his opponents will o, of course,se it to make him seem weak, just as they used the fact that Trump didn’t meet with him when he came,” he said. Iraqis, meanwhile, are more concerned with staggering unemployment, power cuts, and a political crisis that has left key ministries unmanned for months.

Very few showed up Friday at protests in Baghdad demanding an American pull-out, while hundreds turned out for demonstrations in the south of the country to protest a lack of public services.

“If Abdel Mahdi is unable to deliver services or jobs or water, or pick a defence or interior minister, then he has way bigger problems,” said Mansour. “If he succeeds in delivering in services, no one will care about US forces.”