In space, the US sees a rival in China 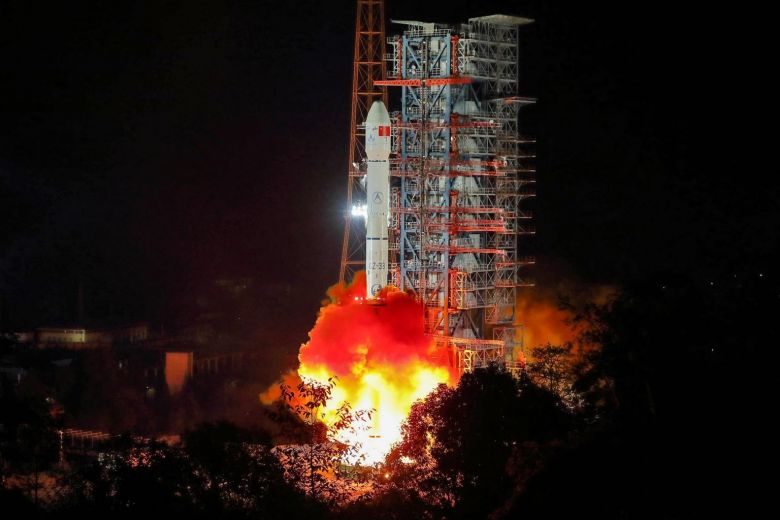 During the Cold War, US eyes were riveted on the Soviet Union’s rockets and satellites. But in recent years, it has been China’s space programs that have most worried US strategists. China, whose space effort is run by the People’s Liberation Army, today launches more rockets into space than any other country — 39 last year, compared to 31 by the United States, 20 by Russia and eight by Europe.

On Thursday it landed a space rover on the dark side of the Moon — a first by any country — and plans to build an orbiting space station in the coming decade. In the decade after that, it hopes to put a Chinese “taikonaut” on the Moon to make the first moonwalk since 1972. China now spends more on its civil and military space programs than do Russia and Japan. Although opaque, its 2017 budget was estimated at $8.4 billion by the Organization for Economic Cooperation and Development.

The mining of minerals or water on the Moon or on asteroids, notably to produce fuel for rockets, is still a long way off, but American start-ups are already working on it.

That’s far less than the $48 billion the United States spends on its military and civilian space programs, says analyst Phil Smith of consulting firm Bryce Space and Technology. But it is more than double Russia’s civilian space budget, which has been slashed to $3 billion.

Overcoming a lag of several decades, China’s leaders have very methodically replicated the stages of space development achieved by other great nations: a first satellite in 1970, its first manned space mission in 2003, the first docking of a manned spacecraft to an orbiting module in 2012, and activation of the BeiDou satellite navigation system, China’s answer to GPS.

“If they continue on this trajectory, they’re going to quickly eclipse Russia in terms of their space technology capabilities,” said Todd Harrison, an expert on military space programs at the Center for Strategic and International Studies in Washington.

China currently poses no threat to the commercial satellite launch market, which remains dominated by companies including US-based SpaceX and Europe’s Arianespace, and Russia. Nor has China’s progress in space exploration eclipsed that of the US. NASA’s head congratulated China on its Chang’e-4 Moon landing but a 2011 US law bars space cooperation with Beijing, although Congress could lift that restriction.

In the decade after that, it hopes to put a Chinese “taikonaut” on the Moon to make the first moonwalk since 1972.

The real rivalry is in two areas: in the short term, military uses of space; and long-term, the exploitation of resources in space. The mining of minerals or water on the Moon or on asteroids, notably to produce fuel for rockets, is still a long way off, but American start-ups are already working on it. Unlike the Cold War, the new conquest of space is unfolding largely in a legal vacuum.

In the 1960s and ’70s, Washington and Moscow negotiated several treaties on space, principally to guarantee scientific cooperation and to ban weapons of mass destruction in space. “The treaties are too vague to be really certain what the legal result is for something like space mining,” said Frans von der Dunk, a professor of space law at the University of Nebraska-Lincoln.

Moreover, they have been overtaken by new military technologies: anti-satellite lasers, cyberattacks, electronic jamming, and land-based anti-satellite missiles — like the one China tested in 2007. Laws of war govern conflicts on Earth, but there is no equivalent for space. And unanswered questions abound.

NASA’s head congratulated China on its Chang’e-4 Moon landing but a 2011 US law bars space cooperation with Beijing, although Congress could lift that restriction.

If one satellite collides with another in space, does that constitute an “attack”? What would be a proportional response? Civilian satellites should be protected from reprisals but what about satellites with dual civilian and military uses? How does a nation respond to a cyber attack of uncertain origin? “It’s very hard to distinguish between weapons and non-weapons in space,” said Jack Beard, a professor in the University of Nebraska’s space law program.

“It’s unfortunately hard to envision any major armed conflict on Earth not extending into space,” he added. “The Chinese have been preparing for whatever eventuality may be in the future, and… they have been experimenting with systems to interfere with our communications, our transmissions from satellites to drones.”

Harrison concurs: “The United States has not been keeping pace with the threats against our space systems,” and that has left the US vulnerable. Meanwhile, US dialogue with Beijing is virtually nil, in contrast with Washington’s exchanges with Moscow during the Cold War. “If there’s a crisis in space involving China, it’s not clear our military knows who to call,” said Harrison.

But other observers take a more skeptical view of portraying China as an aggressive adversary of the United States. Brian Weeden, of the Washington-based Secure World Foundation, said some proponents of the China-as-threat argument wield it as a way to get money for NASA out of a tight-fisted Congress.

They “think that will motivate the US to go off and do the stuff in space that they want to do,” he said. “They see the competition with China as a key to unlocking the political will and money to fund the projects they want to see.”

Will OBOR help China to overcome its economic crisis?

Pakistan should put its priority in securing ‘Strategic Assets’

Fighting COVID-19: Half of humanity being asked to isolate themselves