About 900,000 Indian troops present in Kashmir have imposed Hindu India's will on Kashmir. Troops continue to kill innocent Kashmiri youth to deter them from coming out on streets. This will prove counterproductive, however. 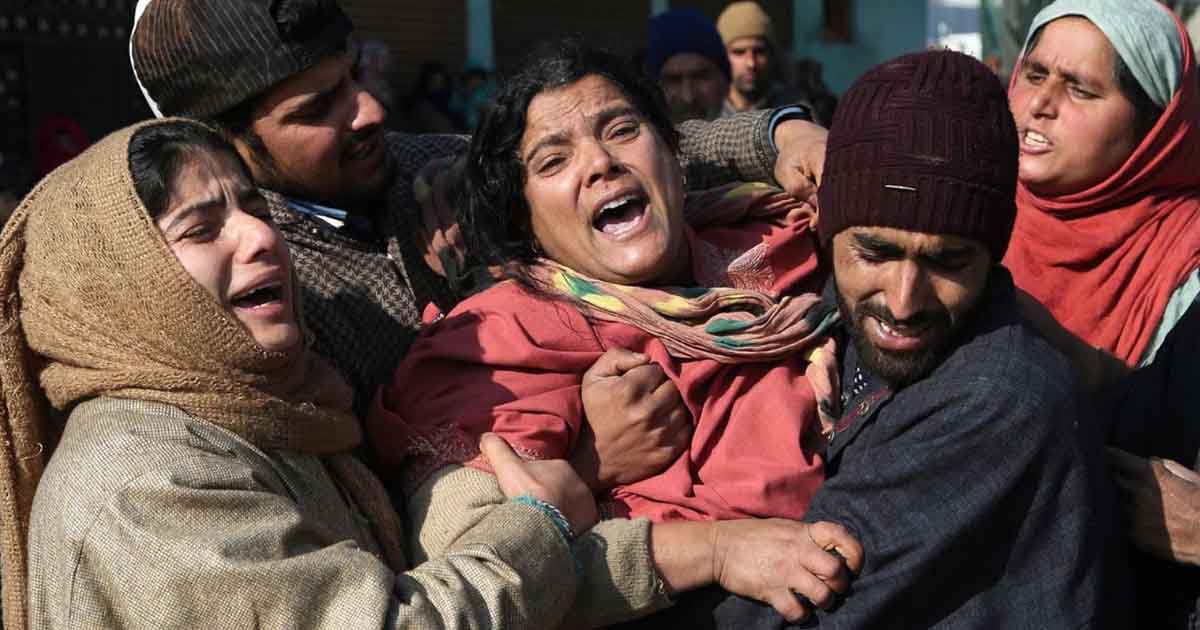 Indian troops in their fresh act of state terrorism martyred three more Kashmiri youth in Pulwama district of Indian Occupied Kashmir. The troops martyred the youth during a cordon and search operation at Diver in Tral area of the district. The operation continued till last reports came in. Analysts say fresh move is aimed at torpedoing the Muslim dominant character of the Kashmir Valley in the assembly through gerrymandering.

After revocation of special status of occupied Kashmir, India has planned to change Muslim majority character of the territory in the name of delimitation of Assembly constituencies.

Brutal killing. Basit Khan, a Kashmiri boy from Kupwara beaten to death in Jaipur. He was working in an event management company, and died at a hospital. #Kashmir pic.twitter.com/EhbpmBrMwd— Fahad Shah (@pzfahad) February 7, 2020

India had clamped communications blackout in occupied Jammu and Kashmir on Aug 5 last year after stripping the disputed region of its special status and placed it under a military lockdown.

It is important to note that India is on its way to becoming a Hindu extremist state. Since the electoral win of Indian Prime Minister Narendra Modi in 2014, the country has been undergoing a massive socio-political change and moving towards an extremist Hindu state. Media reports suggest that freedom is under threat in India where secular values are being replaced with extremist Hindu ideologies where religious minorities enjoy little space to practice their religious teachings.

Pakistan has been making all possible efforts to highlight the state of human rights in Indian occupied Kashmir where innocent Kashmiris are being targeted. Earlier, Prime Minister Imran Khan had called upon the United Nations Human Rights Council to immediately set up an independent investigation commission to probe human rights abuses in occupied Kashmir as recommended in the two OHCHR reports on the disputed territory.

A report was also issued by the UN expressing severe reservations over human rights violations in the valley. The report of the United Nations’ Office of High Commissioner on Human Rights (OHCHR) on Kashmir concluded that the situation in India occupied Kashmir is worst. Christine Chung, one of the authors of the report was invited to the event by the sub-committee.

Read more: Indian military actions in Kashmir: Can a war be ruled out?

It is worth noting here that the OHCHR issued its first-ever report on the situation in Kashmir June 14, 2018. The report highlights the protests after the martyrdom of Burhan Wani in 2016 and the brutal use of pellet guns against protesters among the human rights violations in Indian-held Kashmir. The report noted that Indian armed forces not only use force indiscriminately but also rape and humiliate Kashmiri women. A member of the European Parliament also called on India “to end violence against women & children in IOK. Voices of Kashmiri women & children must be heard.”

The international community has raised its concerns over the brutalities being committed by India. Recently, the European Parliament stood up for the people of Kashmir. “Members of the European Parliament called on India to immediately put a halt to its atrocities in Indian Occupied Kashmir and carry out investigations into the incidents of grave human rights violations.”

Back to pre-internet stone age in offline Indian Kashmir