Sardar Masood Khan, the President of AJK, apprised the media that India is likely to orchestrate another Pulwama-like incident to attack Pakistan and distract the international community from the human rights violations committed by Indian troops in occupied Kashmir. 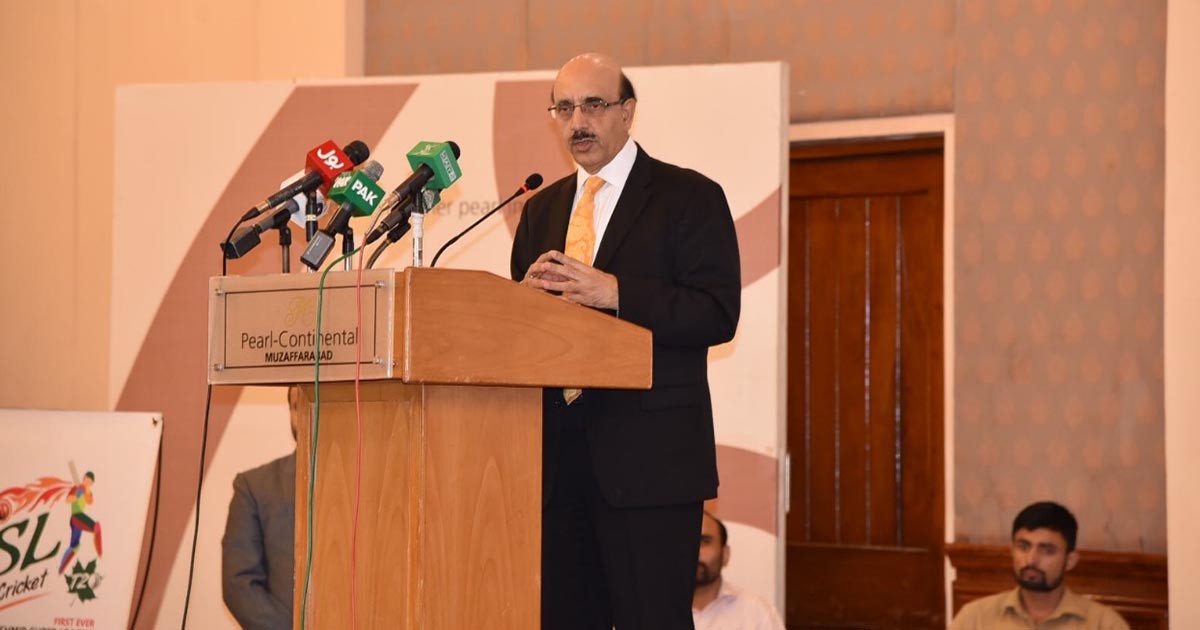 Sardar Masood Khan, President of Azad Jammu and Kashmir (AJK) on Thursday, said that India can orchestrate a Pulwama-like attack to escalate tensions with Pakistan, in a bid to divert the attention of the international community from the human rights violations committed across the Indian-occupied valley of Kashmir.

Addressing a delegation of the members of the Pakistan Media Club, prominent anchors and newsmen in Muzaffarabad, the President of Azad Jammu & Kashmir issued a stern warning, “If India attacked Pakistan, nine million Kashmiri people will stand like a rock wall in front of the Indian army.”

Masood Khan appreciated the decision of the United Nations Security Council (UNSC), to convene a special meeting on Friday to examine the situation in the occupied Himalayan valley. The AJK President urged the UN Security Council to make sure that its resolutions with regards to the disputed territory of Jammu & Kashmir are implemented in “letter and spirit.”

Masood Khan appealed to the UN Security Council to force New Delhi to abandon the genocide of innocent Kashmiris at the hands of the Indian army.

The President noted that the UN Security Council is responsible for establishing a lasting peace, resolving all disputes and bring an end to bloodshed. Masood Khan mentioned that India has defied UN resolutions and for the past seven decades, it has illegally occupied the territory. The recent decision to bifurcate the occupied region and establish Kashmir as “a neo-colony” is another gross violation of UNSC resolutions.

Masood Khan stated, “India’s action besides being a naked violation of Security Council resolutions, defies and tramples Geneva Convention and other international laws.” The President went on to state that the non-implementation of the UNSC resolutions requires the international body to deliberate new measures that will resolve the dispute.

He urged the UNSC members to understand the gravity of the conflict, and warned that South Asia cannot welcome lasting peace and stability unless the issue of Kashmir is resolved. The AJK President said, “The Security Council members will have to realize that Jammu and Kashmir conflict is the basic cause of tension between Pakistan and India.”

Cut off from the World

Apprising the media on the latest situation in the occupied valley of Kashmir, the AJK President noted that during the last 10 ten days, the region of Kashmir has been cut off from the world. The complete media blackout has denied any news from the occupied region.

He stated that the valley is facing a starvation-valley situation, an acute shortage of food supplies and life-saving medicines. Masood Khan stated that the Indian occupation army is also preventing the injured people from accessing local hospitals.

Masood Khan appealed to the UN Security Council to force New Delhi to abandon the genocide of innocent Kashmiris at the hands of the Indian army. He also urged humanitarian relief organizations to pave the way for a corridor that will ensure the supply of food essentials and medicinal supplies to the people of occupied Kashmir.

Masood Khan stated that India is pursuing a policy of aggression, and it is blatantly committing violent crimes against humanity, and the world refuses to hold India accountable for its actions.

Addressing young journalists, AJK President Masood Khan urged them to inform the world about the brutality and tyranny of the Indian occupation army against the innocent and unarmed Kashmiris using their pen and programmes. He said, “In the modern age, wars are not fought and won with weapons but with the power of media, and the young journalists should prepare themselves for this.”

Earlier this week, President Masood Khan sat down with Arab News for an exclusive interview, wherein he lashed at the United Nations for exhibiting a “deeply disappointing, lukewarm, and laid-back” response to the situation in occupied Kashmir after the Modi administration revoked its special constitutional status.

He added, “Pakistan has already said that it is not going to go to war. All the aggressive steps are being taken by India, so the UN should have rightly asked India to show restraint, responsibility and should have counseled it to reverse the steps it has announced.”

The AJK President also rebuked the international community and world leaders for failing to mount pressure on India due to “their own strategic, economic and political interests.” Masood Khan said, “India has deluded the world powers, particularly the western countries, that they are a force for good and have respect for diversity.”

Masood Khan stated that India is pursuing a policy of aggression, and it is blatantly committing violent crimes against humanity, and the world refuses to hold India accountable for its actions.

Myanmar: A flawed investigation into human rights abuses against muslims