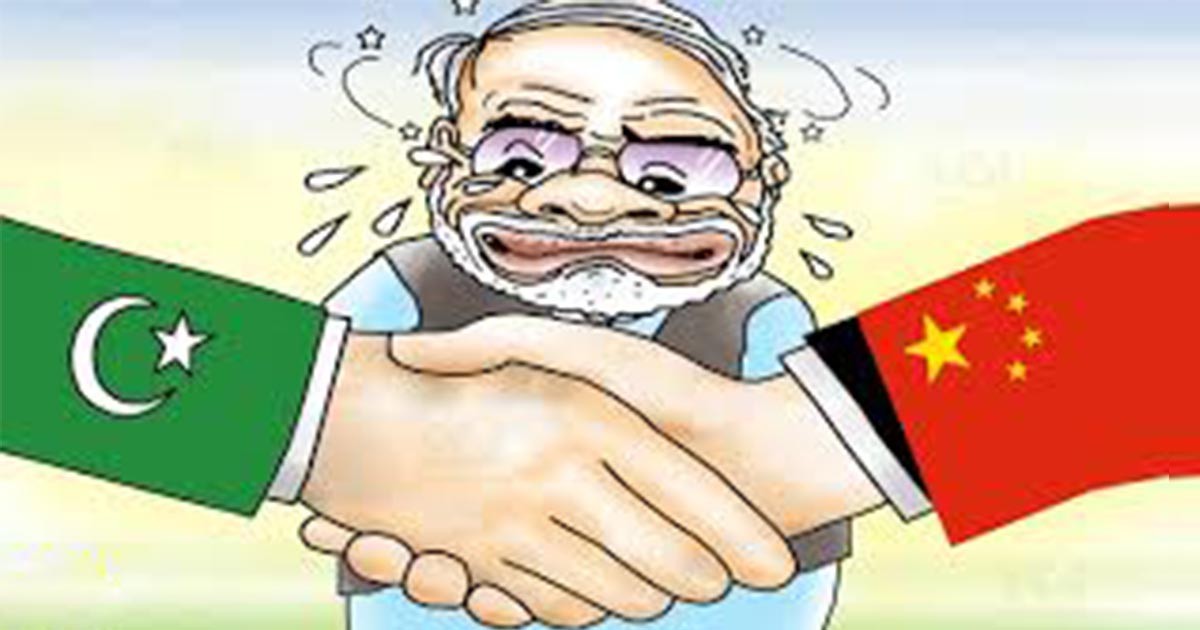 India media reports reveal that on Tuesday, New Delhi has issued a statement, asking Pakistan and China to end all CPEC-related activities in Azad Kashmir.

The statement was issued in light of China and Pakistan’s demand to put an end to all “unilateral actions that complicate the situation” in the disputed Himalayan territory of Kashmir, put forward in a joint statement released by Beijing and Islamabad on Sunday.

The joint statement, issued on Sunday after the visit of Chinese Foreign Minister and State Councilor Wang Yi concluded, noted that Pakistan and China are paying close attention to the ongoing situation in the occupied valley.

The two countries agreed that the China Pakistan Economic Corridor has entered a new phase of high-quality development.

The statement, as shared by MoFA, stated, “The Chinese side responded that it was paying close attention to the current situation in Jammu and Kashmir and reiterated that the Kashmir issue is a dispute left from history, and should be properly and peacefully resolved based on the UN Charter, relevant UN Security Council resolutions and bilateral agreements. China opposes any unilateral actions that complicate the situation.”

New Delhi, on Tuesday, issued a statement to reject China and Pakistan’s joint statement demanding an end to all unilateral actions in Indian-occupied Kashmir and urged both countries to put an end to all activities related to the China Pakistan Economic Corridor (CPEC) in Azad Kashmir.

Ministry of External Affairs (MEA): We reject the reference to Jammu & Kashmir in the Joint Statement issued by China and Pakistan after the recent visit of Chinese Foreign Minister. Jammu & Kashmir is an integral part of India. pic.twitter.com/29jFRqGkc5— ANI (@ANI) September 10, 2019

Raveesh Kumar, the spokesperson of the Indian Ministry of External Affairs, said, as cited by the Hindu, “We reject the reference to Jammu and Kashmir in the joint statement issued by China and Pakistan after the recent visit of Chinese Foreign Minister. J&K is an integral part of India.”

Kumar added, “India has consistently expressed concerns to both China and Pakistan on the projects in so-called China-Pakistan Economic Corridor, which is on the territory of India that has been illegally occupied by Pakistan since 1947.”

The Indian Foreign Ministry spokesperson said, “India is resolutely opposed to any actions by other countries to change the status quo in Pakistan-occupied Kashmir. We call on the parties concerned to cease such actions.

In the joint statement issued by China and Pakistan, Beijing reiterated its support for Pakistan’s right to safeguard its sovereignty and territorial integrity, alongside working to establish regional peace and stability.

The statement stated, “The Chinese side reaffirmed its support for Pakistan in safeguarding its sovereignty, territorial integrity, independence, and national dignity, in choosing its development path in light of its national conditions, in working for a better external security environment, and in playing a more constructive role in regional and international issues.”

In turn, Pakistan underscored that “Hong Kong affairs are China’s internal affairs” and stressed the policy of upholding international law and the “basic norms of non-interference in internal matters of other countries.”

Pakistan pledged to continue to internationalize the issue and highlight India’s escalated human rights violations at every forum.

The two countries agreed that the China Pakistan Economic Corridor has entered a new phase of high-quality development. The statement issued by MoFA stated in this regard, “The two sides agreed to continue to firmly push forward the construction of CPEC, complete its on-going projects in a timely manner, and realize its full potential by focusing on socio-economic development, job creation and better livelihood and accelerating cooperation in industrial parks and agriculture.”

Beijing and China also expressed satisfaction between their cooperation at multilateral level and their resolve to deep strategic coordination and consultation on regional and international affairs. The statement read, “The two sides underlined that a peaceful, stable, cooperative and prosperous South Asia is in the common interest of all parties. Parties need to settle disputes and issues in the region through dialogue on the basis of mutual respect and equality.”

38th Day of Curfew in Kashmir

The 38th day of the unprecedented curfew and communications blackout in the occupied valley of Kashmir began with a heinous act of state-sponsored terrorism, as the Indian troops gunned down a Kashmiri youth, identified as Asif, in the town of Sopore.

Reports shared by foreign and local journalists reveal an intense shortage of food supplies, healthcare facilities and money as the valley and its inhabitants continue to fall into the Dark Ages, and the restrictions imposed by the curfew continue to heighten. Journalists continue to share heart-wrenching images of innocent Kashmir civilians being picked up by Indian troops and brutally beaten up.

Harinder Bajwa, an Indian journalist reporting from the occupied valley, shared, “Visited homes where glass panes had been broken. The residents alleged the sec forces were barging in at night. Women complained that they were being told by the forces that they could now marry them. Fear amongst Kashmiris of their culture and identity being diluted.”

Visited homes where glasspanes had been broken. The residents alleged the sec forces were barging in at night. Women complained that they were being told by the forces that they could now marry them. Fear amongst Kashmiris of their culture and identity being diluted https://t.co/YmW5RrQczh

Reports emanating from the valley reveal interviews conducted amongst the locals of Kashmir, who are fearful for their lives and narrate terrifying stories of torture, electrocution and the fear of abduction and forced marriages of their female relatives.

“In more than 50 interviews, residents in a dozen villages in Kashmir told AP that the soldiers inflicted beatings and electric shocks, forced them to eat dirt, poisoned their food supplies, and threatened to take away and marry their female relatives” https://t.co/ETUztRmVIH— Gowhar Geelani (@GowharGeelani) September 10, 2019

In a statement issued by the Foreign Office, Pakistan has rejected all Indian attempts, including the recent briefing given by India’s National Security Advisor, Ajit Doval, which aims to portray a false impression of normalcy in Indian-occupied Kashmir.

The statement read, “Indian occupied Jammu & Kashmir continues to be the largest prison in the world with the heaviest deployment of Indian occupation forces since the coercive, unilateral and illegal Indian actions of 5 August 2019 aimed at altering the internationally recognized disputed status of IOJ&K and changing its demographic structure to preempt the results of a UN plebiscite.”

The statement lamented that despite Indian claims, the curfew imposed on the valley continues, and Hurriyat leadership remains under house arrest or imprisoned. Pakistan cited the reports published by international media platforms and credible human rights organizations and denied New Delhi’s false narrative of normalcy by demanding an end to the arbitrary arrests of innocent Kashmir’s and abductions of young Kashmiri boys.

Pakistan pledged to continue to internationalize the issue and highlight India’s escalated human rights violations at every forum.

Long Term Plan (LTP) of CPEC is a mystery

Turkey and China tie themselves in knots over Syria and Xinjiang