India is ‘Burning’ & Modi is ‘Responsible’

'The butcher of Gujrat', PM of India, Narendra Modi is leading India towards a fiery pit that means only destruction. Modi's extremist ties and Hindutva mindset have damaged India more than any foreign force. 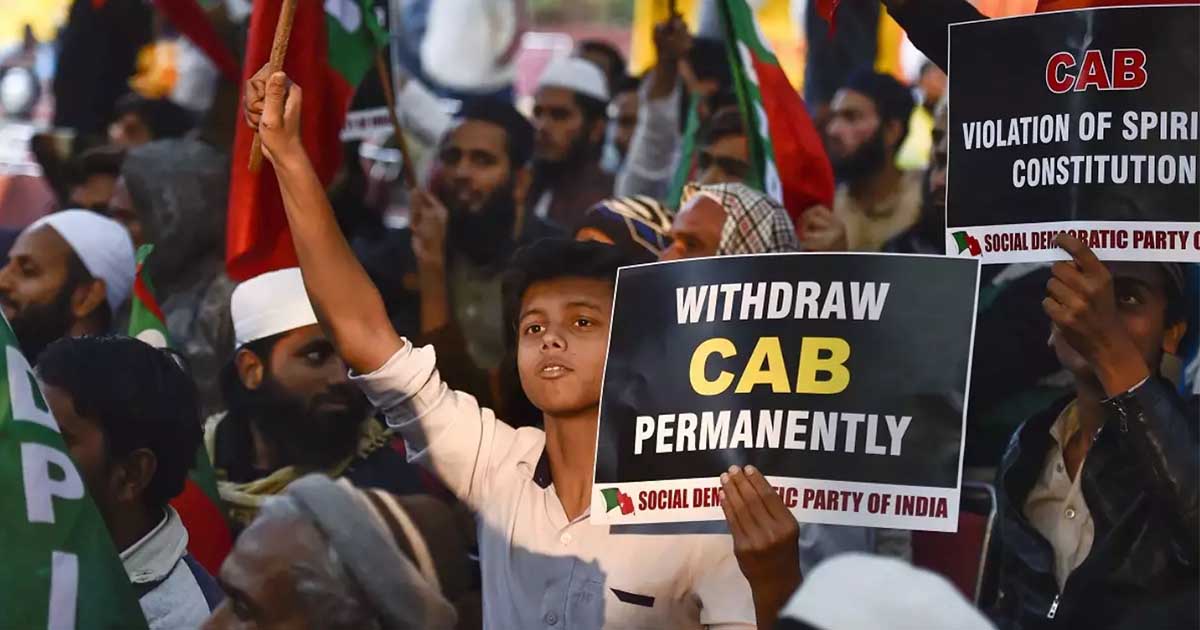 Indian Prime Minister Modi has a huge crisis on his hands entirely of his own making after some of the ethno-religiously diverse Northeastern States of the so-called ‘Seven Sisters’ are erupting in rage after the passage of the ‘Citizenship (Amendment) Bill’ that many fear will result in “replacement migration” against the indigenous population there, which risks triggering a chain reaction of violence in the sharply divided ‘Indian Balkans’ that might even spread to neighboring Bangladesh in the worst-case scenario.

India’s Northeastern States of the so-called “Seven Sisters” have historically been unstable ever since independence owing to the often-overlooked fact that their incorporation into the country was historically unprecedented and represented nothing more than the continued legacy of British rule in the subcontinent, but this ethno-religiously diverse and sharply divided region that can rightly be described as the “Indian Balkans” is at risk of collapsing into a chain reaction of violence after the central government passed the “Citizenship (Amendment) Bill” (CAB).

This contentious piece of legislation grants citizenship to non-Muslims from neighboring countries who migrated (oftentimes illegally) to India over the decades under the pretext of escaping persecution and also enables the fast-tracking of citizenship to those that plan to make this move in the future for the same supposed reason.

Beyond the fact that this piece of religiously influenced legislation goes against the secular principles of the Indian Constitution but was pushed through anyhow because of the ruling BJP’s Hindutva-driven quest to transform their country into a “Hindu Rashtra“, the other reason why it’s so controversial is because it could demographically re-engineer the “Indian Balkans” through the state-supported policy of what Ivy League scholar Kelly M. Greenhill would recognize as “Weapons of Mass Migration“.

More specifically, the “Seven Sisters” — and especially regional leader Assam which comprises the lion’s share of the “Indian Balkans'” population as well as tiny Tripura — already fear that their indigenous cultures will be replaced by the one from neighboring Bangladesh after the large-scale (and allegedly illegal) migration of Muslim Bengalis since the early 1970s.

The locals are therefore mostly in favor of the central government’s “National Register of Citizens” (NRC) initiative to identify and deport what has been determined to be nearly 2 million people.

The Roots Of Assamese Rage

It doesn’t matter to the native Assamese and others that there’s the credible chance that the government will abuse the NRC to ethnically cleanse an “unwanted” demographic from that region and other parts of the country at large, to say nothing of the troubling means through which they’ll be deported by first being interned in what some have described as “concentration camps“, since they — whether legitimately or not — fear that their local identity is being destroyed by migrants.

That’s why it was so surprising to many of them that the central government then turned around and facilitated the influx of potentially countless illegal immigrants under the pretext of protecting them from religious persecution, especially considering that it’s expected that the many people who would take advantage of this new law will probably be Bengalis, albeit non-Muslim ones (or potentially even Muslims masquerading as non-believers for “convenience’s sake”).

The reader should be made aware that the Assamese (which are being focused on in the context of this analysis by virtue of their overwhelming demographic influence in the region) have felt “under siege” for years after they saw the original borders of their post-independence (or rather, post-unification-with-India) state gradually shrink as a result of the central government’s domestic political-administrative reforms that led to the creation of new entities in the areas of Assam there were mostly populated by minority groups like the Nagas.

It’s a very complex history to summarize, but everything can be simplified by explaining that this part of India had mostly always remained out of the control of those in the so-called “mainland” until the British occupation merged them together into a single political unit.

The era of decolonization that swept the globe after World War II saw many of the non-Assamese people in the Northeast agitating (sometimes violently) for either recognition as a separate state within India so as not to be ruled by the Assamese or outright independence in a cycle of violence that continues to this day and still flares up from time to time.

The “Balkanization” Of The “Indian Balkans”

It’s beyond the scope of this analyses to describe each of the relevant movements in depth, but the main ones are the United Liberation From of Assam (ULFA), several Naga groups that are currently negotiating a secretive peace with the central government that non-Nagas in the surrounding areas fear will infringe on their political and cultural sub-state sovereignty, and the National Democratic Front of Bodoland (NDFB) that’s pursuing dual separatism from both Assam and India as a whole.

New Delhi recognizes the Assamese and Bodo groups as terrorists but both organizations predictably reject this label. In any case and regardless of however one feels about their causes, there’s no denying that they resonate with an influential segment of the population, and it’s the Assamese variant that’s coming back to the surface after CAB unilaterally changed the terms of the Assam Accord of 1985 previously agreed to in response to regional unrest over illegal immigration from Bangladesh and which originally decreed that only those who entered the state before 25 March, 1971 could receive citizenship.

To make a long story short, a critical mass of Assamese feel betrayed by the BJP, which explains why some of them lost control of themselves and started rioting by attacking the house of the Chief Minister and some of his ruling party allies and even burning railway stations, resulting in the central government having to cut off the internet and urgently dispatch several thousand troops from occupied Kashmir to the restive region.

An indefinite curfew has also been imposed in several districts as well. The immediate security implications of this crisis are extremely worrisome for the central government since too heavy-handed of a response to the riots could provoke an even stronger backlash by radicalizing the comparatively “moderate” elements of the population, though sitting back and letting events naturally unfold could also lead to a resurgence in separatist sentiment.

Assam is absolutely crucial to India’s grand strategy because it functions as the country’s overland gateway to ASEAN with which New Delhi has been trying to integrate more closely through its “Act East” policy.

Is Bangladesh About To Blow?

In pursuit of this, it recently compelled neighboring Bangladesh — which for all intents and purposes has been practically transformed into an Indian proxy state in recent years owing to the increasingly authoritarian ruling party’s submissiveness to New Delhi — to sign a secretive set of agreements in October that many in the country fear amounts to an unprecedented sellout of their sovereignty in order to facilitate their neighbor’s transshipment across their territory to the “Seven Sisters” and beyond (remembering that the latter are linked to “mainland” India by the 22-kilometer-wide Siliguri Corridor commonly referred to as the “Chicken’s Neck”).

Bangladesh has been boiling for the past few years, and each perceived slap in the face of its people’s dignity by India is pushing that densely populated nation of approximately 160 million people closer to an anti-government uprising, which is another reason why the latest unrest in the Northeastern States is so serious of a regional security threat because Bangladeshis risk bearing the brunt of the Assamese’s increasingly violent nationalist outrage against New Delhi’s pro-migrant CAB.

The worst-case scenario that could transpire is if the violence continues to worsen to the point where Bengalis are attacked by Assamese mobs and the pro-Indian government in Bangladesh is forced by rising domestic anger to address the issue against the will of its foreign patron, which could catalyze a fast-moving series of developments that reverse New Delhi’s proxy control over Dhaka and potentially even result in an explosion of separatism all throughout the “Indian Balkans” by encouraging movements such as the Naga, Bodo, and other ones to take advantage of this “opportunity”.

It can only be speculated at this point how far everything could go and whether violence might even spill over into neighboring Myanmar (which already holds the ignoble distinction of suffering the world’s longest civil war), but what’s clear at this point is that the “Indian Balkans” are definitely burning, and Modi has nobody to blame but himself after pushing through such a provocative piece of legislation that many had already predicted would result in such an outbreak of regional unrest.

Andrew Korybko is a political analyst, radio host, and regular contributor to several online outlets. He specializes in Russian affairs and geopolitics, specifically the US strategy in Eurasia. His other areas of focus include tactics of regime change, color revolutions and unconventional warfare used across the world. His book, “Hybrid Wars: The Indirect Adaptive Approach To Regime Change”, extensively analyzes the situations in Syria and Ukraine and claims to prove that they represent a new model of strategic warfare being waged by the US.

Previous articleDeadpool vs Wolverine: The heat is getting stronger
Next articleShoora e Hamdard steps up to fight against climate change

30 July 2021
Previous articleDeadpool vs Wolverine: The heat is getting stronger
Next articleShoora e Hamdard steps up to fight against climate change

Everyone can be Indian Citizen Except Muslims: Amit Shah talks Poison