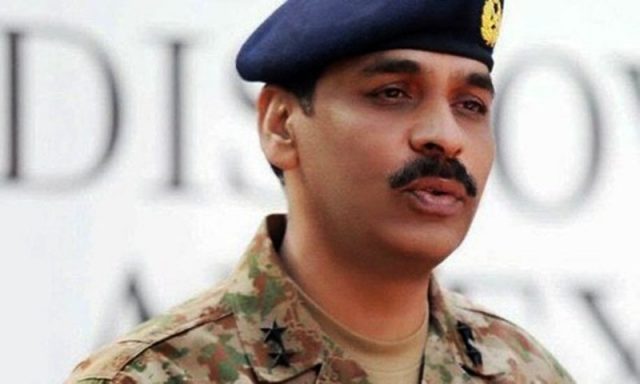 Major General Asif Ghafoor, Director General of the Inter-Services Public Relations (ISPR) — the media wing of the Pakistan Armed Forces has cited the threat from India as perpetual. While talking to the Middle East Daily Gulf News, the DG expressed his confidence that Pakistan had eliminated all terrorist havens from its soil.

The DG ISPR talked about Pakistan’s success in the war against terrorism, Pakistan-India relations and the possibility of peace between the two countries. He also discussed Pakistan’s relations with the UAE and the $54-billion China Pakistan Economic Corridor (CPEC) project, which will link Pakistan’s Gwadar Port with China.

To a question about the possibility of peace between India and Pakistan, DG ISPR said he believed that all issues between the two nuclear-armed countries need to be resolved to normalize the bilateral relationship. When he was asked if the Pakistan Army is still “India focused”, Ghafoor said that “threat from India is perpetual”.

In the end, it seems that the life and death struggle between India and Pakistan has taken a more violent turn as New Delhi tries to unleash forces of terror to burn up its rival from the inside.

“India has been busy in fomenting unrest through terrorism using Afghan soil,” he told the publication, mentioning, Kulbhushan Jadhav, an Indian spy currently in Pakistan’s custody, as an example. “So we are not having any let-up in safeguarding against Indian threat.”

“While threat remains from India, both in conventional and sub-conventional domain, our biggest challenge is to maintain this stability with the threat still residing inside Afghanistan coupled with economic difficulties.” DG ISPR said. He added; “Pakistan has a strong and combat-hardened professional standing armed forces ready to thwart and defeat any threat. We are a responsible nuclear power with over 200 millions resilient Pakistanis,” said the spokesperson.

Read more: Pakistan prepared for any US action: DG ISPR

With reference to the Kashmir dispute, he said that Pakistan’s desire for peace should never be mistaken as its weakness. “For a normalized Indo-Pak relationship, all issues including the core issue of Kashmir between the two nuclear countries need to be resolved. India needs to behave like a responsible country, stop atrocities on both sides of the Line of Control and also discontinue interference inside Pakistan through state-sponsored terrorism.”

To a question as what measures has been taken to eliminate terrorism from Pakistan, he said the country has fought a successful war against terrorism — a war which entered Pakistan through the 2,611-km scantily manned Pak-Afghan border when US-led coalition forces started military operations in Afghanistan against AQ [Al Qaida]. Whereas there are no more organized sanctuaries, for elimination of remaining disorganized scanty residual presence of militants, Operation Raddul Fasaad, a largely intelligence-based operation is in progress, he said.

Many analysts in Pakistan interpreted Modi’s remarks as his confession to supporting Baloch insurgents’ terrorism in Pakistan. In 2015, India’s then-Defense Minister Manohar Parrikar said, “Terrorists have to be neutralized only through terrorists.”

On the China-Pakistan Economic Corridor (CPEC), Ghafoor said enemies of peace and of Pakistan were trying to scuttle the multi-billion dollar project. However, Pakistan would go to any extent to foil their nefarious designs, he added. The DG ISPR said that Pakistan Army has the responsibility for security of the project, which is engine of progress not only for Pakistan but for the region.

Pakistan has long been a target of Indian supported terrorist campaigns since its independence. In April 2017, Islamabad released a video confession of a senior militant leader who exposed how multiple terrorist groups, including the TTP, cooperated with Indian and Afghan intelligence agencies. The Pakistani military showcased the video of former TTP spokesperson Liaquat Ali, also known as Ehsanullah Ehsan, admitting that the TTP had received funds from India and launched terrorist attacks inside Pakistan on behalf of New Delhi.

MQM has been accused of terrorism for its use of extra-legal activities in conflicts against political opponents. The party’s leader Hussain is believed to have been using militants in Karachi to carry out terrorist attacks and disturb the peace within the country.

In 2015, a senior police officer held a highly publicized news conference in which he presented a self-confessed terrorist who confessed of ties to MQM. The presumed terrorist also admitted to being trained by the Research and Analysis Wing (RAW), an Indian intelligence agency, specifically to launch terrorist attacks in Karachi.

To a question about the possibility of peace between India and Pakistan, DG ISPR said he believed that all issues between the two nuclear-armed countries need to be resolved to normalize the bilateral relationship.

Kulbushan Jadhav was caught in the act by the Pakistani security officials in an intelligence borne operation in March 2016. After his confession of involvement in subversive activities inside Pakistan, he was sentenced to death earlier this year. It was a veritable proof which gave credence to Pakistan’s oft-repeated yet neglected narrative about India’s inimical activities inside Pakistan.

The same year, Indian Prime Minister Narendra Modi released a statement in which he strongly affirmed his country’s support for the Baloch insurgency in Pakistan. Many analysts in Pakistan interpreted Modi’s remarks as his confession to supporting Baloch insurgents’ terrorism in Pakistan. In 2015, India’s then-Defense Minister Manohar Parrikar said, “Terrorists have to be neutralized only through terrorists.”

In 2013, U.S. Senator Chuck Hagel, former U.S. President Barack Obama’s nominee for Secretary of Defense, confirmed that India “has always used Afghanistan as a second front against Pakistan. According to U.S. intelligence reports, “India has over the years been financing problems in Pakistan,”

In the end, it seems that the life and death struggle between India and Pakistan has taken a more violent turn as New Delhi tries to unleash forces of terror to burn up its rival from the inside.

APEC summit: The rise of China?