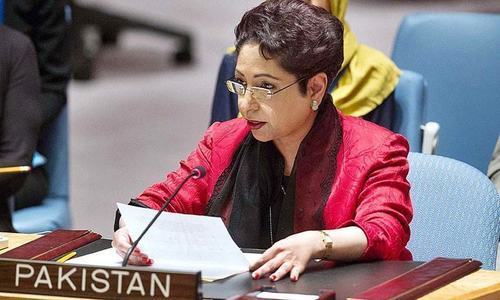 Dr. Maleeha Lodhi, Pakistan’s envoy to the United Nations, has vociferously and adamantly rejected Indian labeling of Pakistan as an ‘exporter of terrorism’.

Sushma Swaraj, Indian minister for external affairs, had mocked Pakistan in her UNGA statement on Saturday 23 September and said:”We produced scholars, doctors, engineers. What have you produced? You have produced terrorists.”

At a time when the world has more buyers of the Indian narrative, a concerted effort to present the Pakistan version by blazing all guns is imperative and prudent

However, Maleeha Lodhi, the veteran journalist, academic and diplomat said that India has long been a sponsor of terrorism in Pakistan and the region. She called India the ‘mother of terrorism’, she said India uses terrorism as an instrument of state policy. “India has long been a sponsor and practitioner of state-terrorism. Over the last half-century, India has sponsored and perpetrated terrorism and aggression against all its neighbors. Indian spy Kulbhushan Yadav has confessed of committing terrorism in Pakistan. All this points to the fact that India is the ‘Mother of Terrorism’,” said the diplomat.

Read more: Beijing calls for talks on Kashmir but will India oblige or…

Kulbushan Jadhav was caught in the act by the Pakistani security officials in an intelligence borne operation in March 2016. After his confession of involvement in subversive activities inside Pakistan, he was sentenced to death earlier this year. It was a veritable proof which gave credence to Pakistan’s oft-repeated yet neglected narrative about India’s inimical activities inside Pakistan.

Dr.Lodhi, bringing her vast experience in diplomacy and international Relations, reminded the UN that Kashmiris are well within their right to receive moral and political support in exercising its right of self-determination

Dr. Lodhi reminded India that instead of browbeating and destabilizing Pakistan, it should focus on its internal problems since a dozen or so insurgencies are festering within India itself. She also said that Swaraj wrongly said that Pakistan impeded the dialogue process, for it was India who suspended it in 2015.

Dr.Lodhi was lucid and unequivocal in enshrining upon how India perpetrates violence. “Indian political luminaries belong to a political organization which has the blood of thousands of Gujarat on their hands,” said Lodhi while talking about the government plays into the hands of the RSS. She went on to say that Muslims and Christians live in terror in the country wondering where the next assault will come from. India was ruled by a government that was ‘racist and fascist’.

Maleeha Lodhi also gave a strong rejoinder to Indian claims over Kashmir, being a part of India. Speaking in the General Assembly, She reminded India it was illegally occupying the valley, while terming the country’s refusal to implement the resolutions of the Security Council, as being tantamount to deception and aggression.” India cannot hide behind semantics,” said Dr.Lodhi while adding that morality has no sell-by date.

Dr. Lodhi said that India is acting as a predator and if it continues to elude abiding by the law, the logic of force will be applicable. She reiterated Prime Minister Abbasi demand of UN appointing a representative to ensure that the resolutions of the Security Council are implemented. Here it needs to be stressed that India has ignored all pleas to hold a plebiscite in the valley. Dr.Lodhi was quick to point out the indiscriminate use of pellets and other means of force against innocent Kashmiris.

Dr. Lodhi joined into the fiery war of words going on between India and Pakistan in the 72nd Session of the General Assembly. She pointed out that Delhi wanted to divert world attention from the brutalities that its occupation forces are committing to innocent people in Indian-held-Kashmir.

Dr. Lodhi reminded India that instead of browbeating and destabilizing Pakistan, it should focus on its internal problems since a dozen or so insurgencies are festering within India itself

Sushma Swaraj, in her diatribe against Pakistan, had said that Pakistan cannot talk about humanity while exporting havoc, death, and inhumanity.”Pakistan is recognized only as a pre-eminent export factory for terror,” she said while addressing the UNGA on Saturday.

Tensions between both countries continue to simmer over disputed Kashmir and firing over the working boundaries. Pakistan has repeatedly rejected Indian claims of stoking terrorism in the Kashmir valley, terming the indigenous struggle as a legitimate effort to overthrow the Indian occupiers. Dr. Lodhi, bringing her vast experience in diplomacy and international Relations, reminded the UN that Kashmiris are well within their right to receive moral and political support in exercising its right of self-determination. India, however, considers Kashmir a part of the Indian Union, calling it as “atoot ang”.

Maleeha Lodhi, the veteran journalist, academic and diplomat said that India has long been a sponsor of terrorism in Pakistan and the region

Tensions have continually flared up since the martyrdom of Burhani Wani. The effects of the resistance against Indian forces have been visible on the Line of Control as both forces continually trade fire of various calibers. Dr. Lodhi had last year said that the attack on the military base in Uri in 2016 had all the hallmarks of a false-flag operation designed for India to attain tactical goals having strategic underpinnings. The attack was followed by India’s tirade against Pakistan and an alleged surgical strike across the LoC.

The timing of the attack had all the indications of it being a diversionary tactic. Besides, it was an effective way to put the brunt of the event and the burden of escalation on Pakistan.

Dr.Lodhi’s rejoinder was in-line with Pakistan’s strategy throughout Prime Minister Abbasi’s trip to the US. Pakistan’s newly-elected premier focused the thrust of his speech and interviews on unveiling Indian aggression in Kashmir and its threats to Pakistan’s security and regional stability. At a time when the world has more buyers of the Indian narrative, a concerted effort to present the Pakistan version by blazing all guns is imperative and prudent.

The distinguishing feature of this speech was how firmly Dr.Lodhi delved on Indian atrocities in not only Kashmir but also its Hindutva-infested politics throughout the country. Amid the on-going war of narratives, this reference was much-needed but was missed in past speeches.