India isolated by One Belt One Road Initiative 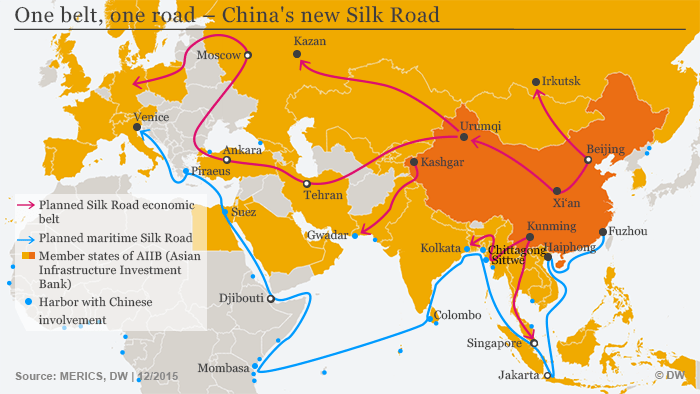 From the Indian perspective, today’s announcement by Chinese Foreign Minister Wang Yi that Beijing and Islamabad are open to extending the China-Pakistan Economic Corridor to Afghanistan dramatically changes the power dynamic in the region. Wang was speaking at a press conference following the first meeting in Beijing today of the newly created China-Afghanistan-Pakistan Dialogue format at foreign minister level, which has been a Chinese initiative. (Xinhua)

Some early deductions are possible. First, for the first time in the region, China is deploying the Belt and Road Initiative to leverage regional security and stability in South Asia. Of course, the economic aspects are there in terms of connectivity, infrastructure development, expansion of trade and investment and so on, but if Kabul becomes a CPEC partner, something fundamentally changes in the 3-way Afghan-Indian-Pakistani equation. That this would be happening under China’s mentorship is important.

President Vladimir Putin disclosed on Monday that during a phone conversation with his Turkmenistan counterpart, the subject of the TAPI gas pipeline project came up.

Second, India is getting surrounded by BRI projects – north, east, south, and west. It lacks the energy and resources to project and sustain a counter-strategy. All we are left with is our vacuous negative propaganda to malign the BRI for which there are no takers abroad. By implication, Afghanistan is rejecting India’s notions of “territorial sovereignty”, et al. At the same time, China’s interest in Indian participation in the BRI is self-evident. Time is running out for India. New thinking is needed urgently.

Third, Wang’s statement in Beijing on Monday during a media briefing on the agenda for Chinese diplomacy in the coming year singled out North Korea and Afghanistan as two regional problems where China intends to push for peacemaking. Today’s disclosure fits in with that. The trilateral format may eventually provide the platform for a regional initiative. The joint press release issued after today’s meeting called on the Taliban “to join the peace process at an early date.”

Read more: The Abe-Modi summit was really an anti-OBOR summit

Fourth, China is displeased that the US is seeking a military solution to the conflict in Afghanistan. The Trump administration is pursuing a dangerous strategy that can destabilize the entire region surrounding Afghanistan. But China will not confront the US, either. Instead, China is introducing a counter-narrative. The US will increasingly find itself in a false position by threatening Pakistan even as Afghanistan is edging toward the CPEC to “conduct win-win trilateral economic cooperation”.

Finally, there is a high degree of foreign-policy coordination between Beijing and Moscow. We must anticipate that it is a matter of time before Russia evinces interest in the CPEC in one form or another.

Fifth, the geopolitical implications are profound. Wang today outlined that the CPEC will eventually extend northward to link with the China-Central Asia-West Asia Economic Corridor (CCWAEC), which connects China with the Arabian Peninsula. The CCWAEC starts from China’s Xinjiang and traverses Central Asia before reaching the Persian Gulf, the Mediterranean Sea and the Arabian Peninsula. It crosses the five Central Asian countries and 17 countries and regions in West Asia (including Iran, Saudi Arabia and Turkey). It is a vast landmass, which is rich in resources but backward in infrastructure.

Finally, there is a high degree of foreign-policy coordination between Beijing and Moscow. We must anticipate that it is a matter of time before Russia evinces interest in the CPEC in one form or another. President Vladimir Putin disclosed on Monday that during a phone conversation with his Turkmenistan counterpart, the subject of the TAPI (Turkmenistan-Afghanistan-Pakistan-India) gas pipeline project came up.

“He invites us to participate. Generally, certain projects are indeed implemented there, and quite successfully, including by Turkmenistan. But we must take a look, of course, at how feasible projects of this kind will be,” Putin has been quoted as saying.

Indeed, the bottom line is that the tense relations with Pakistan — and the downhill slide in the relations with China — through the past 3-year period virtually shut India out of the power dynamic in the region and reduces it to a lone bystander. The scenario looks pretty bleak.

Communication is important for Pak-US ties: US Diplomat Alice Wells

Middle Class: Its economic prosperity, a myth or reality?