India must not test Pakistan’s resolve, it’s not 1971: DG ISPR 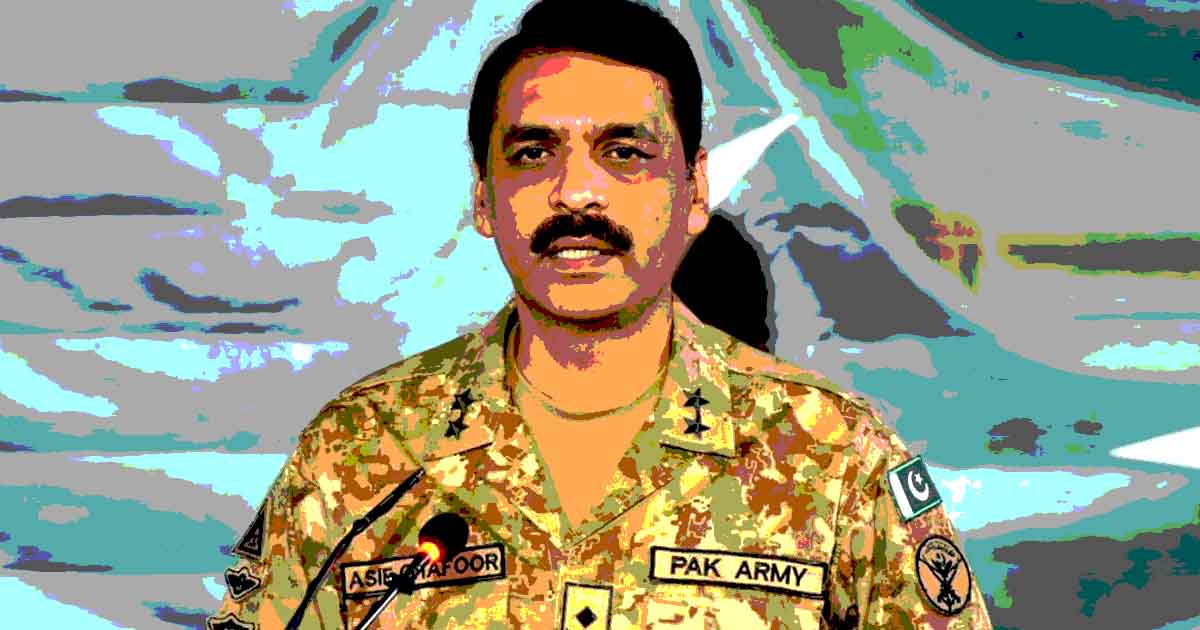 Director General Inter-Services Public Relations (ISPR) Major General Asif Ghafoor warned on Monday that India must not test Pakistan’s resolve as it was not 1971, adding neither the army nor the circumstances were the same anymore.

“Don’t test our resolve … Let me remind that it’s not 1971. Neither the army nor the circumstances are the same anymore,” the DG ISPR said. He was sharing his views while addressing the media regarding the recent tensions between India and Pakistan and other security matters.

Gen Ghafoor said that India has been lying for the past two months and Pakistan has shown responsibility despite these lies. The army’s media wing’s spokesman said that Pakistan foiled India’s airstrike but the neighbors have continued to lie despite evidence which exposes their lies. During the press conference, Ghafoor said that if today’s media was present during the 1971 war, East Bengal and West Bengal would not have split up.

The chief of the military’s media wing appreciated the role played by the Pakistani media during the war against terror in the past two years, and during the three-day conflict with India in February. “The media played the best possible role in the situation and I would like to thank you for it,” he told the journalists present.

The military spokesman reiterated that none of Pakistan’s F-16’s were missing which was also proven by a report in an American news publication. He said that India is holding elections and a lot of rhetoric is used in elections, adding that talking about nuclear weapons so casually is not advised as a country’s nuclear capability is a matter of deterrence.

“The truth is that there was an incident in Pulwama. Attacks on the police in Pulwama have happened before … There was no damage at our end in Balakot. We took local and foreign media there to show them [the truth],” Gen Ghafoor said, “we will facilitate Indian media if they choose to come to Balakot to see the truth.”

Pointing other lies, he said, the US stated that there were no F-16s missing from Pakistan’s fleet. Referring to Pakistan’s counter strike, the DG questioned that India has not revealed what happened in Pakistan’s counter-strike and who was at the brigade headquarters when Pakistan conducted the strike.

Read more: Why ‘freedom of speech’ doesn’t exist for PTM in Pakistan?

“On 28th [February] when India was preparing to fire missiles, what happened at the Line of Control that night? How many gun positions did you have to change?” he continued. He said that Pakistan army and 207 million Pakistani were ready to give befitting response to any Indian aggression.

“We are waiting for the appropriate time to honor our pilots who downed the Indian planes,” he announced in the presser. Before moving to some other topics, he said, India should decide if it was interested in war or eliminating poverty from the region.

“On the PTM website, they have got a number that states the amount of funds they have collected from Pashtuns around the world. But tell us how much money did you get from the NDS to run your campaign? How much money did RAW give you for the first dharna in Islamabad?

“Why did NDS give you funds for Arman Loni’s funeral and the dharna that followed? If you have these funds, why don’t you use them for the development projects,” he said. In addition, he said, funeral prayer of Loni were even offered in Afghanistan but the PTM leadership did not go to the funeral prayers of the 10 policemen who lost their lives trying to protect 800 students giving police entry exams in Balochistan. “No namaz-i-janaza was held for those 10 men in Afghanistan,” he said.

While questioning the political movement regarding the source of their funding, he said “what revenge are you seeking from the army.” He made it clear that no one can fight with the state and the restraint was being shown only because army was told to deal gently with PTM since day one.

Subsequently, he delivered a message in Pushto language to Pushto-speaking people, urging them to not be deceived by the people functioning against Pakistan’s interests.

PTM is a rights-based alliance that, besides calling for the de-mining of the former tribal areas and greater freedom of movement in the latter, has insisted on an end to the practices of extrajudicial killings, enforced disappearances and unlawful detentions, and for their practitioners to be held to account within a truth and reconciliation framework.

The ISPR chief individually responded to the demands made by the PTM at its rallies and meetings. “When we took action against the TLP (Tehreek-e-Labbaik Pakistan), people said that why is action not taken against PTM as they speak up too much as well,” he said.

Referring to 25 million out-of-school children, the DG said that these children then go to the 30,000 madressahs that exist in Pakistan at the moment. He revealed that less than 100 out of the total madressahs were found to be the kind that were pushing children towards extremism.

“So out of 30,000 only 100 are faulty and if these were shut, what will happen to the millions of children who go to these madressahs,” he questioned, adding that the madressahs offer eight years of studies in a Dars-e-Nizami with two additional years to give them the title of a Mufti.

“But when these children come out of these madressahs, what job opportunities await them,” he asked. He said that some of the madressahs do offer some contemporary education but very few of these children qualify for some basic level jobs, like procuring a commission in the army.

Elaborating further, he said that the effort would require funding to employ teachers in these madressahs. He said that shortage of funds was an issue in the past but now when the war against terror is coming to an end, it was possible to reroute the funds towards this process.”

No Terrorist Organization in Pakistan Anymore

Explaining about the action taken against proscribed organizations, the DG said that “I can now say with confidence that there is no terrorist organization in Pakistan anymore. We have banned violent extremist organizations and we have been working to curb terrorism in Pakistan.”

Highlighting Pakistan’s regional importance, he said, “the state was busy conducting kinetic operations and every law enforcement agency was busy in that, which is why we were not able to strategize against these [banned] organizations the way we are doing today.”

He said that Afghanistan has been plagued with war for the last 40 years, first with the Soviet occupation and then with the US army after 9/11, yet cooperation with Afghanistan has been going throughout this time. This can be seen through the fact that at least 81,000 Pakistani soldiers have lost their lives in these operations to date, he said.

In 2014, he said, when the National Action Plan was formulated, all political parties had agreed on point which said that bringing these elements into the mainstream will be taken care of.

On January 1, he added, a strategy was made on how to bring these people or organizations into the mainstream but no funds were allocated towards this. In February, when the scheme was announced, a fund was also allocated towards it by the government for the first time. “It was then decided that madressahs and hospitals, which are non-violent and being run under these organizations will be brought under the government’s banner,” he said.

Gen Ghafoor noted that radicalization took roots in Pakistan due to the impact of the Afghan jihad and the Iranian revolution. “After 9/11, international powers wanted to pressure Pakistan to devise policies according to their will,” he said, “terrorism came to Pakistan when international forces started the operation in Afghanistan. Since 9/11, Pakistan has conducted a large number of kinetic operations against terrorist organizations.”

“Now, we can say with evidence that there is no organized terrorist infrastructure in Pakistan,” the DG ISPR asserted. He said that Pakistan shares intelligence with 70 countries.

‘Support for our Kashmiri Brethren Runs in Our Blood’

At the start of the presser, he said India had accused Pakistan of being behind the Pulwama attack in occupied Kashmir and Pakistan had denied the same. “We told them we were not involved. India then violated our airspace, we then gave the ultimatum that we will respond when we see fit, just like the PM said.”

“We have inherited the Kashmir issue from our inception. It is linked to our ideology and we will continue to do what we can for their liberation,” he said, adding “we need to solve all our disputes and Kashmir tops the list.” He further said that India should decide now whether it wanted a repeat of February 27 or ready to work to eliminate poverty in the region.

Previous articleMore embarrassment for India: US refuses to share information on F-16
Next articleViolence in the Courts: How can the Academy be helpful?

21 September 2021
Previous articleMore embarrassment for India: US refuses to share information on F-16
Next articleViolence in the Courts: How can the Academy be helpful?

Gen. Bajwa in China to assure Chinese investor about the future of CPEC